To dispel rumors of my death, I thought I would share some of the improvements I’ve made to Sanctuary. I had a gun factory, but I wasn’t getting much use out of it, so I tore it down and built a sort of middle-American house. I had in mind something that Willy Loman would live in back before the war. 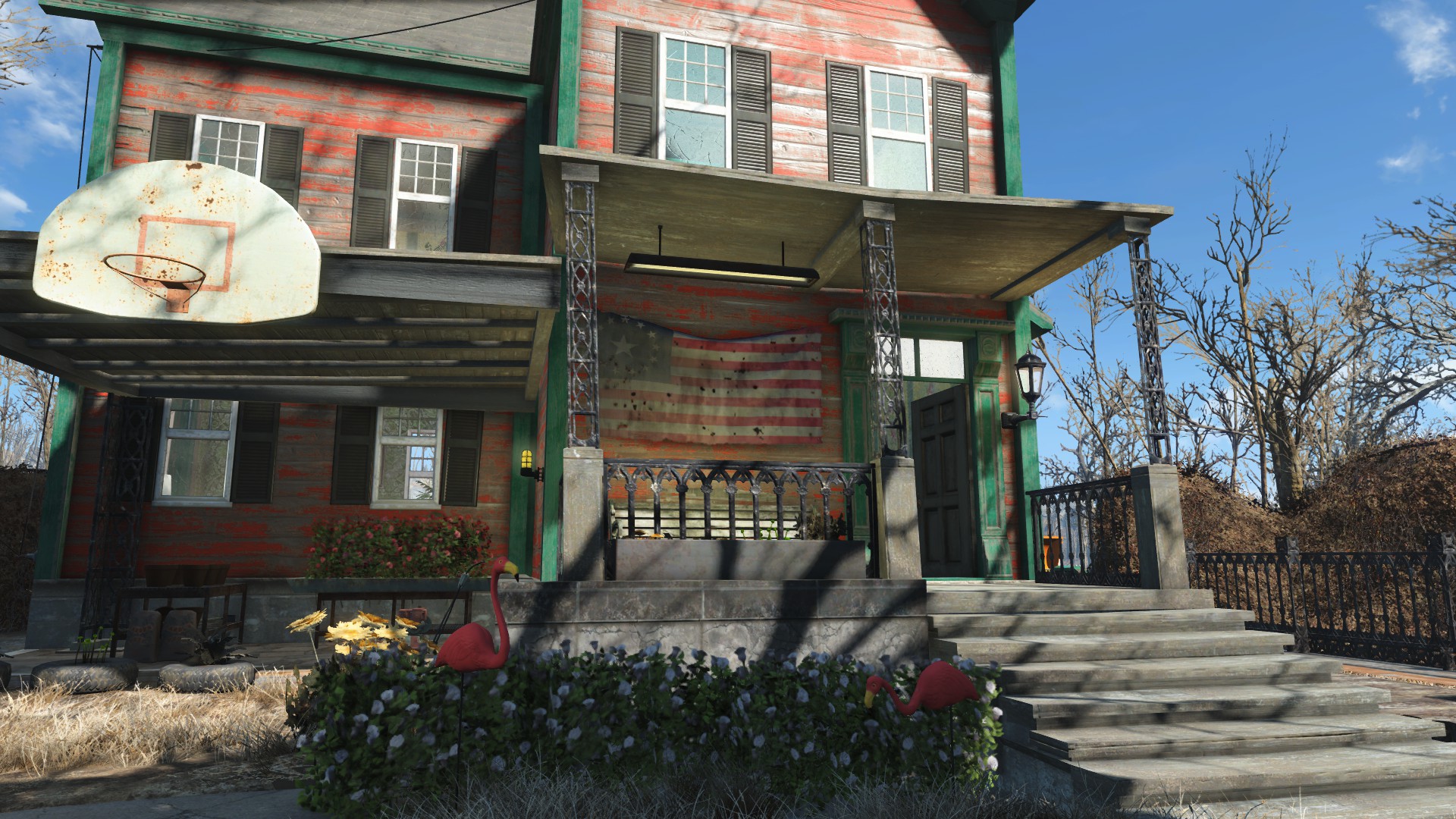 Imagine Willy and Biff shooting baskets amid the flamingos. 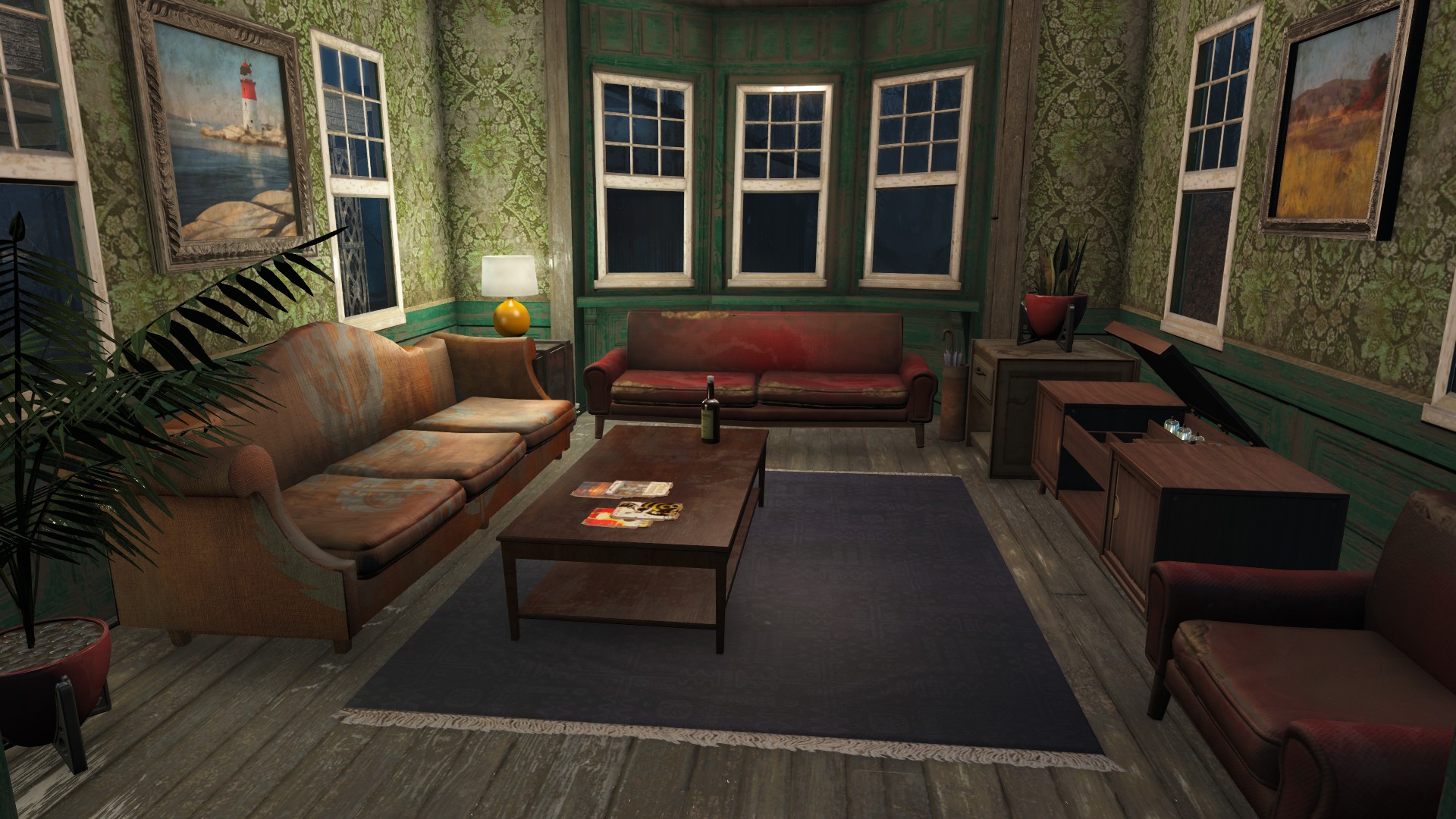 The living room, where the family unit might recreate themselves after a hard day of being wholesome. 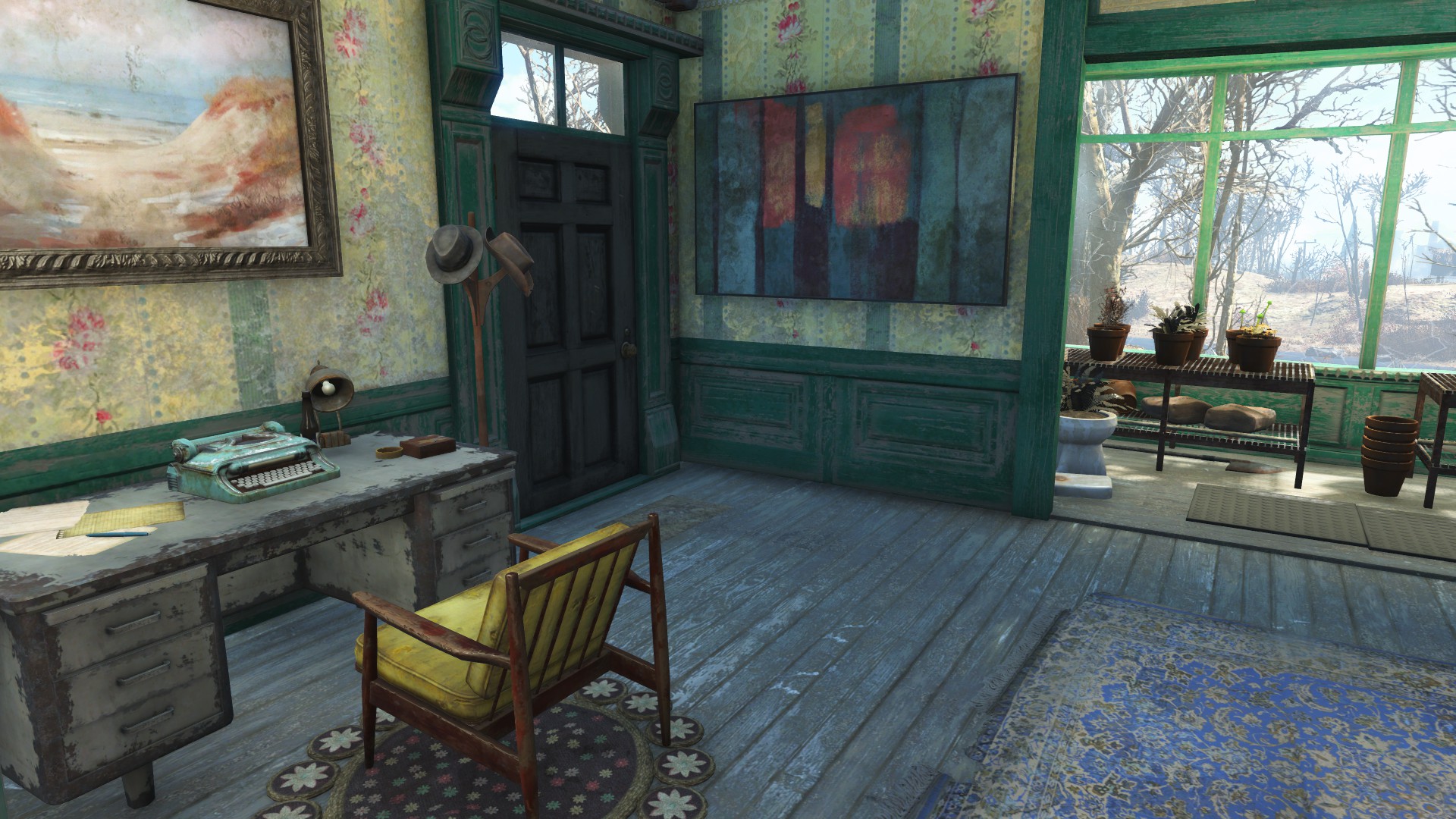 The first floor area and back door, which leads to an unremarkable back yard. 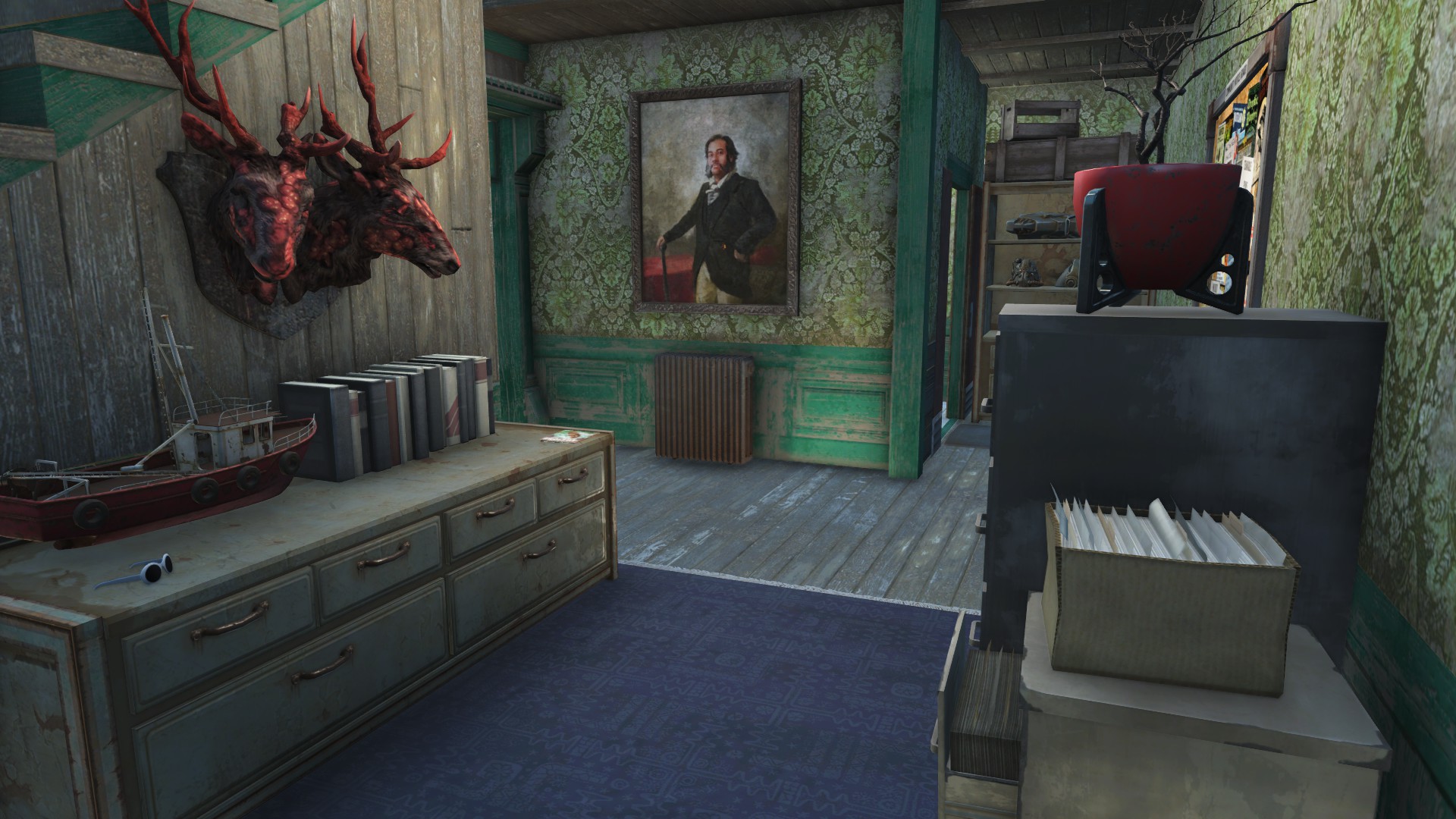 A passage leading off the stairs to the second floor, where the family keeps radiators and files on Un-American Activities. 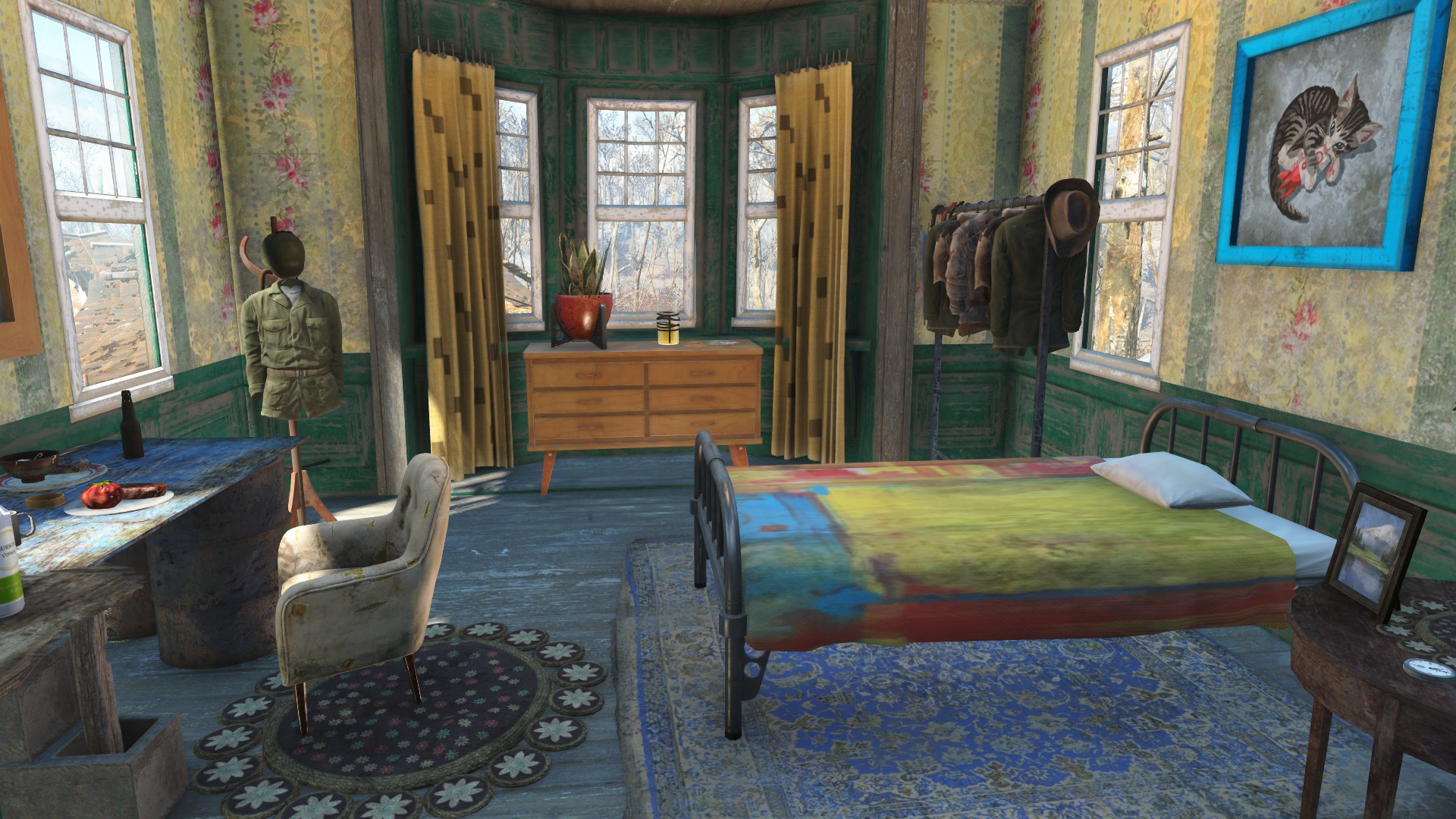 A bedroom, which weakens the Willy Loman vibe a bit, as these are obviously my clothes and hippie bedspread. 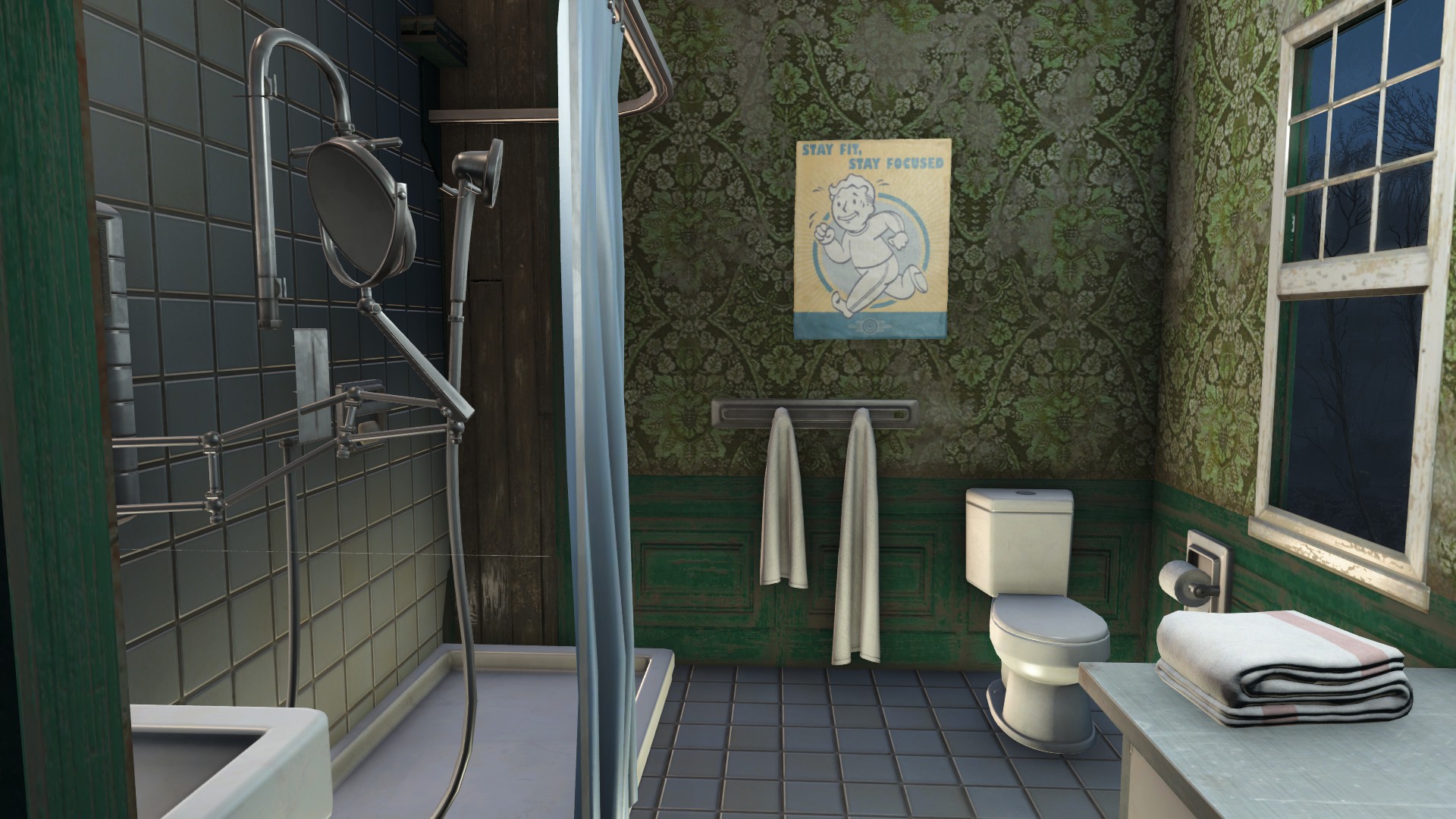 A bathroom, which required a great deal of glitching and schlepping. 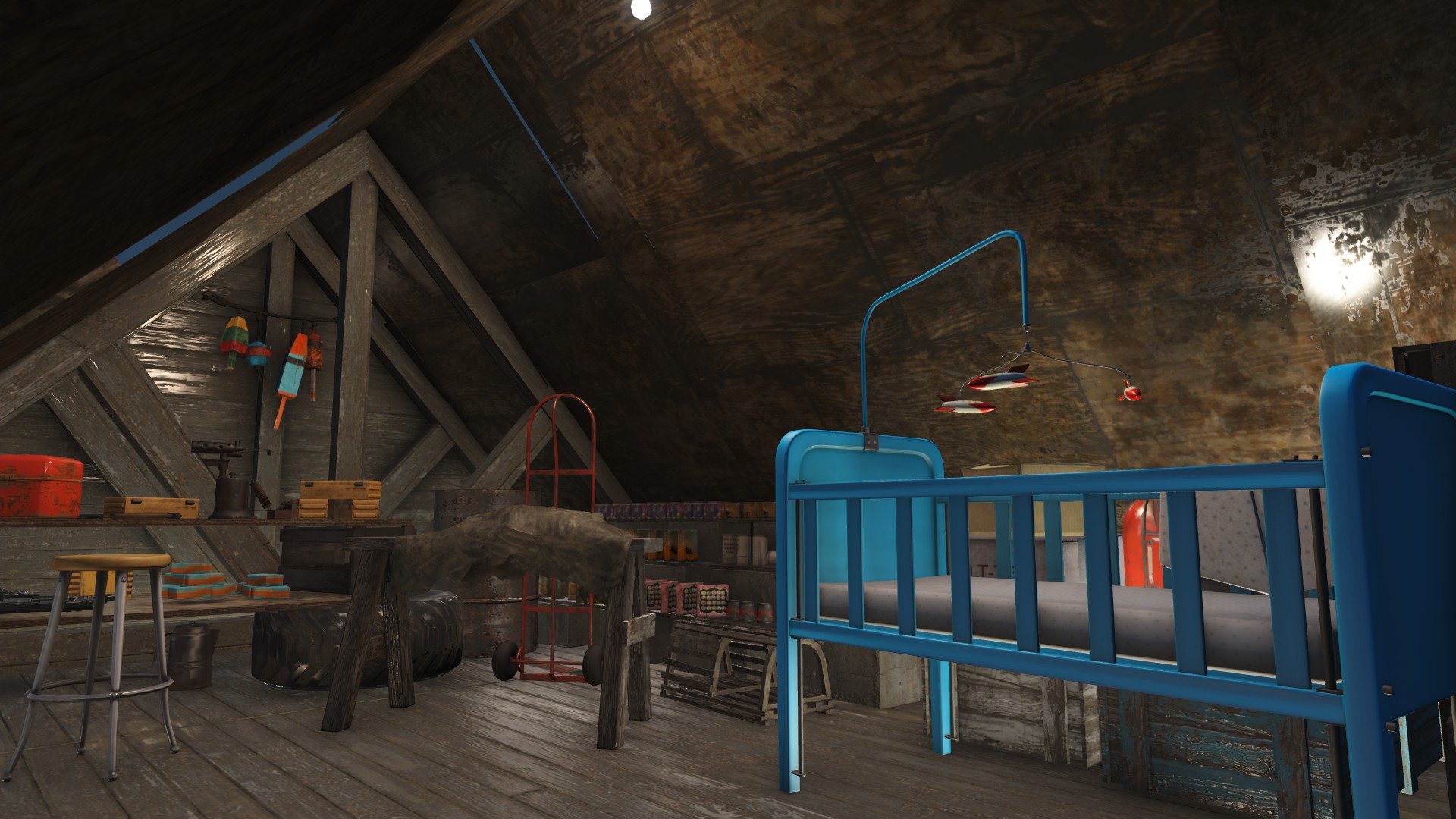 The attic, containing memories and wonders. I was able to sell Shaun in a garage sale, but no one wanted the crib.

Having finished the house, I imagined Willy and the boys constructing a treehouse. The fantasy didn’t work because this is obviously a postwar structure. Nonetheless, it’s bristling with Americanism. 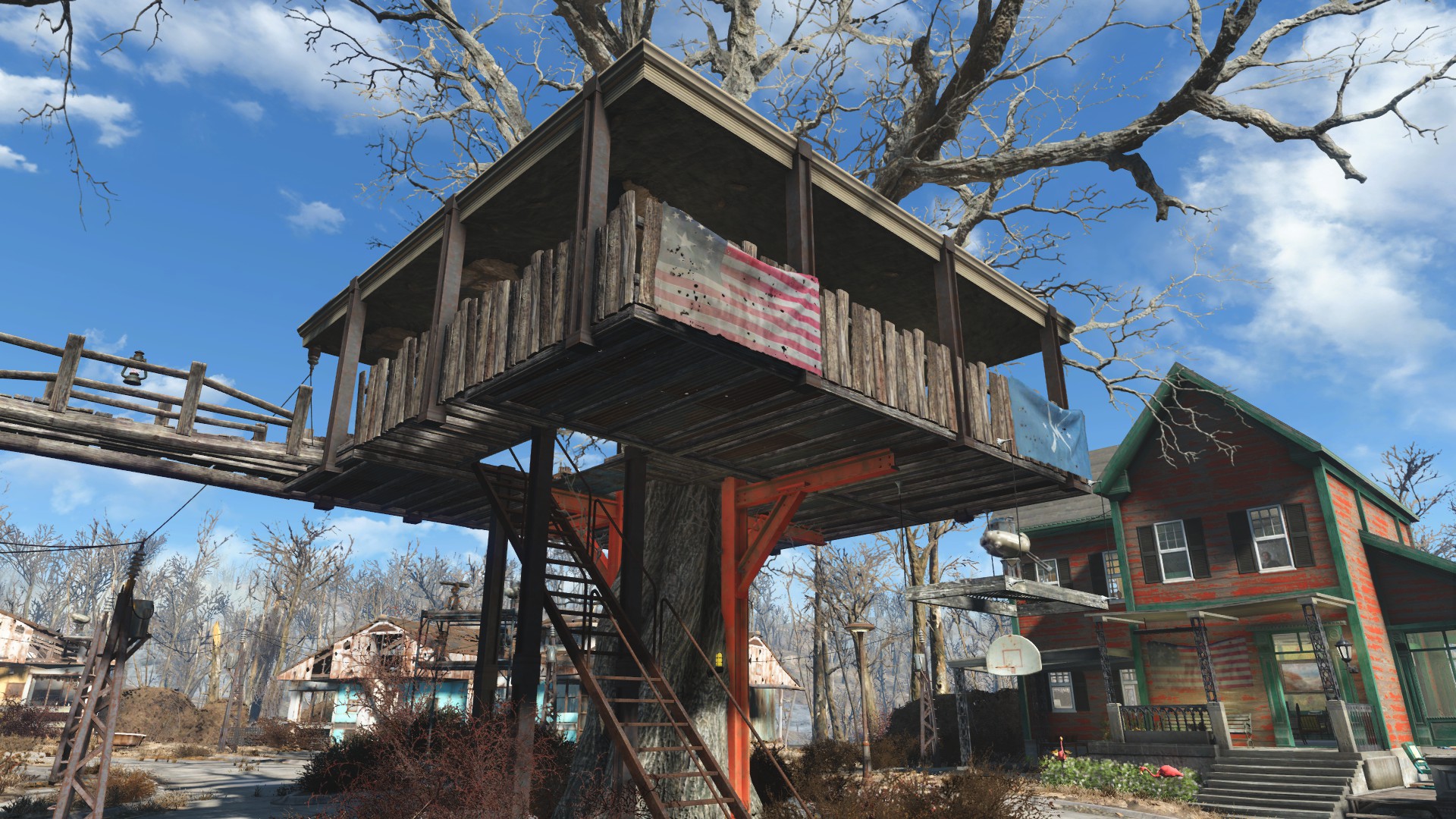 A treehouse, because everybody builds a treehouse in Fallout 4. 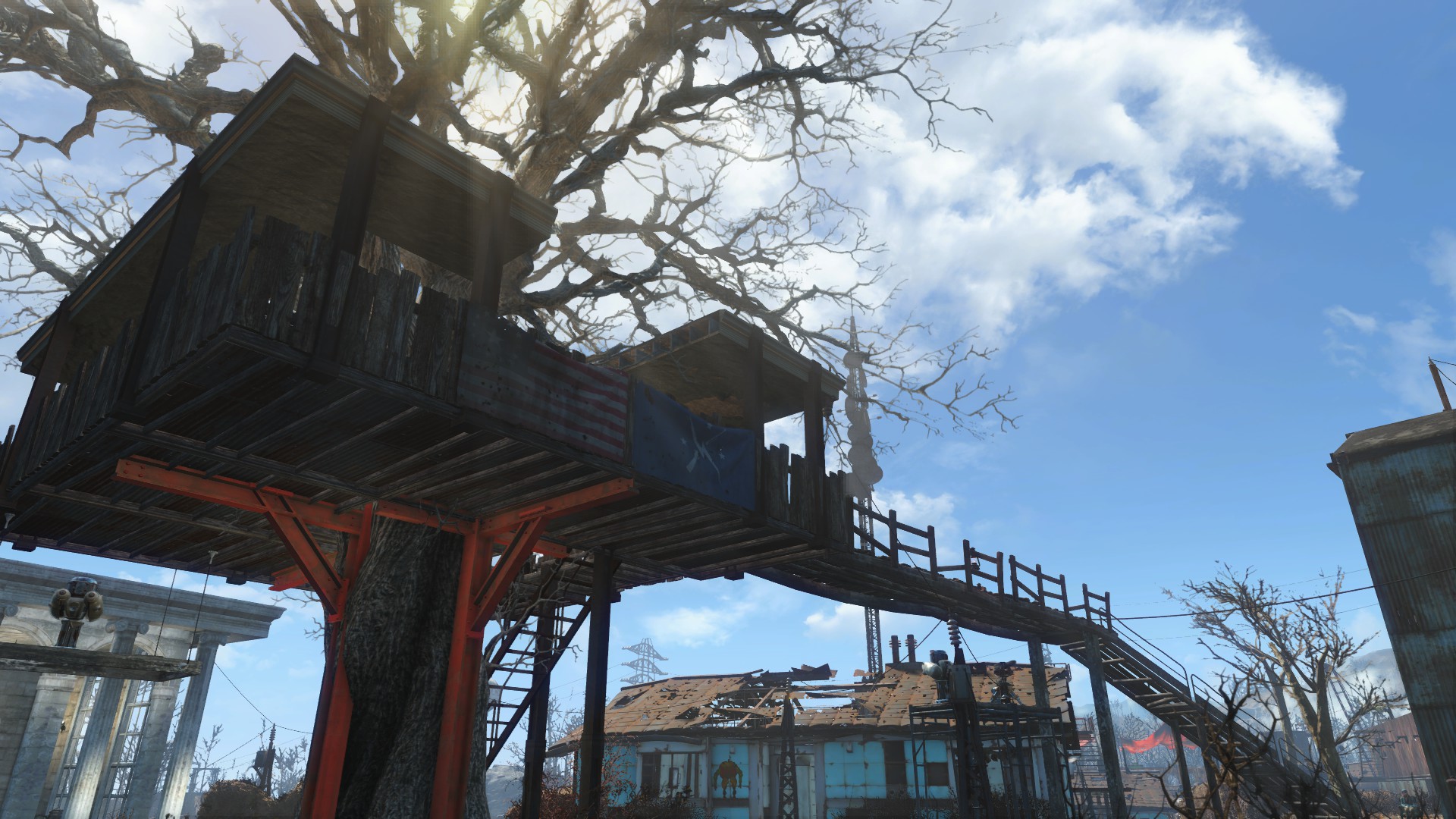 Another shot of the treehouse, because everybody takes at least two screenshots of treehouses. 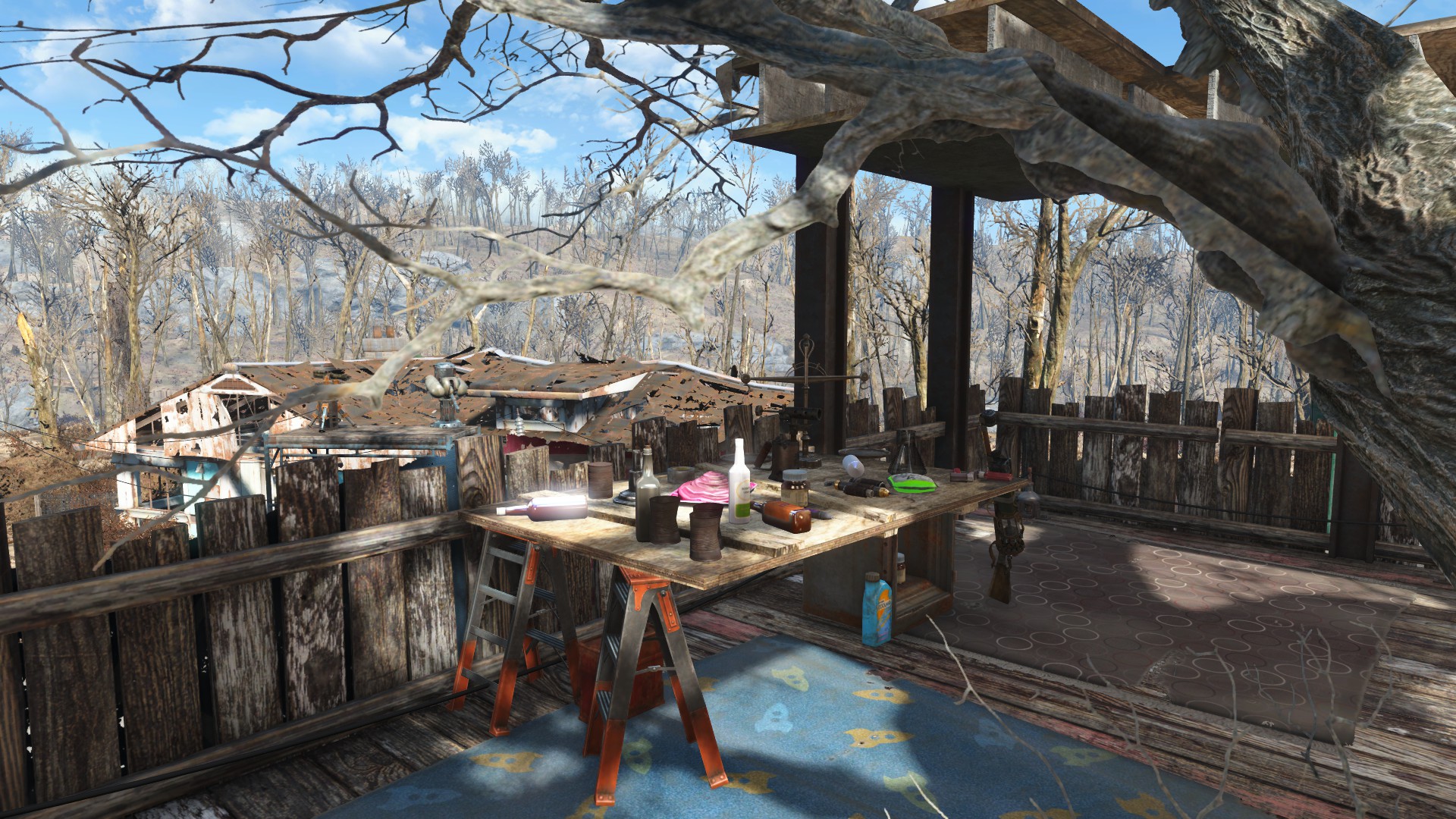 Finally, I noticed that Sanctuary was missing a shrine to me. At the time I made it, I thought the structure captured my dignity in a simple, unassuming way. 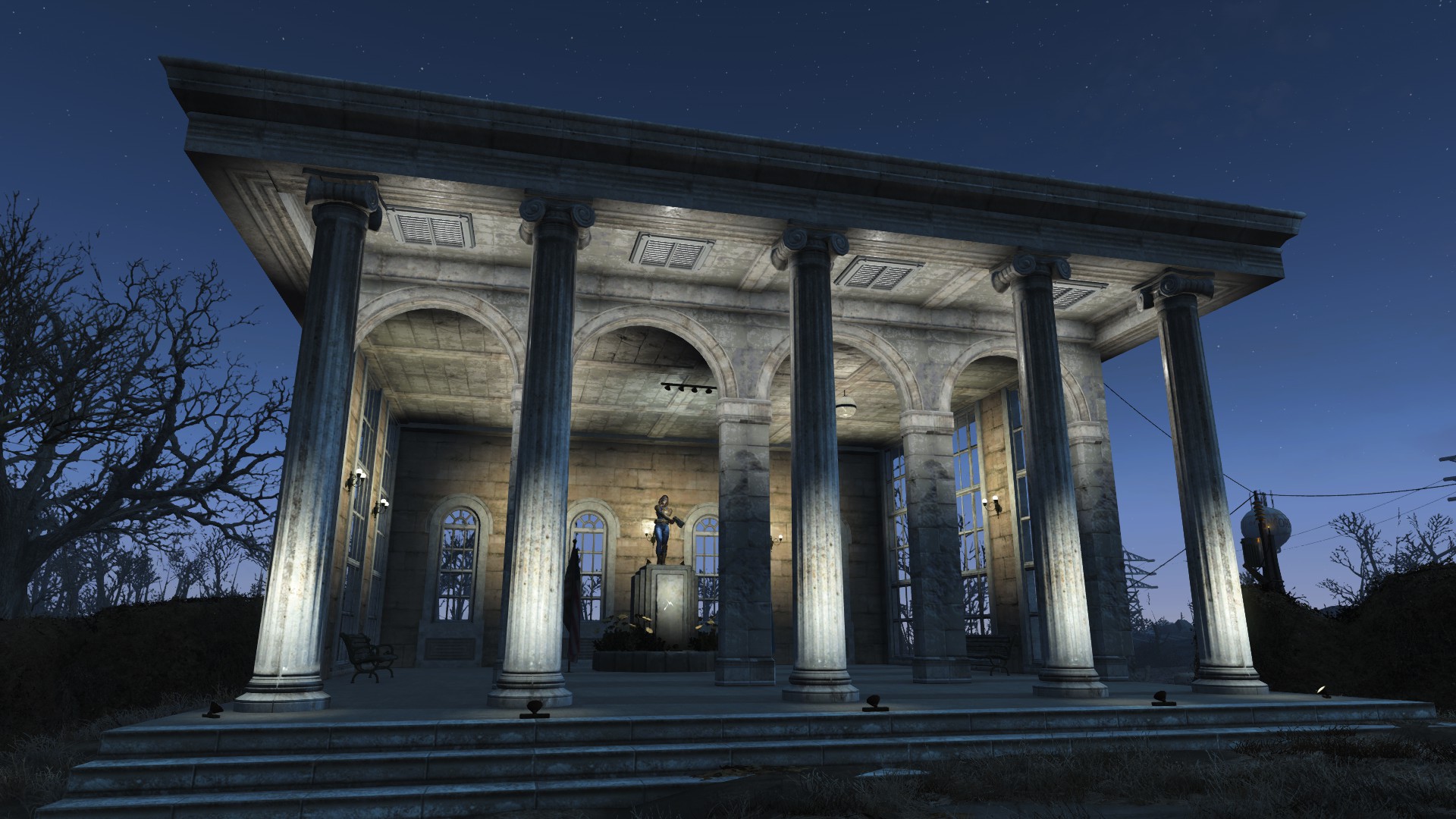 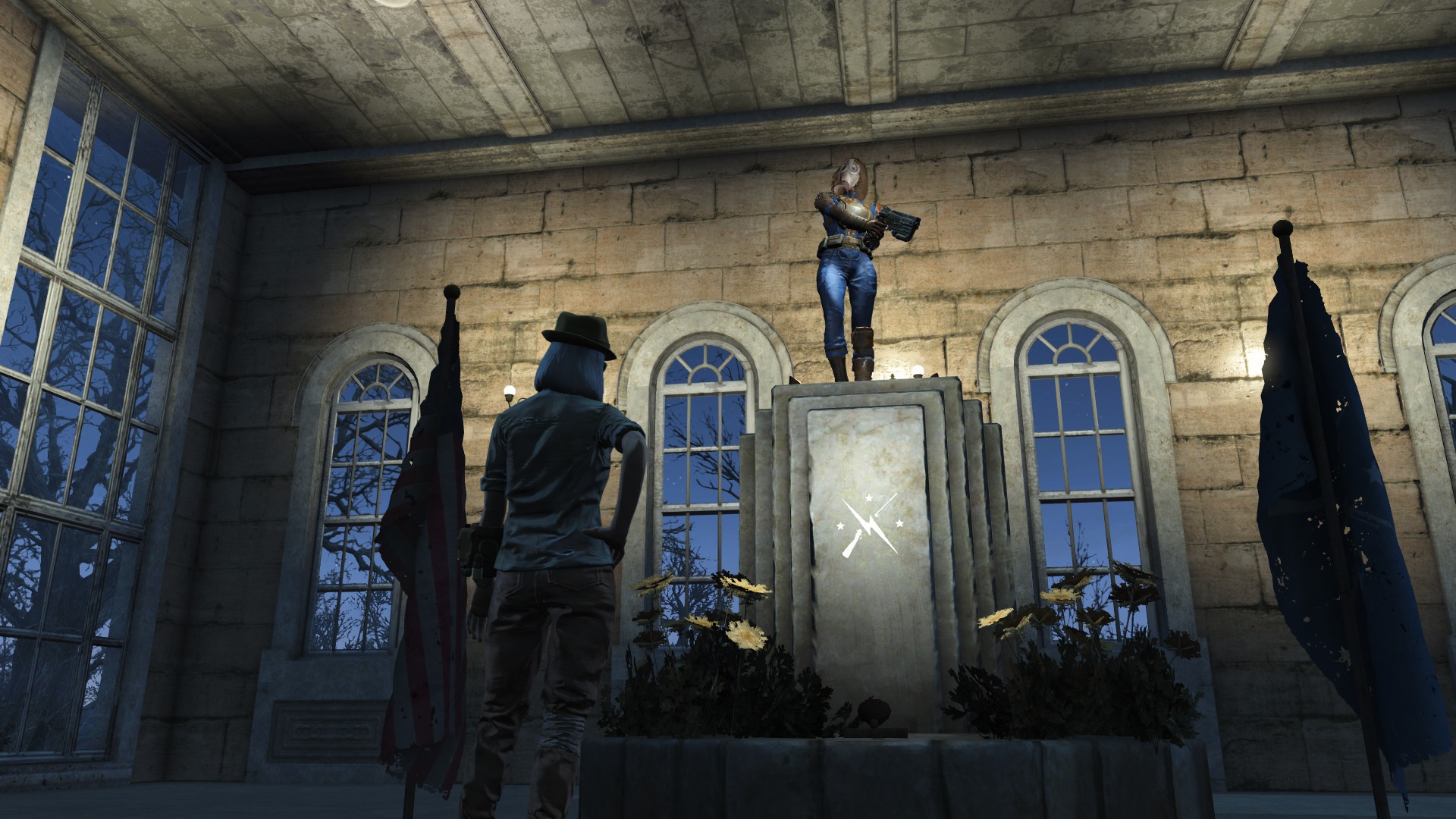 Me, reconsidering the shrine. Is it too much? Do I look fat? (That’s not aliasing — it’s the way the pedestal and flags actually crenelate.)

There you go. I think I’ll go around to other settlements and replace perfectly good buildings with other ones.