As I may have mentioned, I’ve been going around the Commonwealth improving my existing settlements. My priorities have been happiness, safety, and functionality. In most cases, I think I’ve succeeded. The settlers have a minimum of 88-89 happiness, with the average somewhere around 91. That’s pretty good for a population of 21 in every location. Safety-wise, they’re very ably protected. Turrets are strategically arranged around enemy spawn points, and most settlers have high-level weapons like automatic assault rifles. In terms of functionality — well, one does what one can. The pathing is generally good, though in a couple of places the settlers won’t go to bed at night. This is some kind of Bethesda navmeshing thing I just have to live with. It doesn’t seem to affect their happiness score. (Happiness, in case you’re wondering, affects productivity and cash flow . . . somehow. All I know is that I’ve been collecting an average of 17,000 caps at every settlement. Of course, this is after a hiatus of several weeks. If I made weekly collection tours, I would probably be getting about 3,000 per location.)

Anyway, you may recall that I said I had to move my human settlers out of Graygarden to a Conquest outpost down the road. Here is a shot of the outpost, and I only include it because the settlers are insanely happy (score is 97): 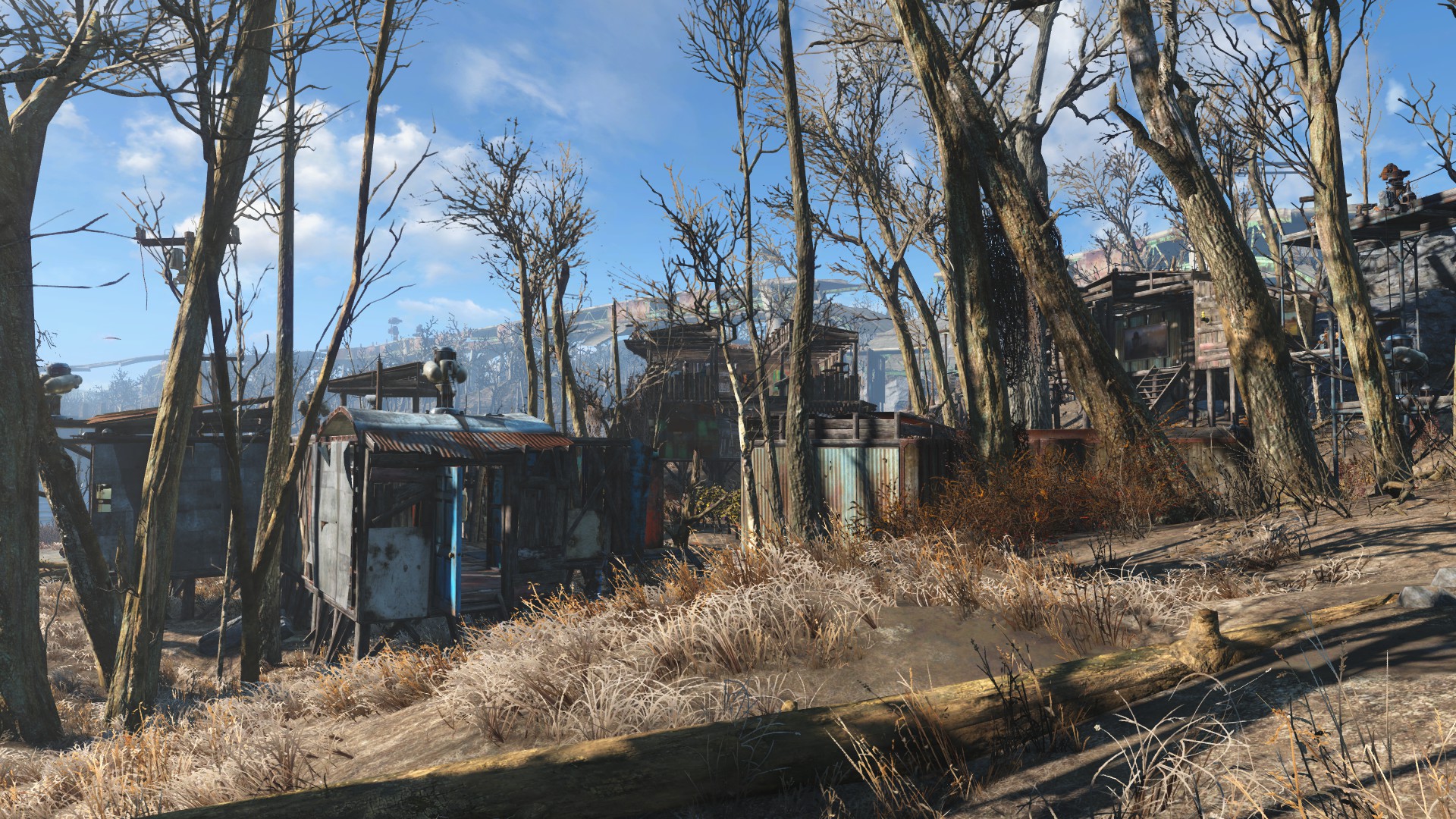 Happy days — probably all the nature and giant bugs.

At Sunshine Tidings Co-op, I made many changes, but the settlers seem to be especially fond of the kitchen: 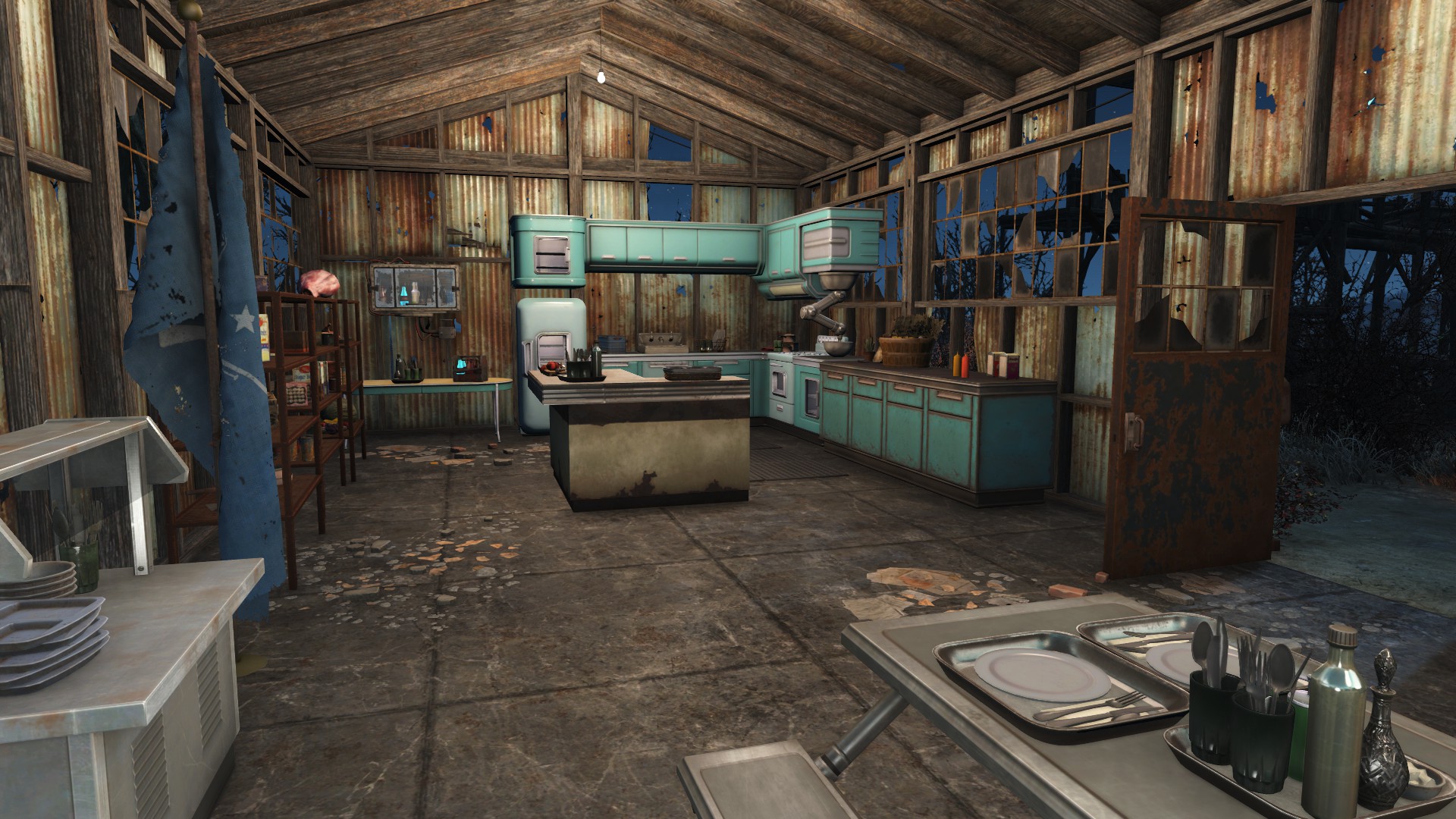 Many happy meals are made here.

At Starlight Drive-In, many doin’s are afoot. I’m most proud of the wading pool/spa I made out of the big irradiated puddle there, but I haven’t been able to get a decent screenshot of it yet. In the meantime, here are a couple of shots of dwellings. One is still being worked on: 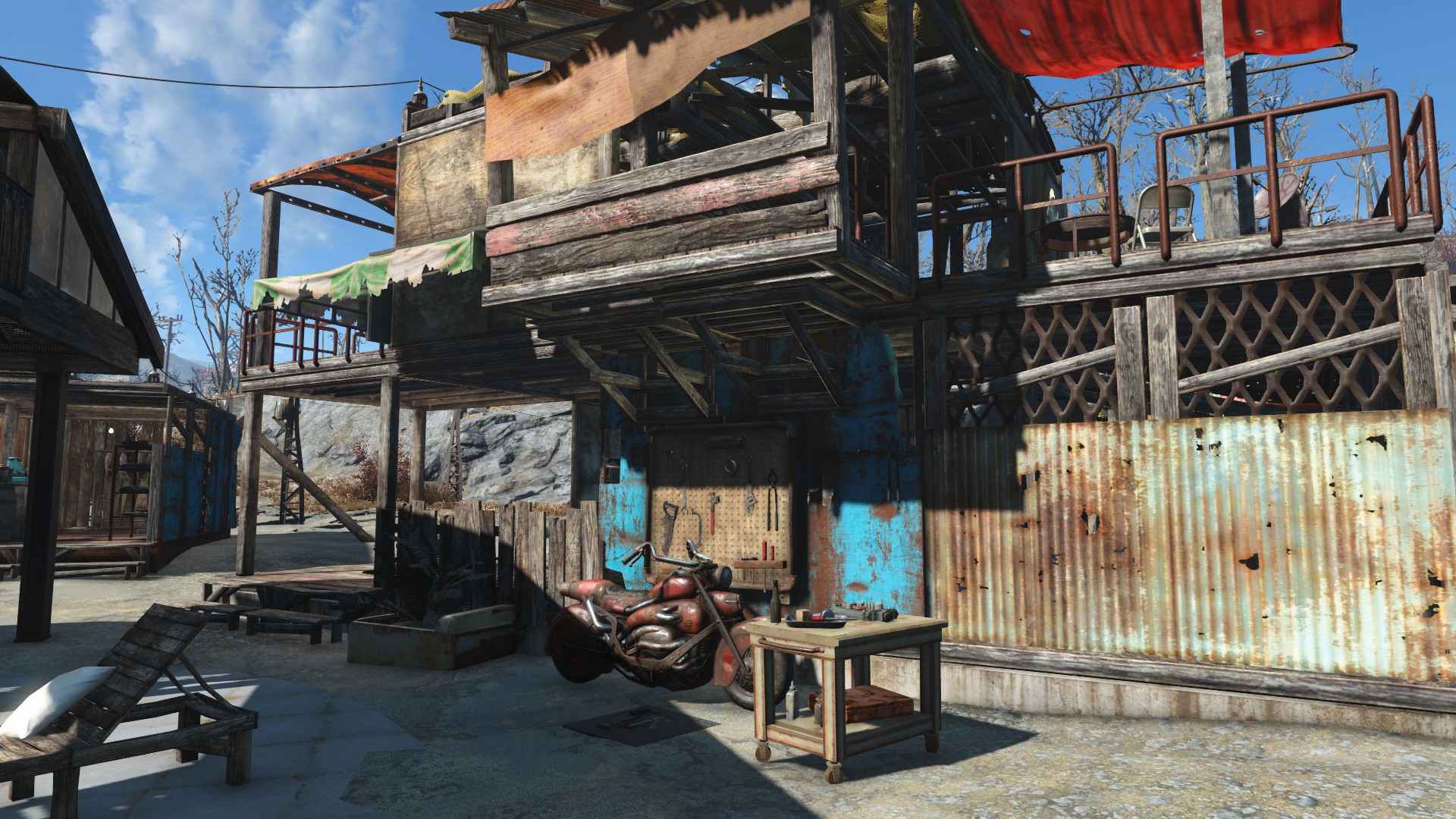 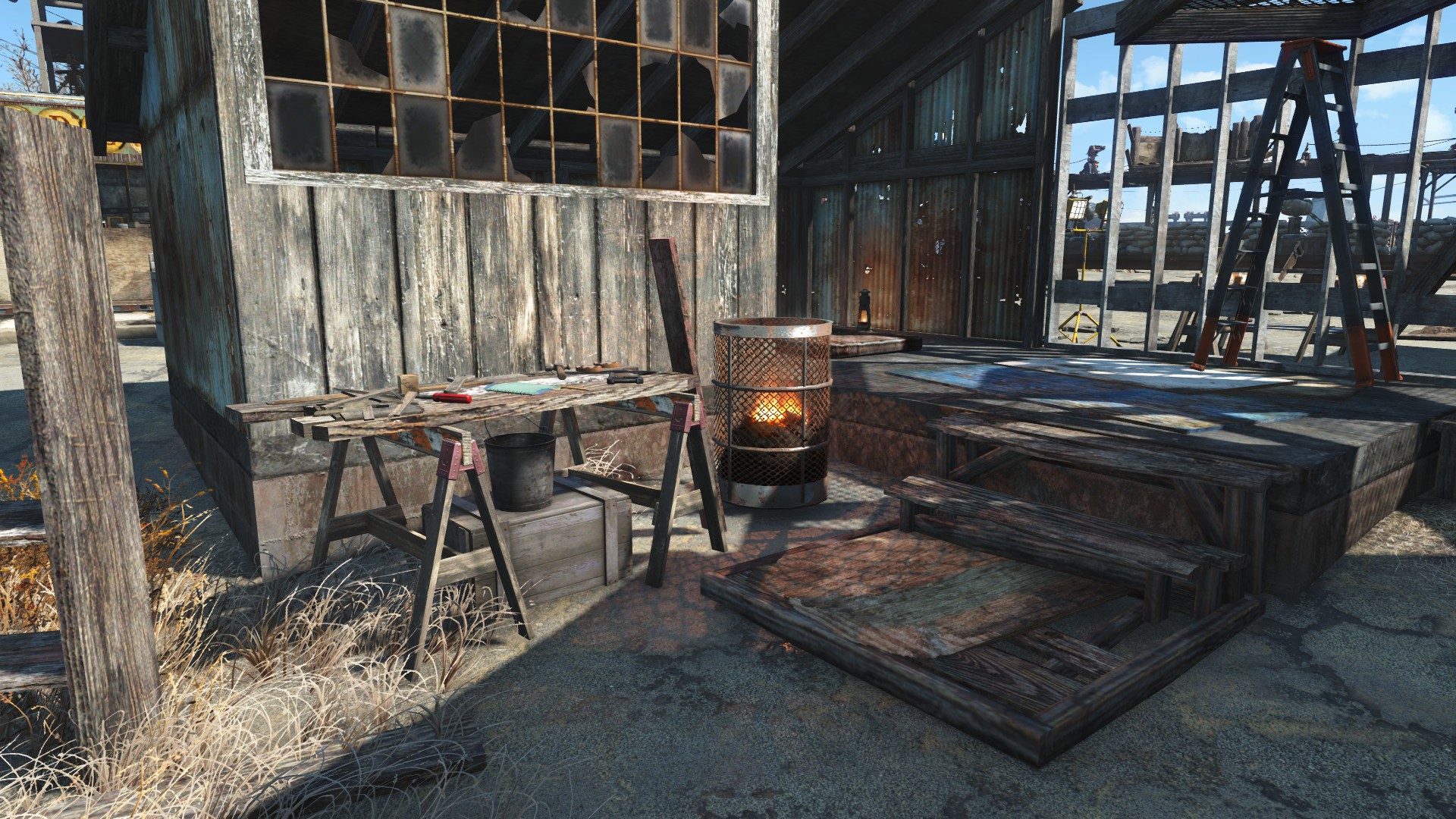 I fulfilled my dream of creating what appears to be a house under repair.

Finally, here is a shot of some cliffside accommodations at Kingsport Lighthouse: 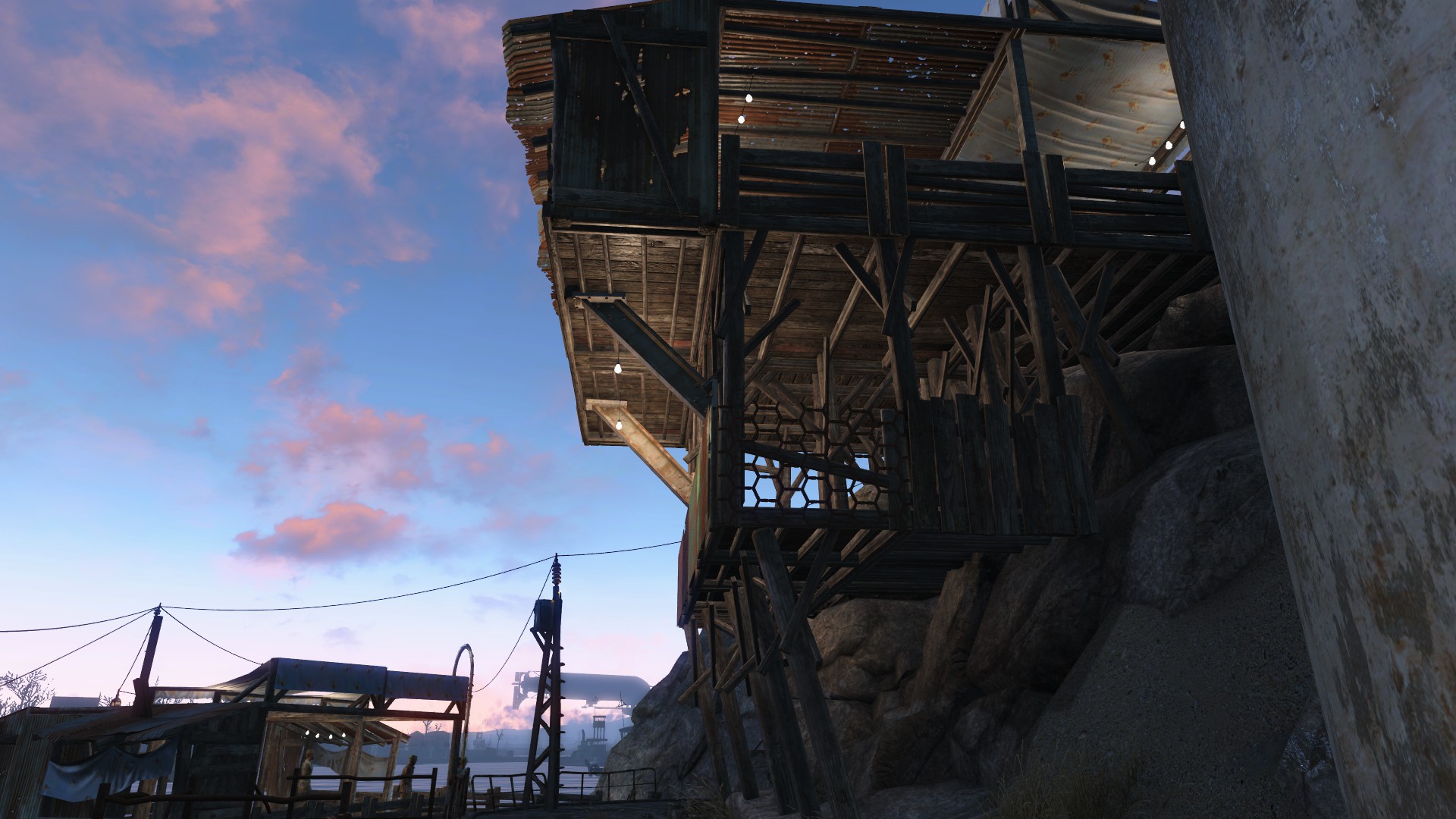 This is one of my favorite places. Located on the Charles River not far from the edge of the Glowing Sea, it’s easy to miss unless you stumble across it. The settlement has docks, shop buildings, warehouse structures, and other wonderful accoutrements. Plus, it’s extremely challenging to repair and populate correctly. I like it a lot.

I decided to make an inn (on the left) near the existing shopping area. A garden adjoins the inn on the other side, but you can’t see it very well.

I only have the one shot here because my other contributions are taking long enough to load. (Simulcast on BF.) 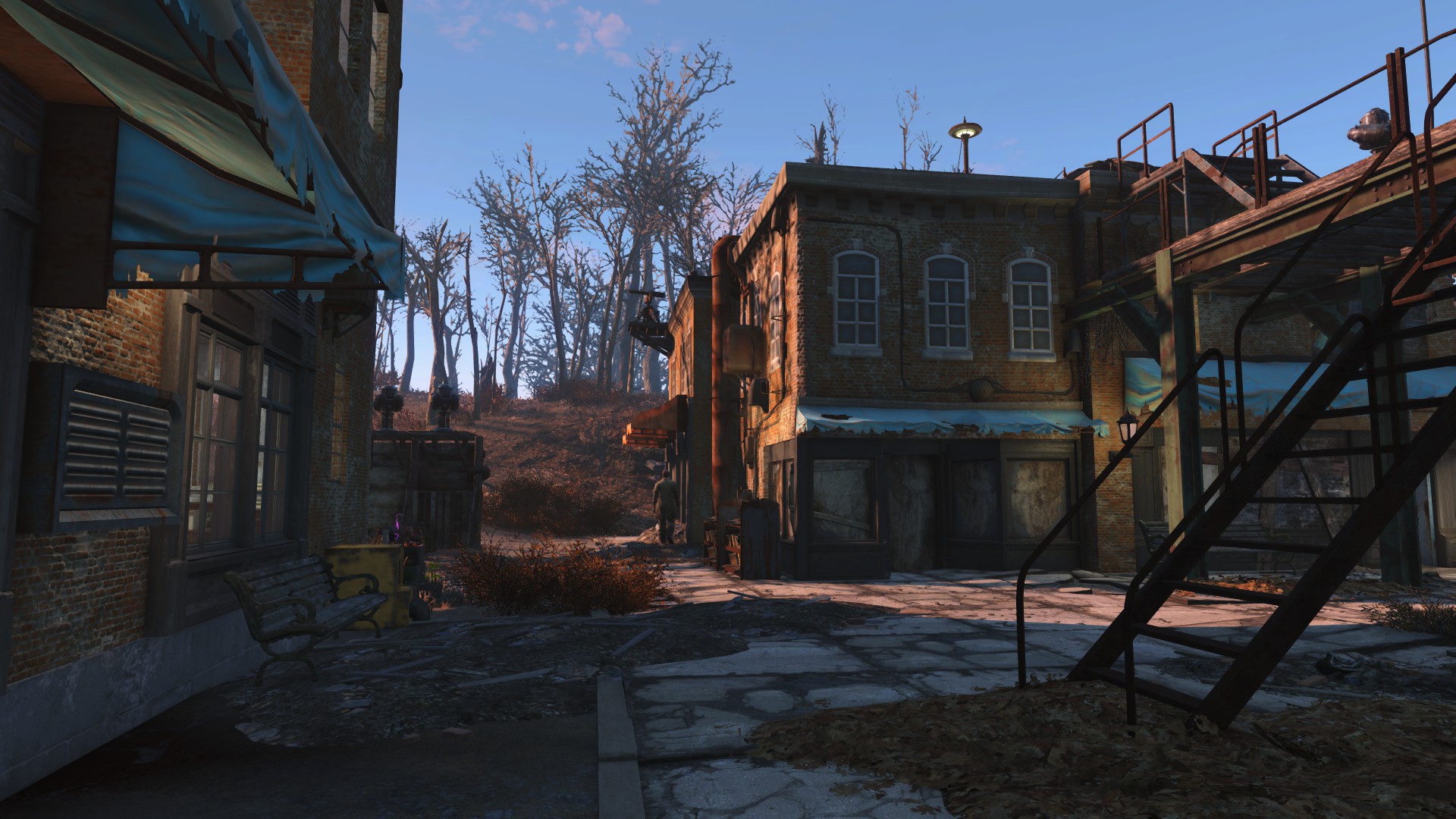 I tried to get the inn design as close as possible to the existing architecture. Sadly, the mod I was using couldn’t duplicate certain trim combinations and other things.