In the absence of anything interesting to play, I’ve been mucking away on my Fallout 4 settlements. It’s gotten difficult to find appropriate acreage for Conquest sites. I did finally find a nice spot, but in the meantime I’ve been occupying myself with improvements to a couple of Preston-authorized places, namely Bunker Hill and Abernathy Farm.

This is a notoriously difficult place to work on. As a center for caravan trade and a sort of covert node for the Railroad, it’s already pretty well developed. Most people give up when they see all the in-game structures, including an indoor market and cunning little sleep alcoves along the fence line. There doesn’t seem to be much you can add. But I was not deterred. 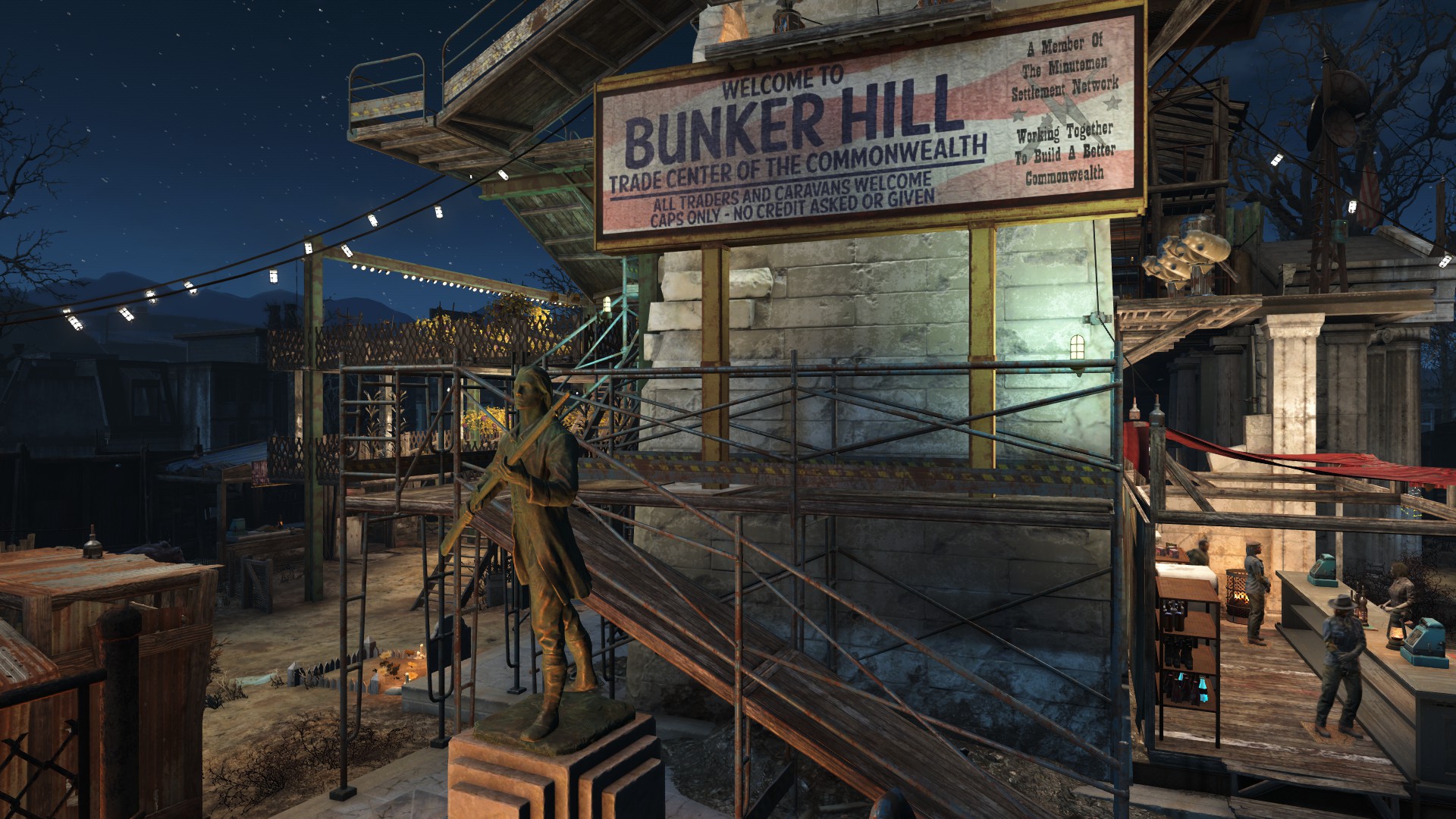 I made quite a few additions to the main entrance. The scaffolding around the monolith was quite challenging to augment, but I managed. 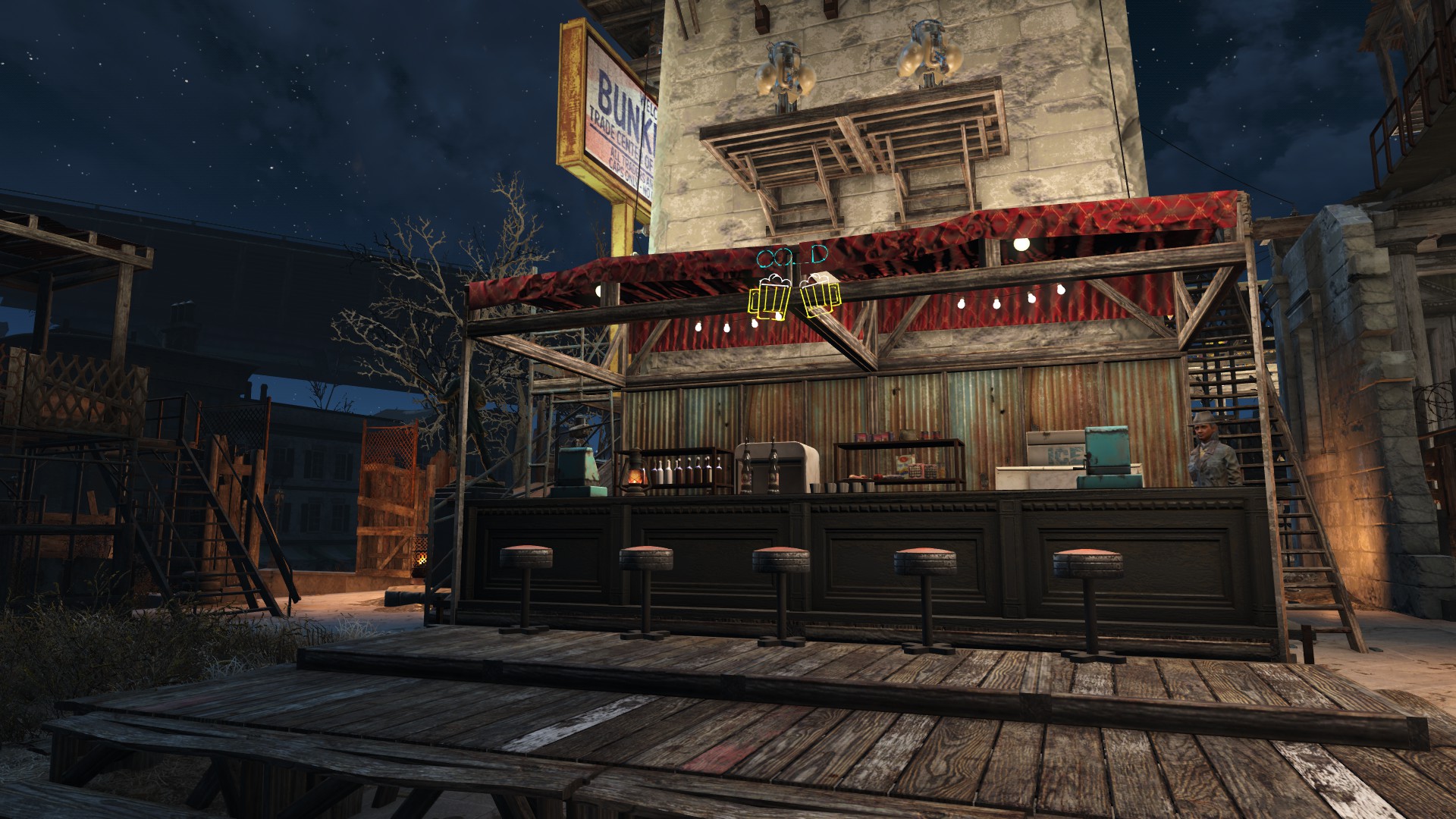 Settlers love two things above all else — bars and places to sit. This establishment has both. It also has two bartenders. 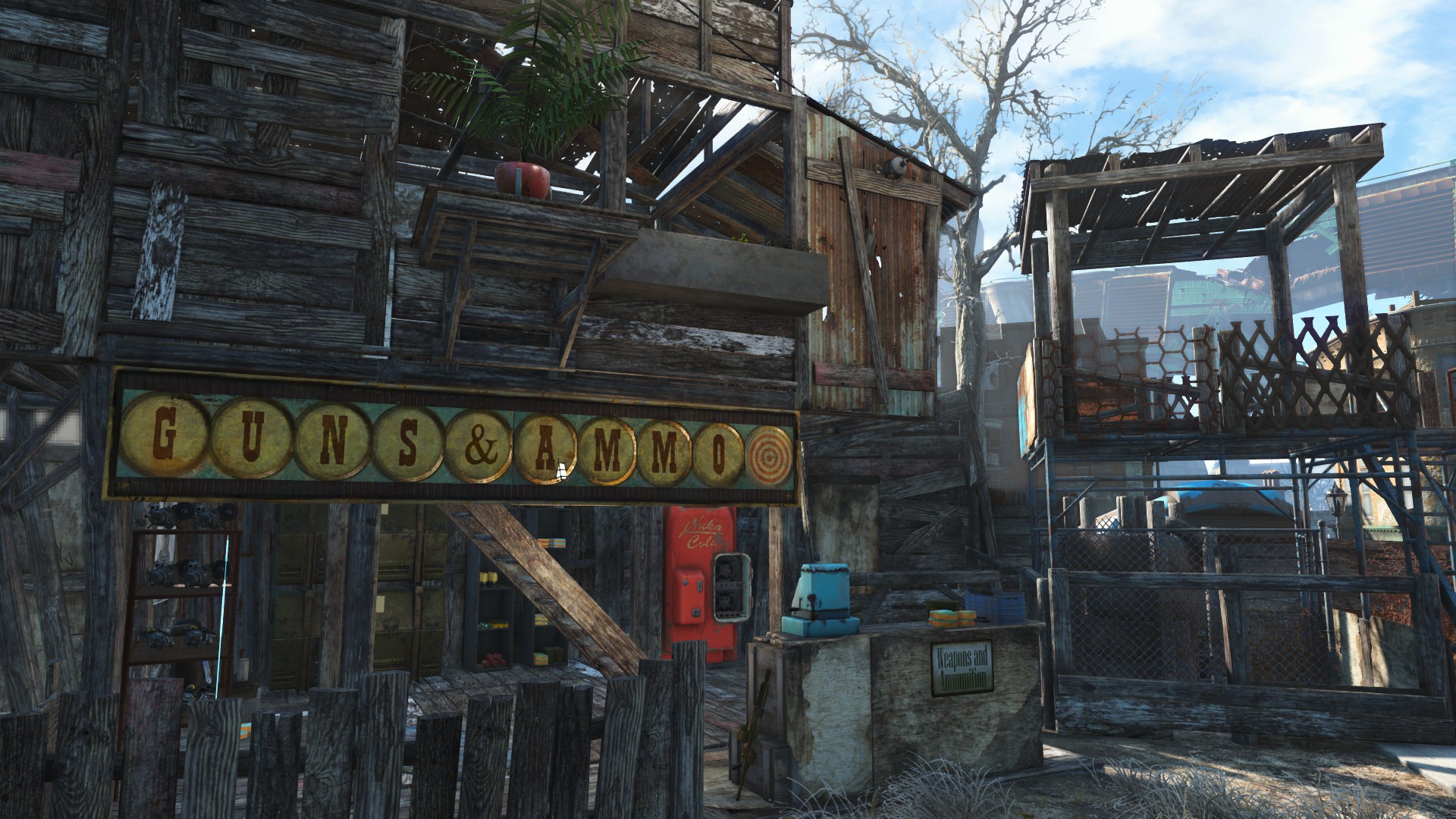 A gun shop and guard post. The shop occupies a pre-made building which was being underused. The upstairs functions as an apartment. 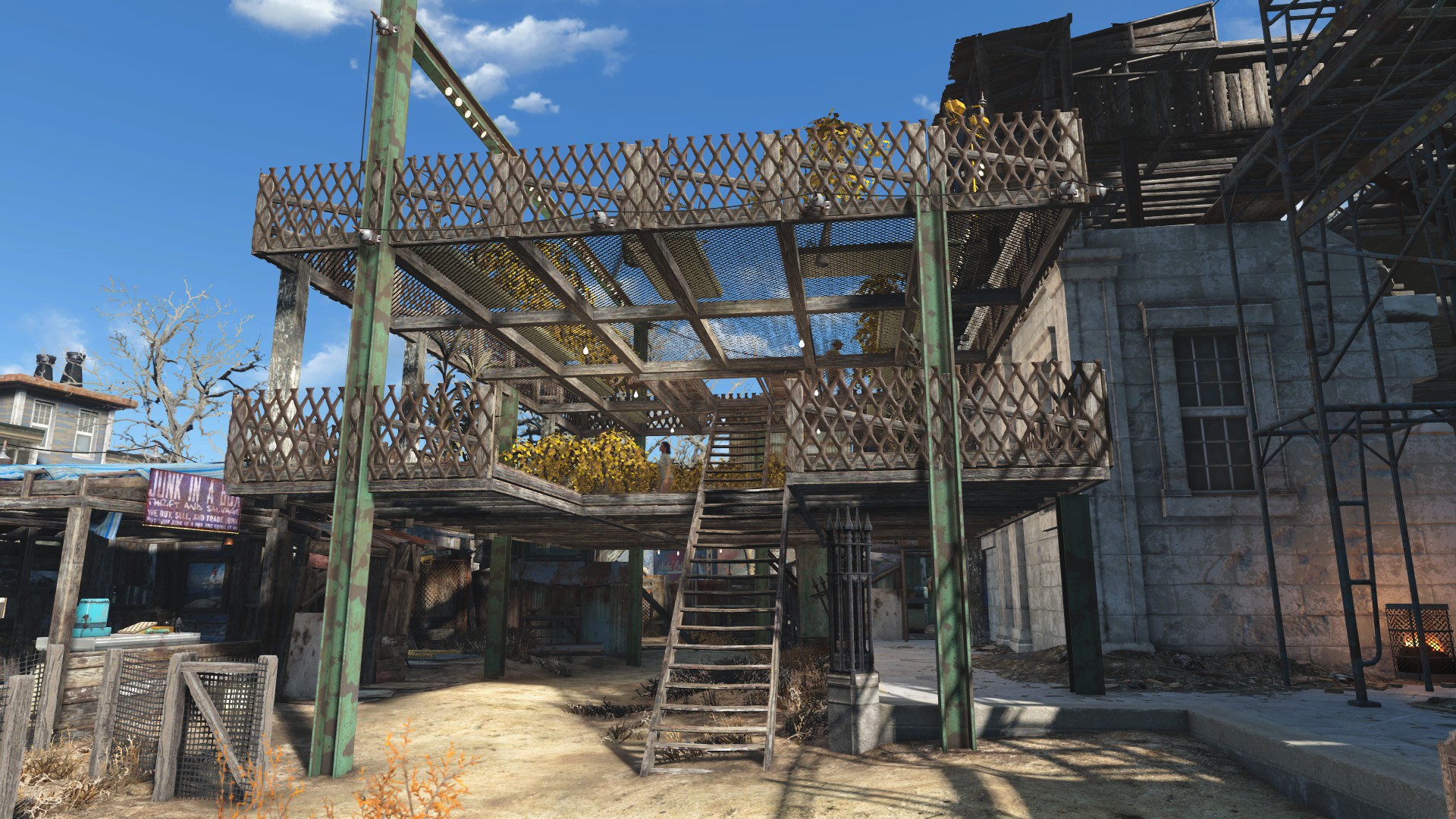 As there is no room at all for a proper farm, you have to resort to elevation. The farmers seem to like it. 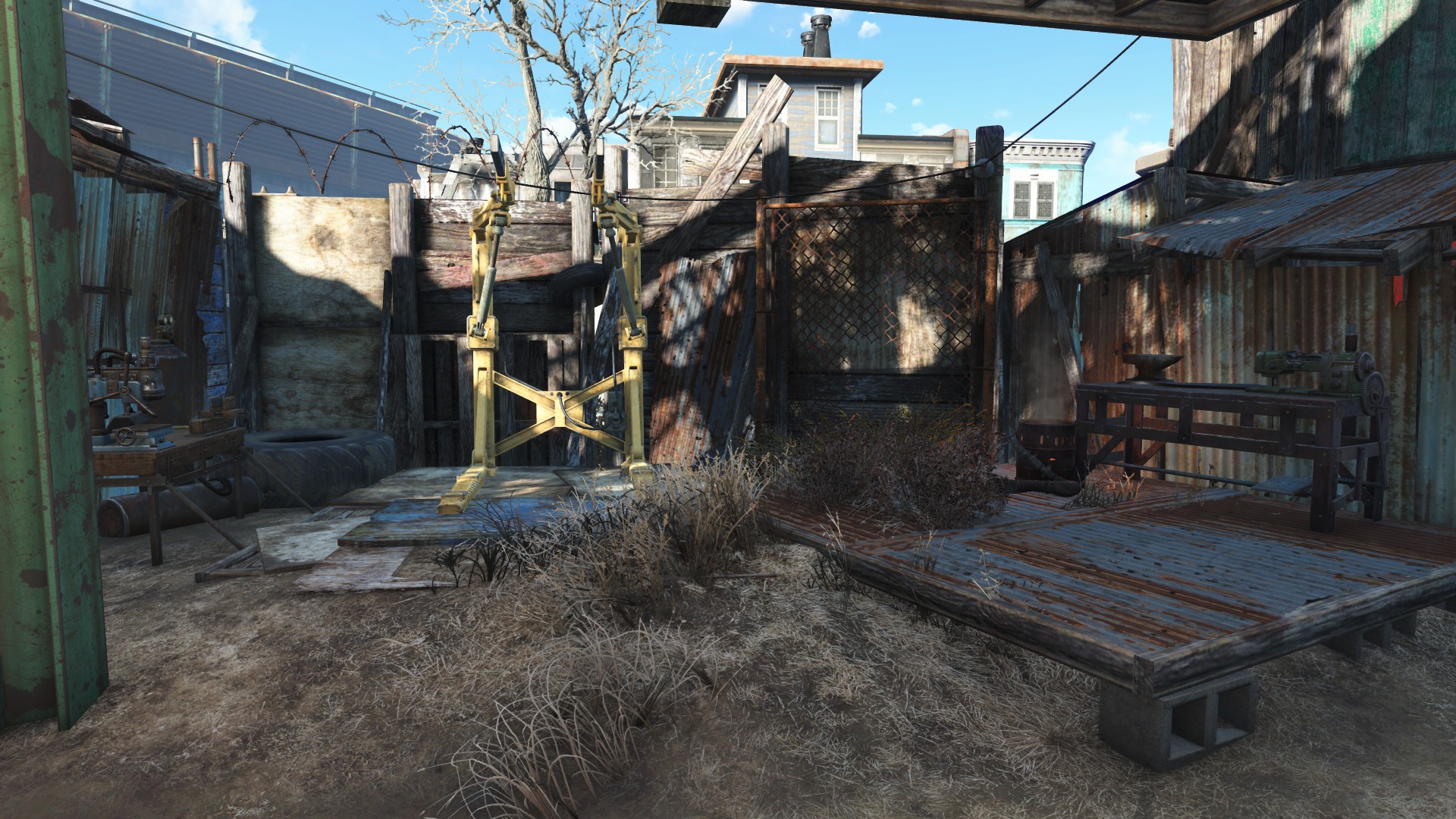 It seemed reasonable to fill this empty space with crafting stations. I had fun embedding plywood into the ground and finding a new way to use shack roofs. 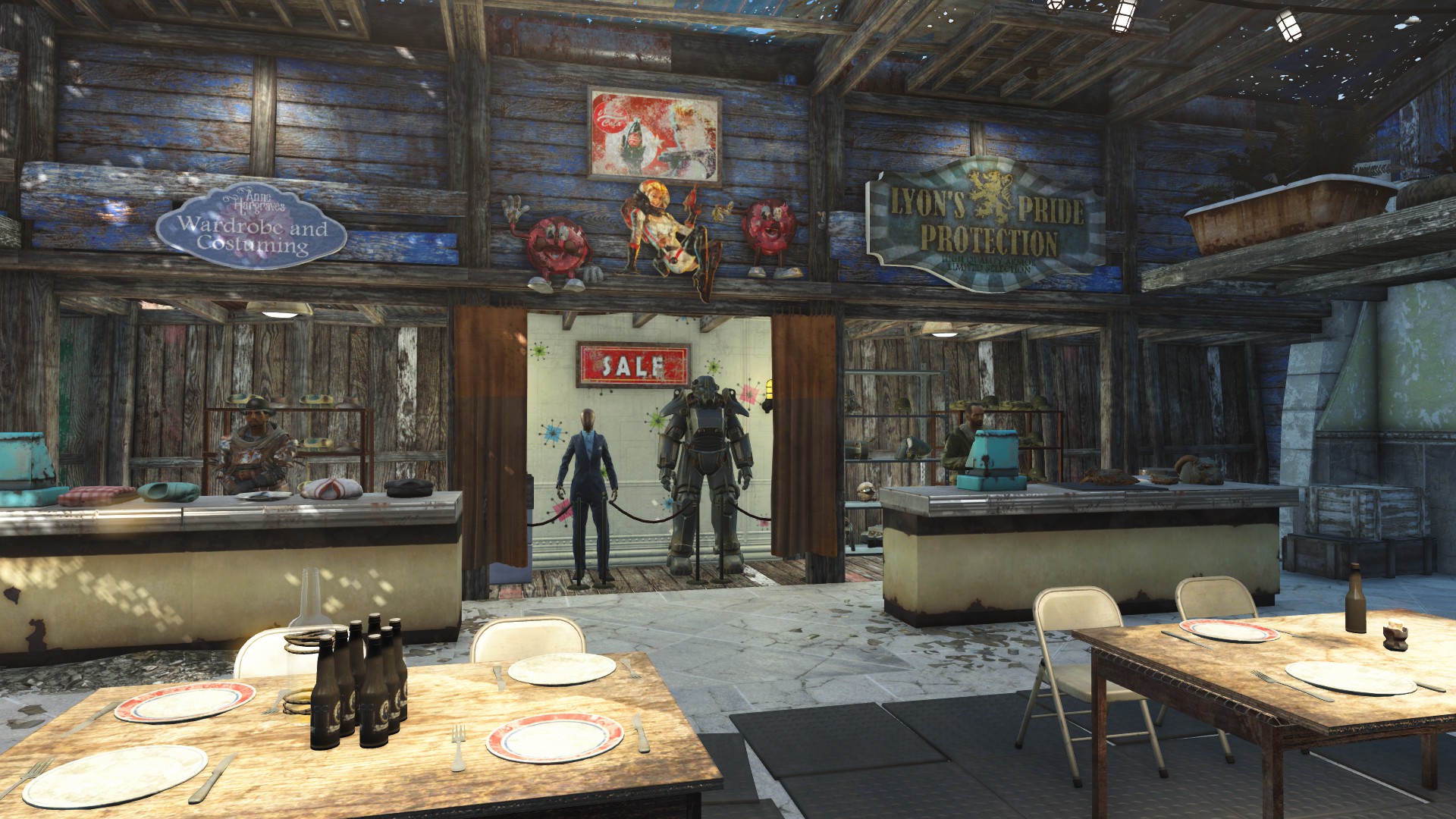 I spiffed up the inside market with an armor and clothing shop. I cleared the two tables in the foreground and used plywood for eating surfaces. I’m pleased with how the Nuka Cola marketing schlock turned out. (Apologies for the smudgy graphics. This looks much better in-game. I think Steam does something to degrade screenshots.) 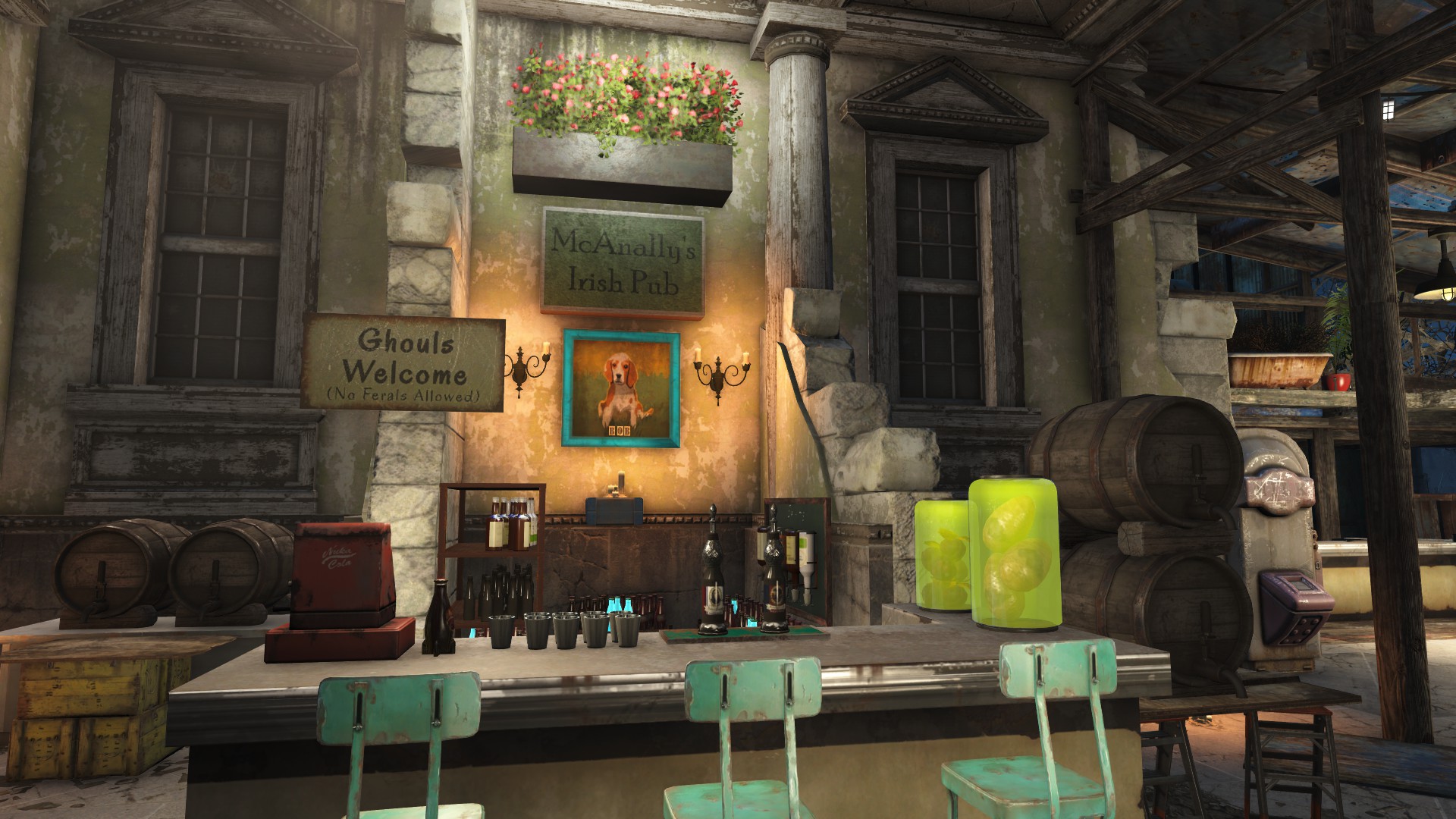 This bar is a few feet away from the clothing and armor shops. As I said, settlers love bars and seating. This establishment pays tribute to Bob the dog, who is no longer with us. 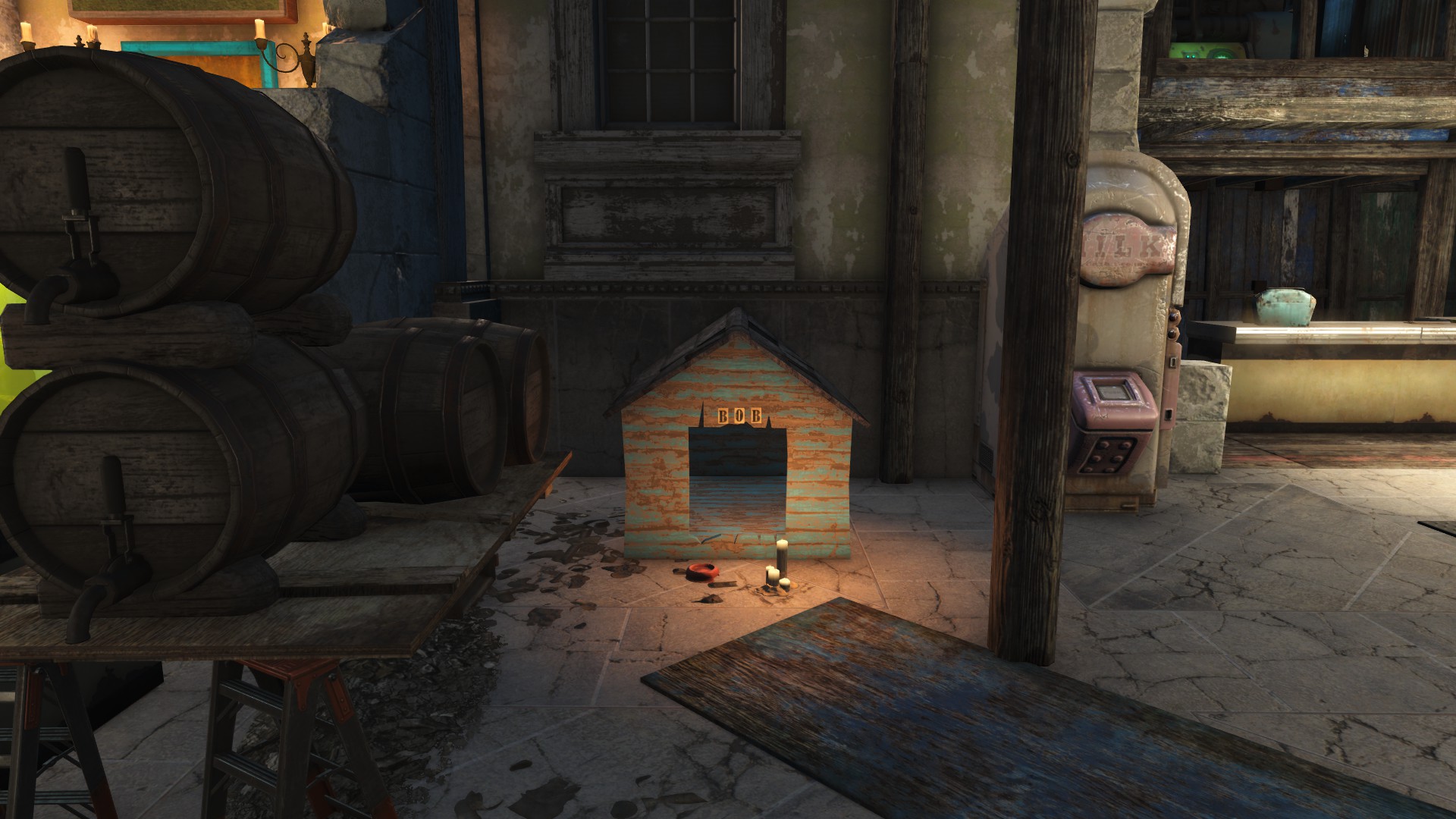 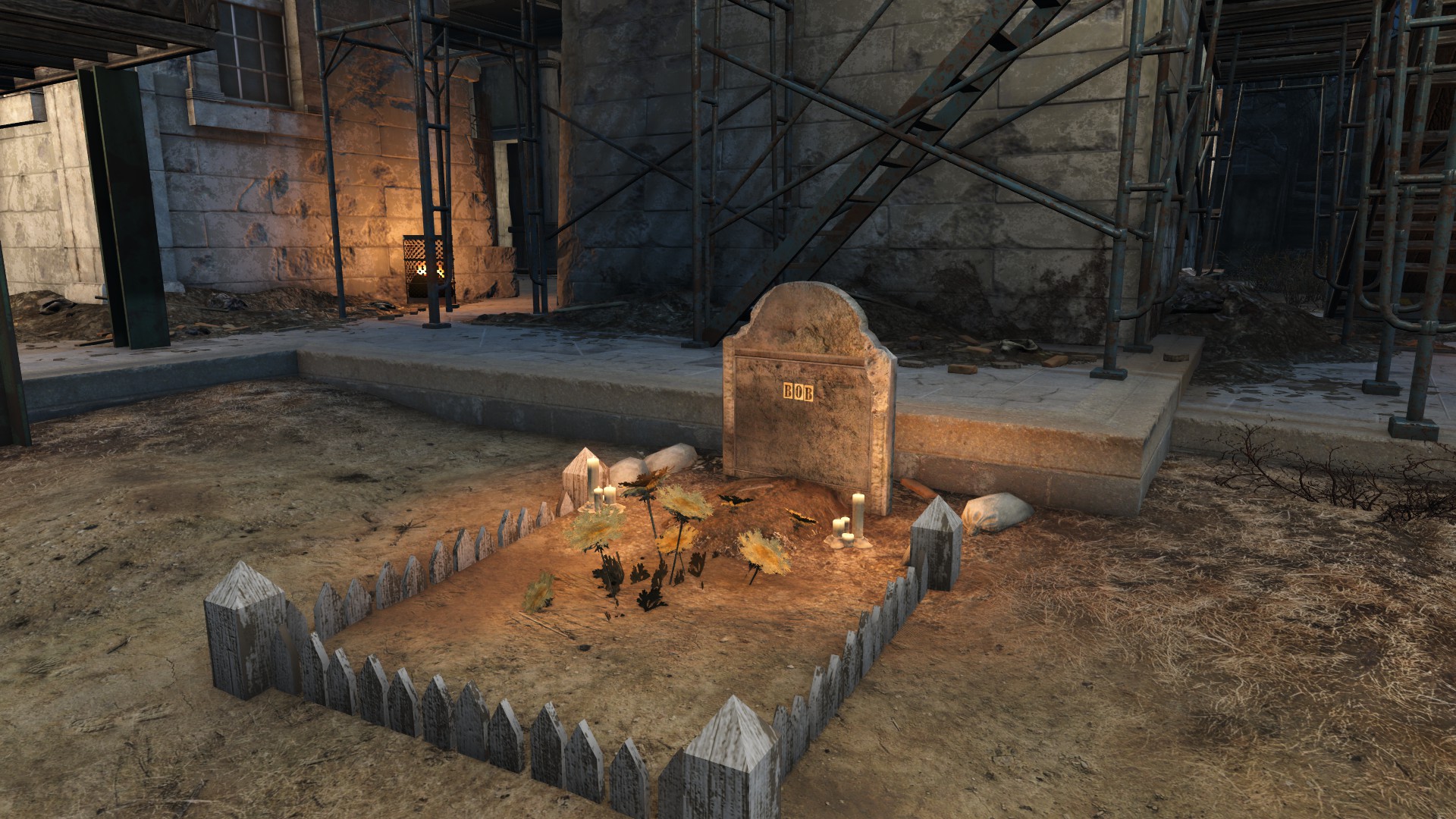 Bob is interred with reverence at the foot of the monolith.

This is one of the first places Fallout 4 players attempt to settle. It’s universally liked for its plentiful room and unusual build height. Since the area around the farmhouse was already occupied with crops, I added some new living quarters to the lower half of the property. 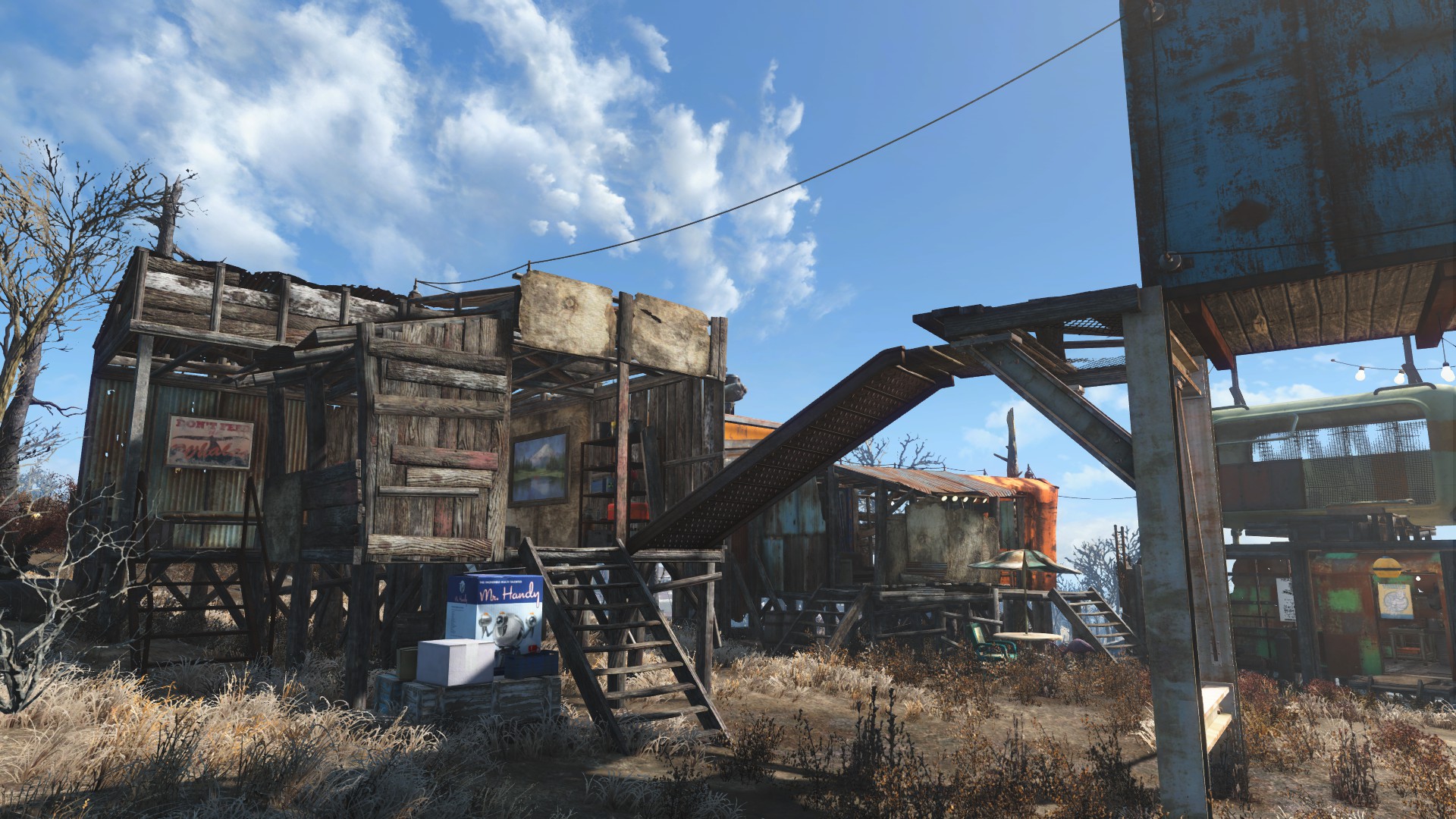 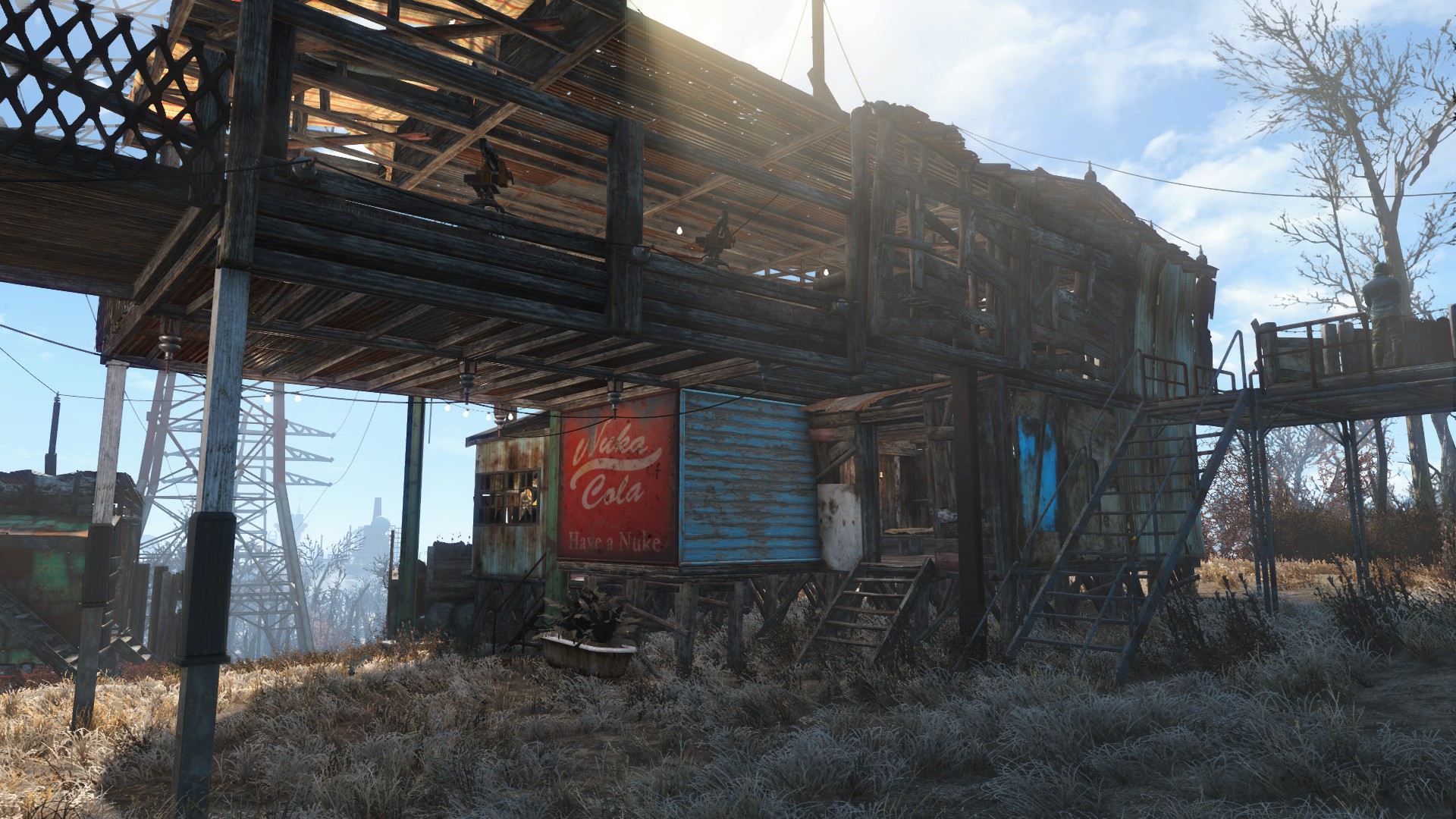 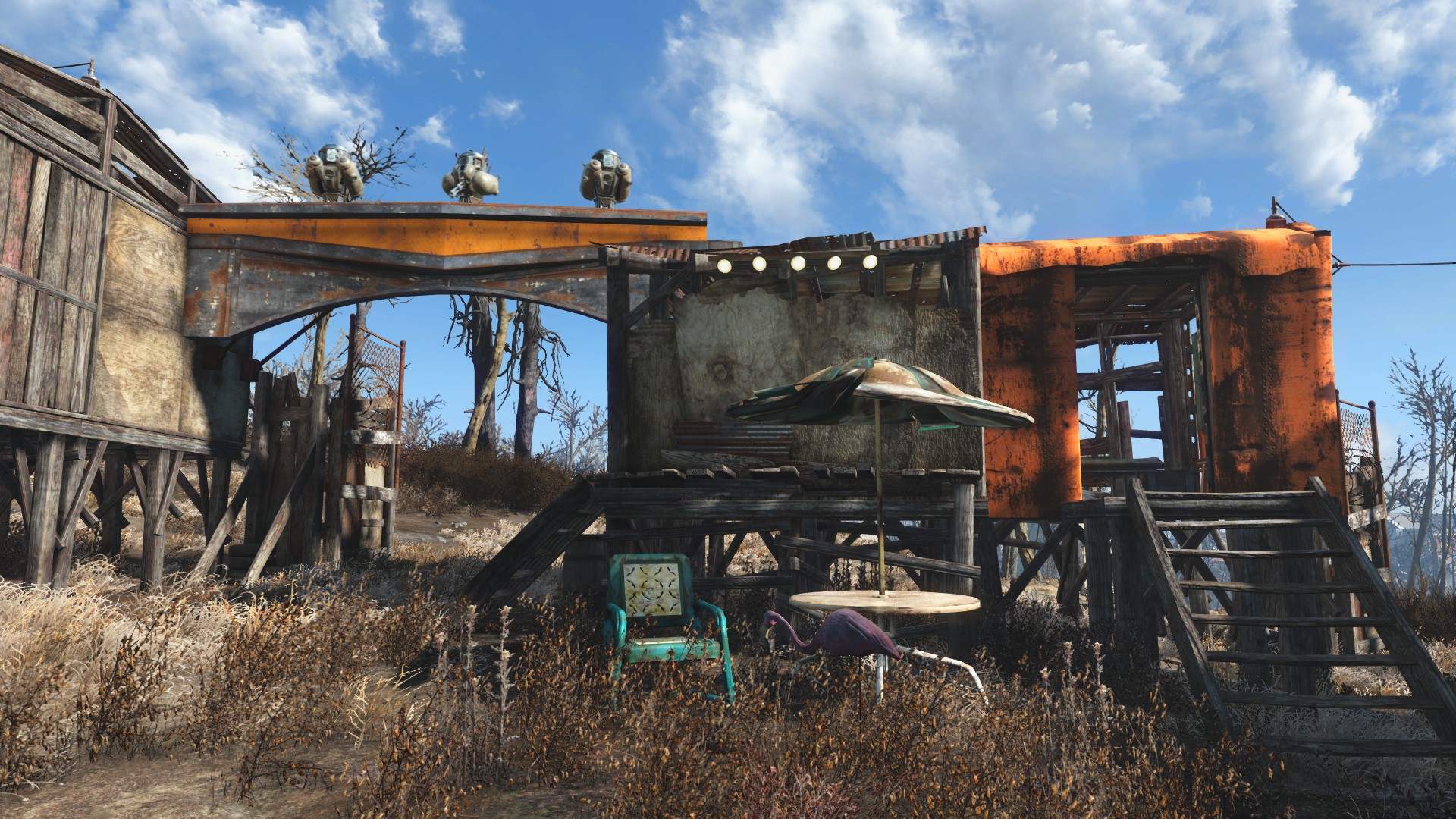 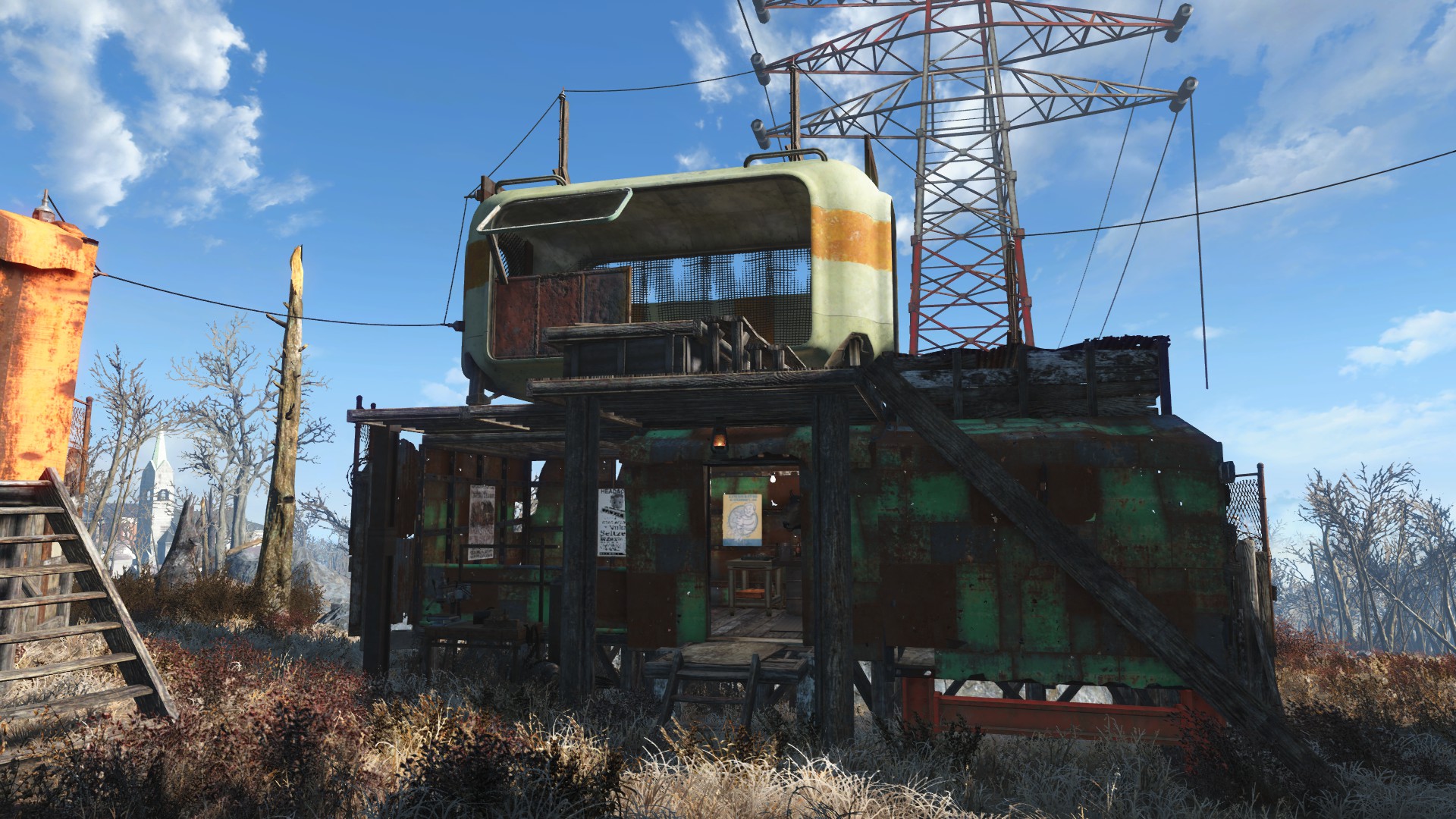 Pod with a view. 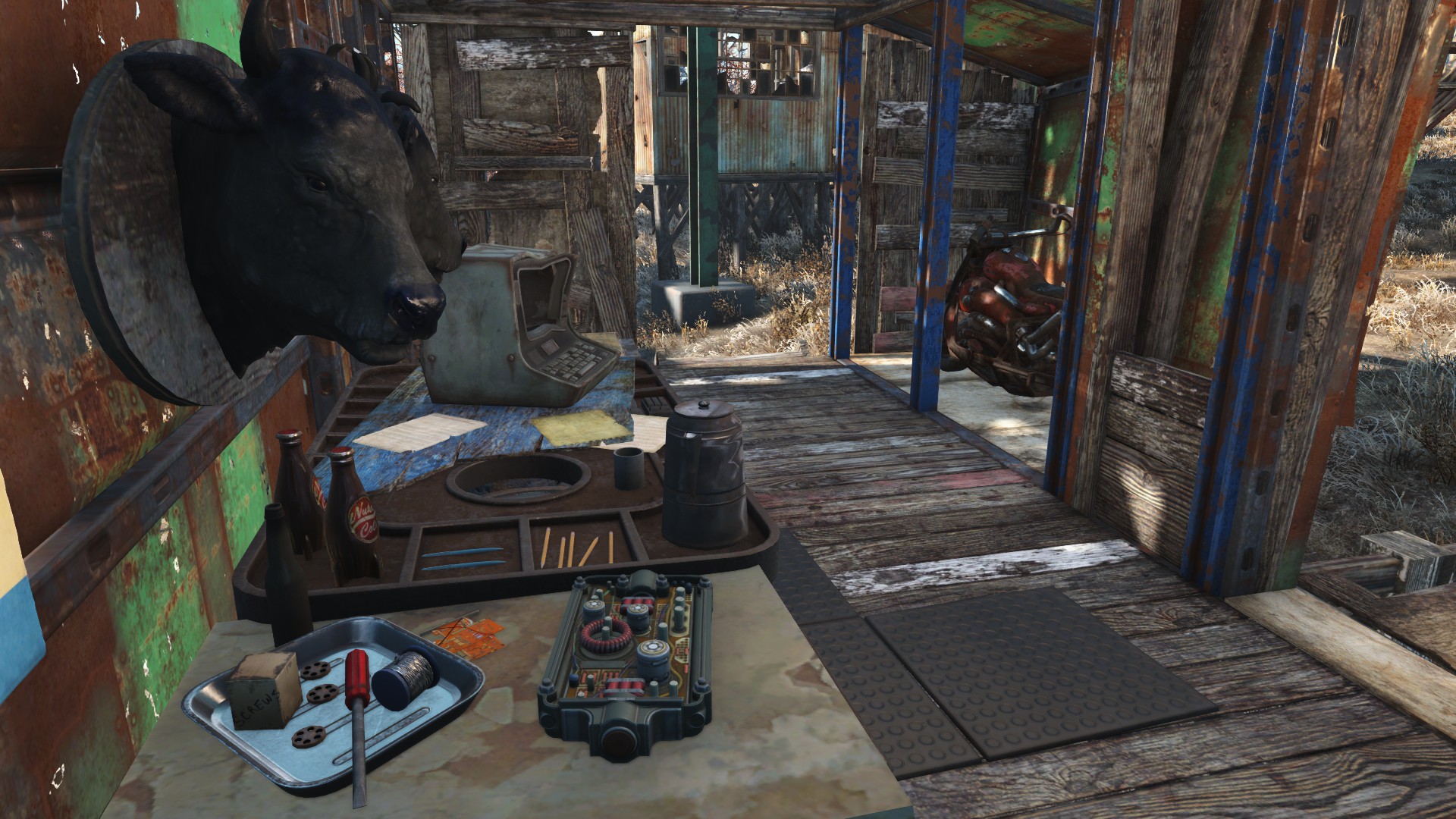 That’s it for now. I hope to finish my newest Conquest area pretty soon, at which time I will duly inflict it on the three people who look at these picture exhibitions.