Here I am, following through on my plan to show the outpost in two parts. Badaboom:

Naturally, I have a market. This one has two sides, built on an extended dock thing: 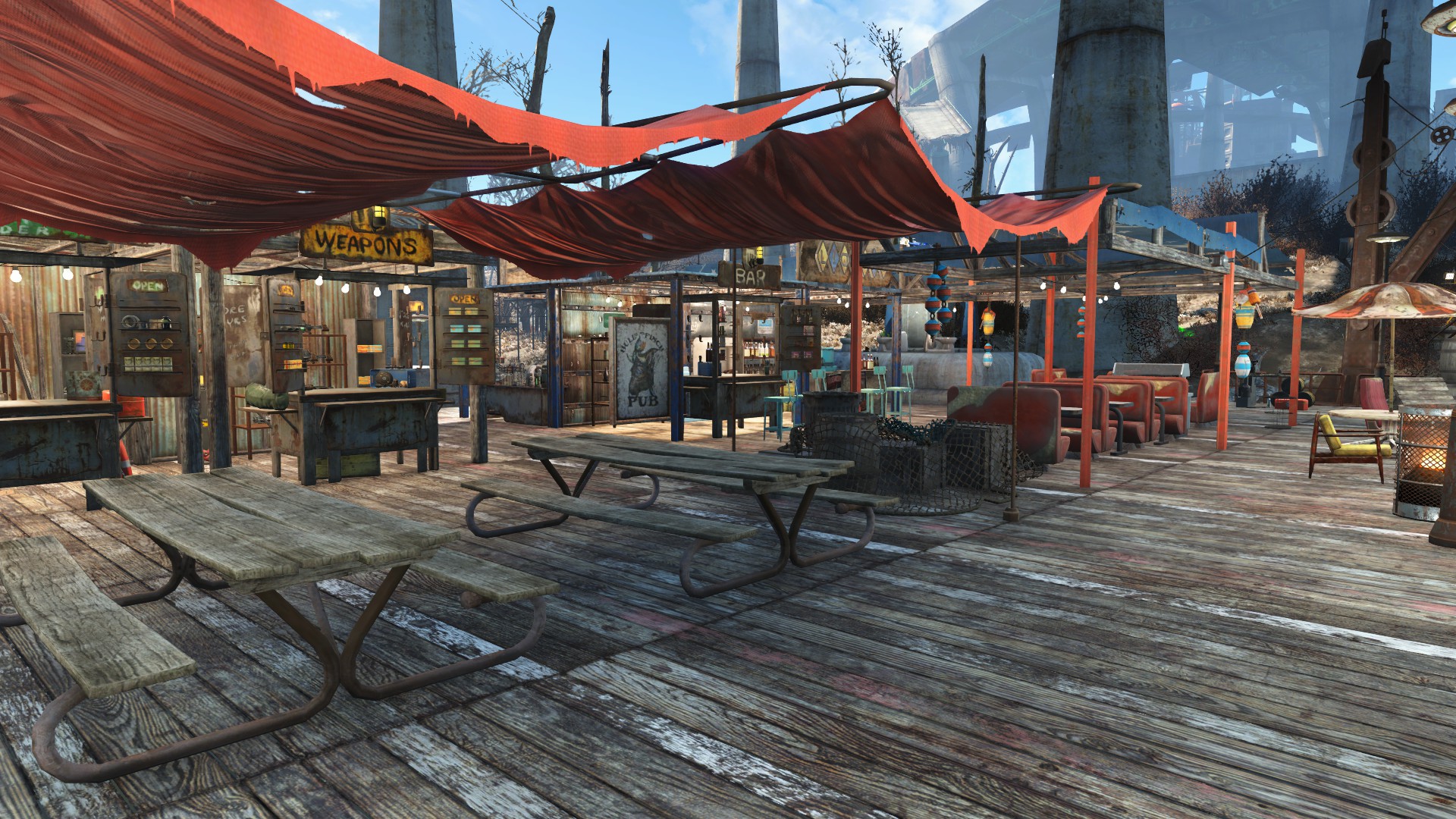 Shop till you puke.

When you’re tired of shopping, you can do some dining and rather constricted dancing: 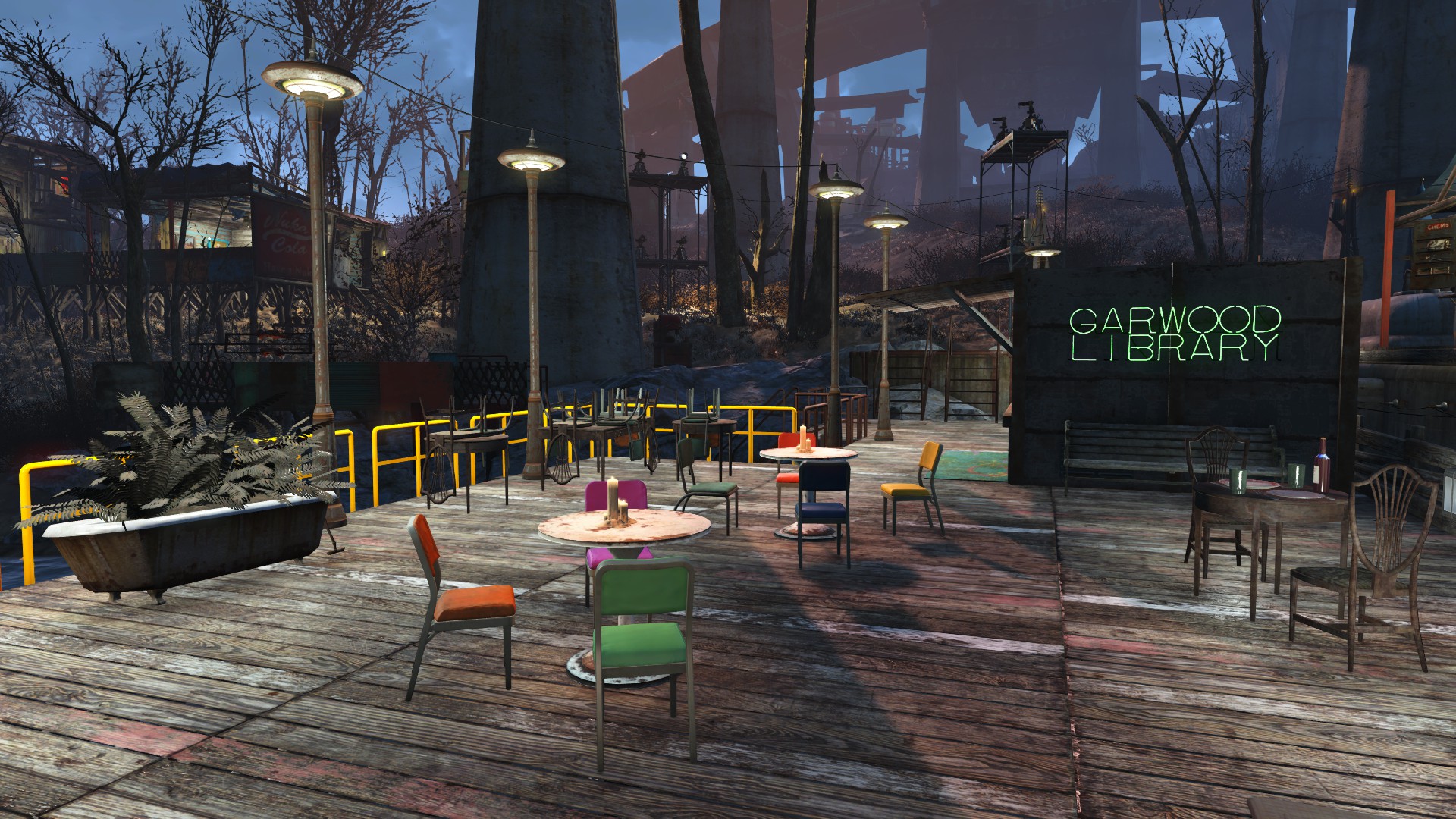 I just need to hire a band.

The more pretentious diners can use this little dock extension: 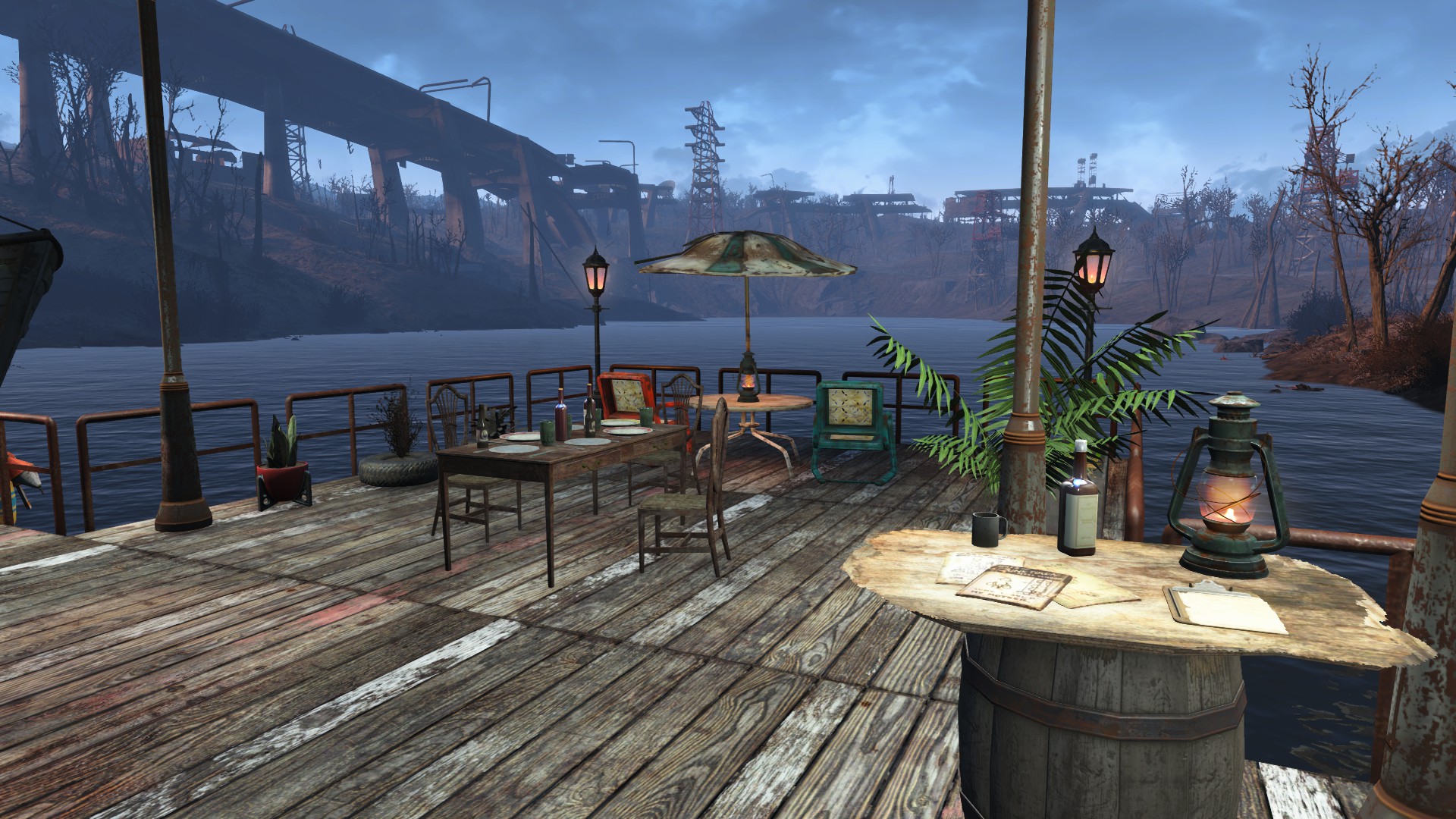 Maybe I’ll get a mod that spawns a big mirelurk queen here.

Because the dam is on a river, people need bridges to cross from the living quarters to the greenhouse: 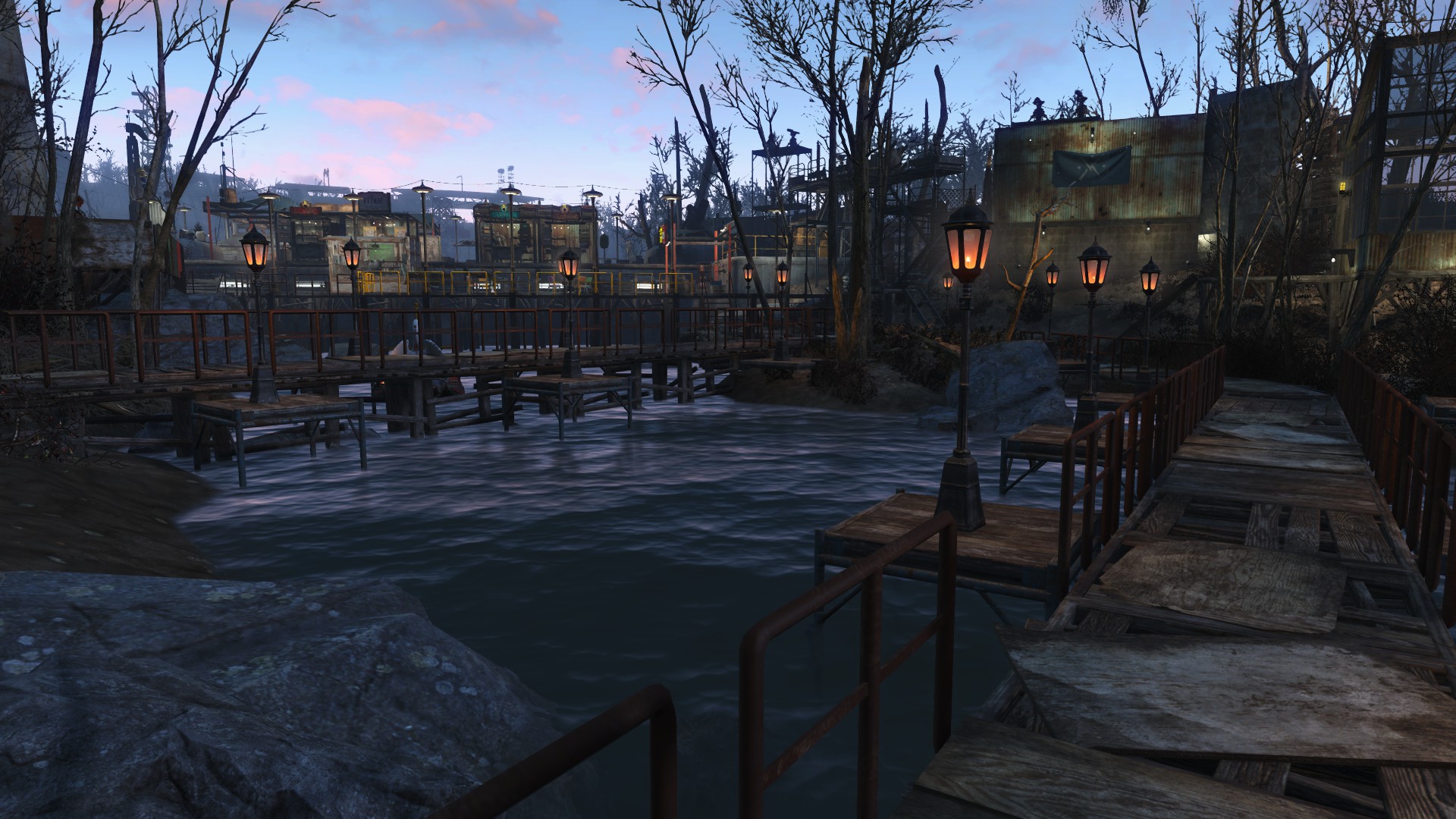 For those times you don’t want to wade.

Another shot of the same thing: 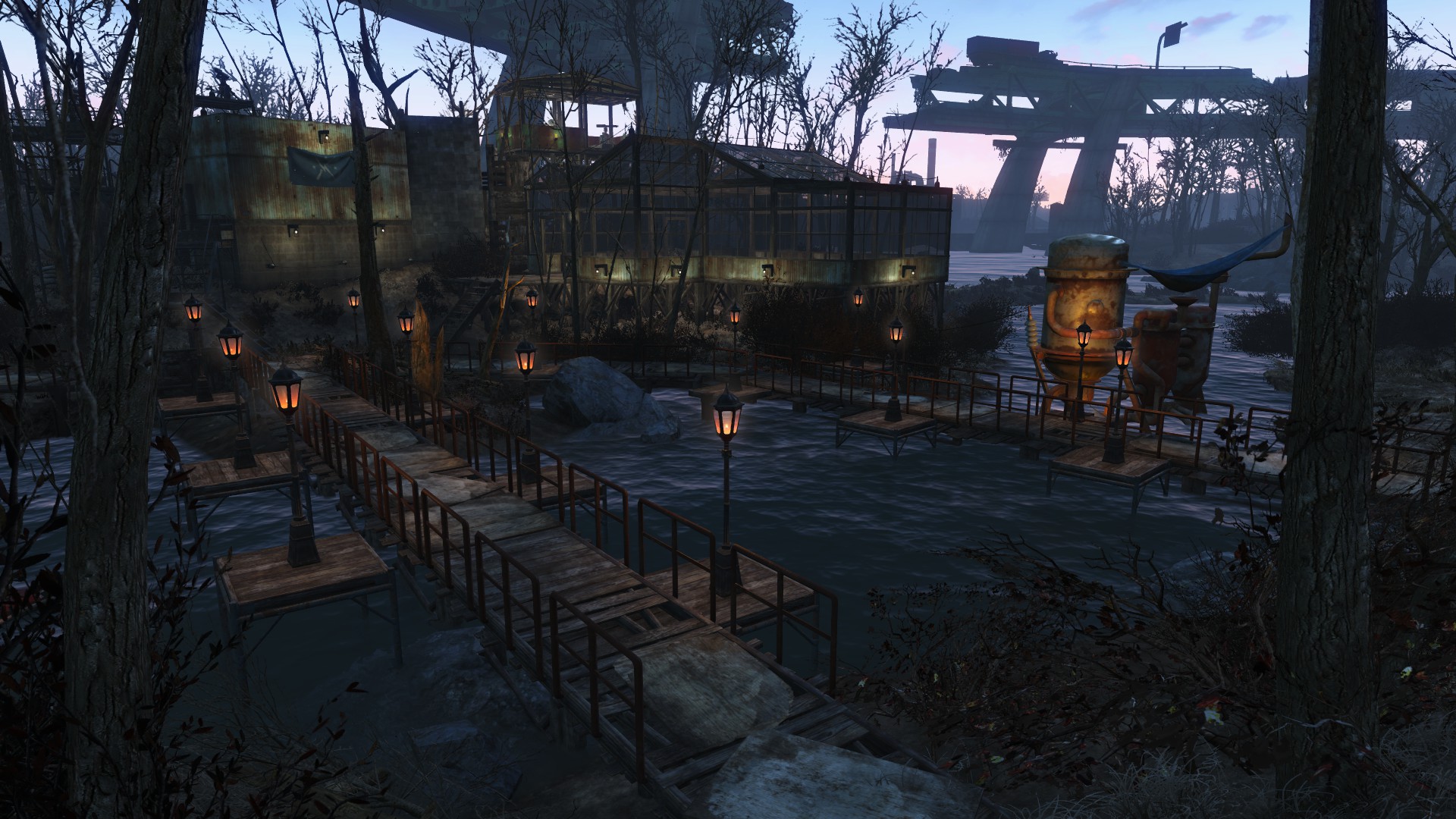 You can see the greenhouse and my water purifier off to the side.

I finally got a chance to use Swan’s boat: 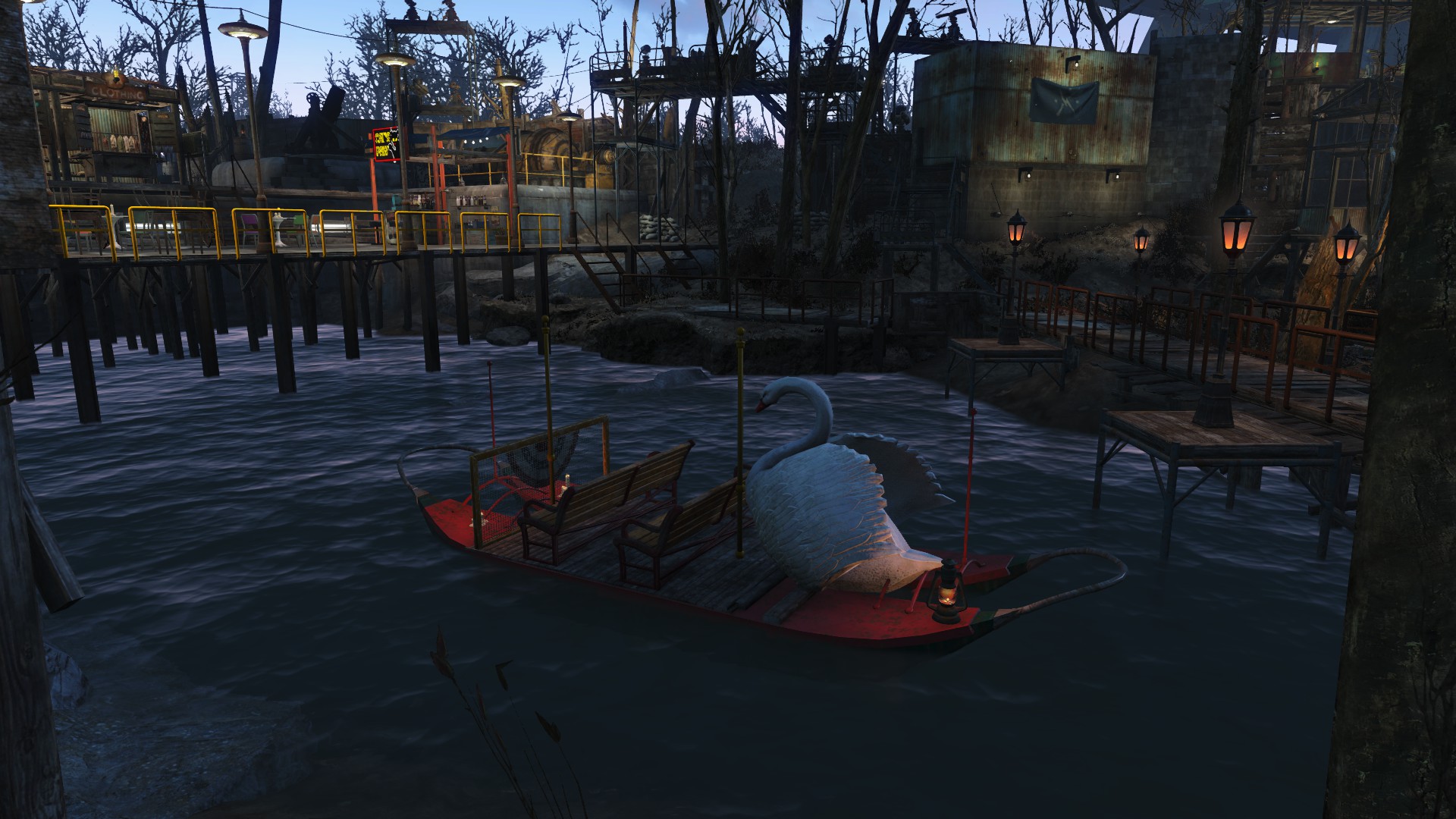 Swan is dead, so he’s okay with this.

The settlers found a boat and decided to repair it (that’s an engine on the crane hook). 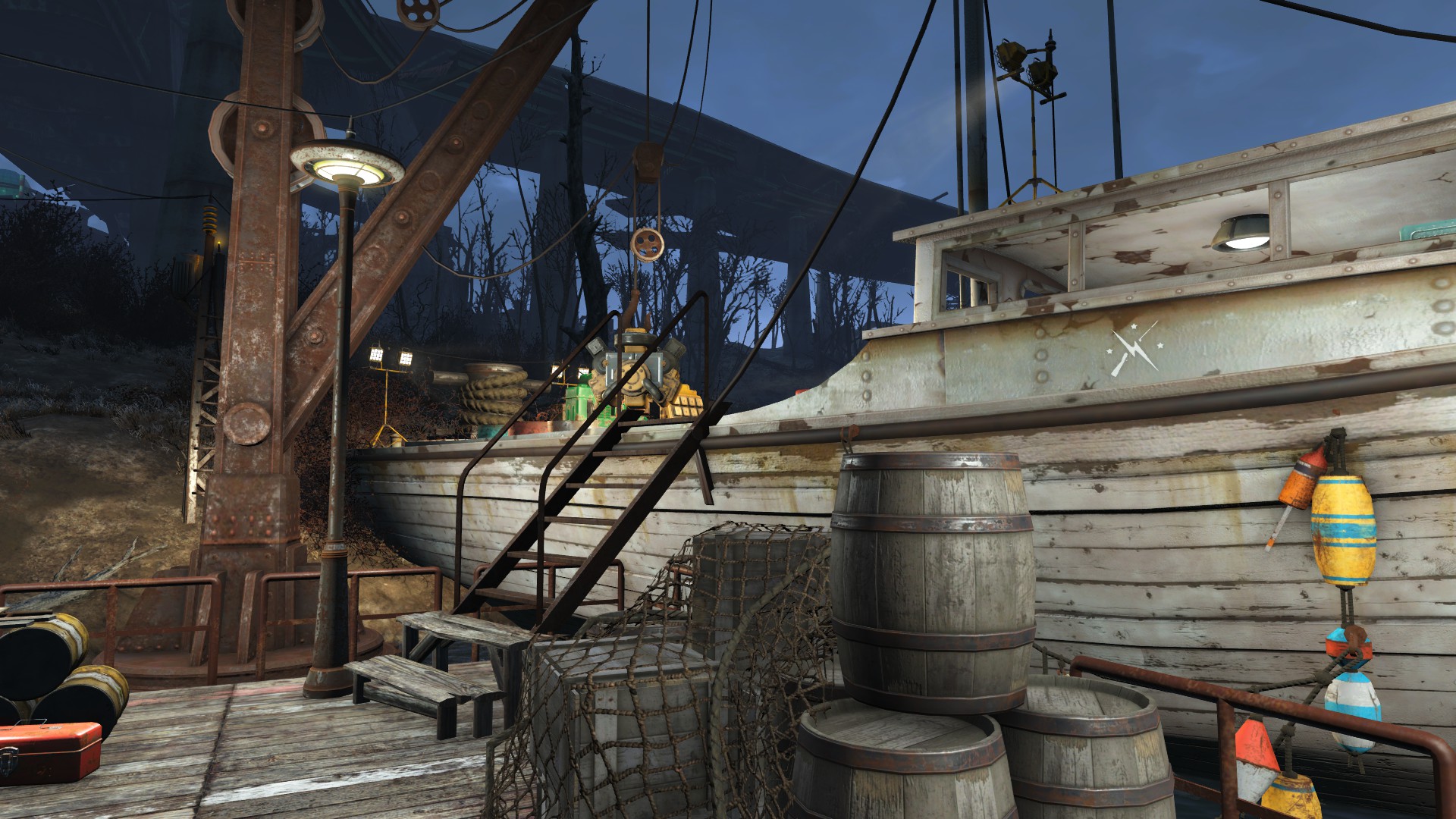 Now all they have to do is figure out how to steer it.

Finally, here’s a shrine dedicated to me. Every settlement will eventually get one. 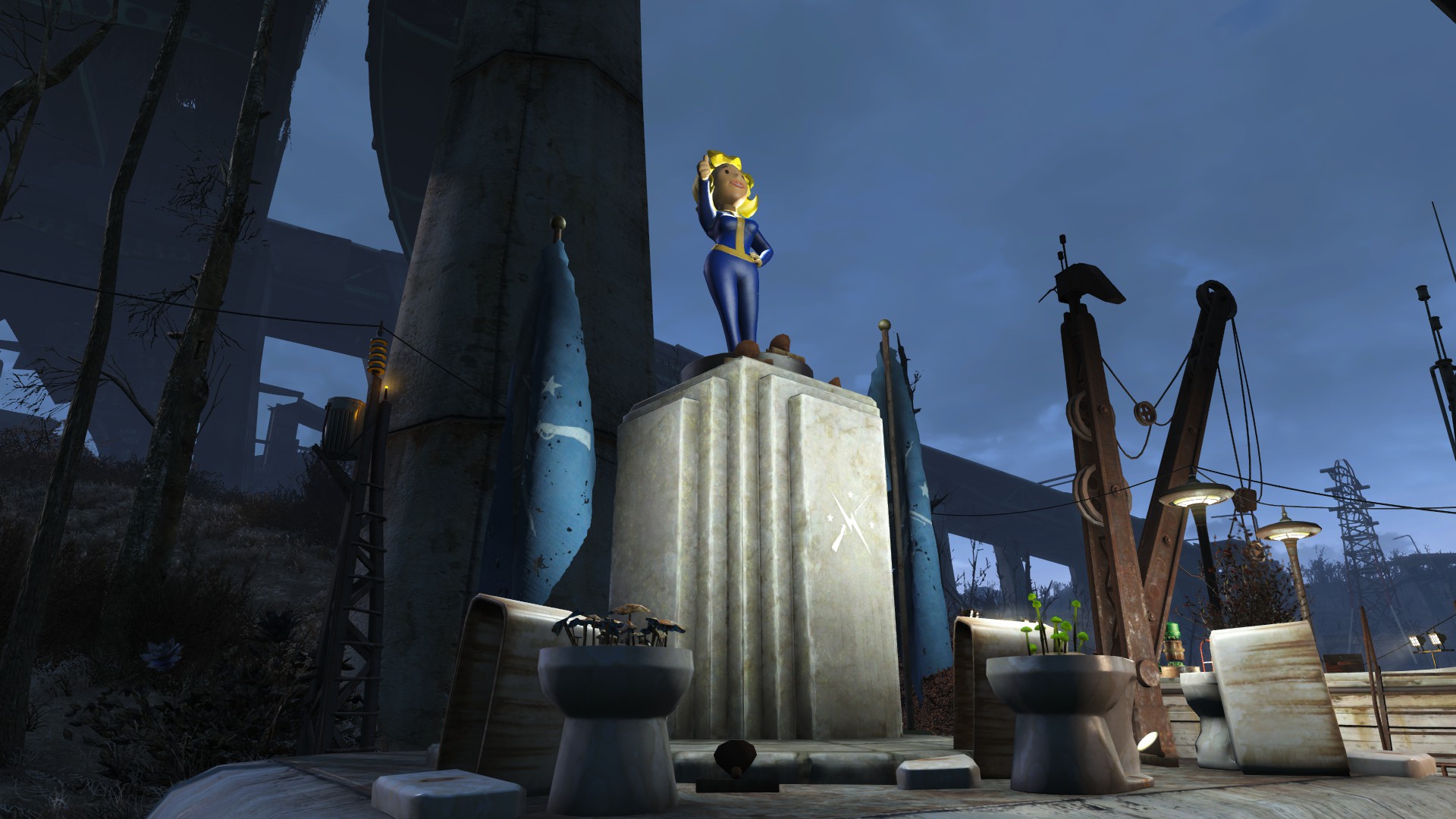 This is not a cult or anything. It’s more like a Washington or Lincoln deal, only with broken toilets.

I learned quite a lot doing this place. Since this is just a fraction of the outpost’s buildings and features, I may do a third part. Or maybe I’ll find another bare spot and start again.

Yes, it’s that time again. In this episode, I’ve used the Conquest mod to start a new location a bit south of Covenant. It has two fairly unique features: (1) it’s located on another dam; and (2) it’s unusually peaceful. The dam part is interesting because it actually holds back water on one side, making for some wonderful elevation challenges and opportunities. The peaceful part is genuinely unique. This is the only settlement I’ve found or started that has no enemies of any kind.

Because it’s so complex, this tour will be broken into two parts. If there’s a rationale for the division, I guess it’s size. This part emphasizes smaller structures and interiors. Later, I’ll go into the larger, more exotic features.

Here’s one of the entrances to the settlement: 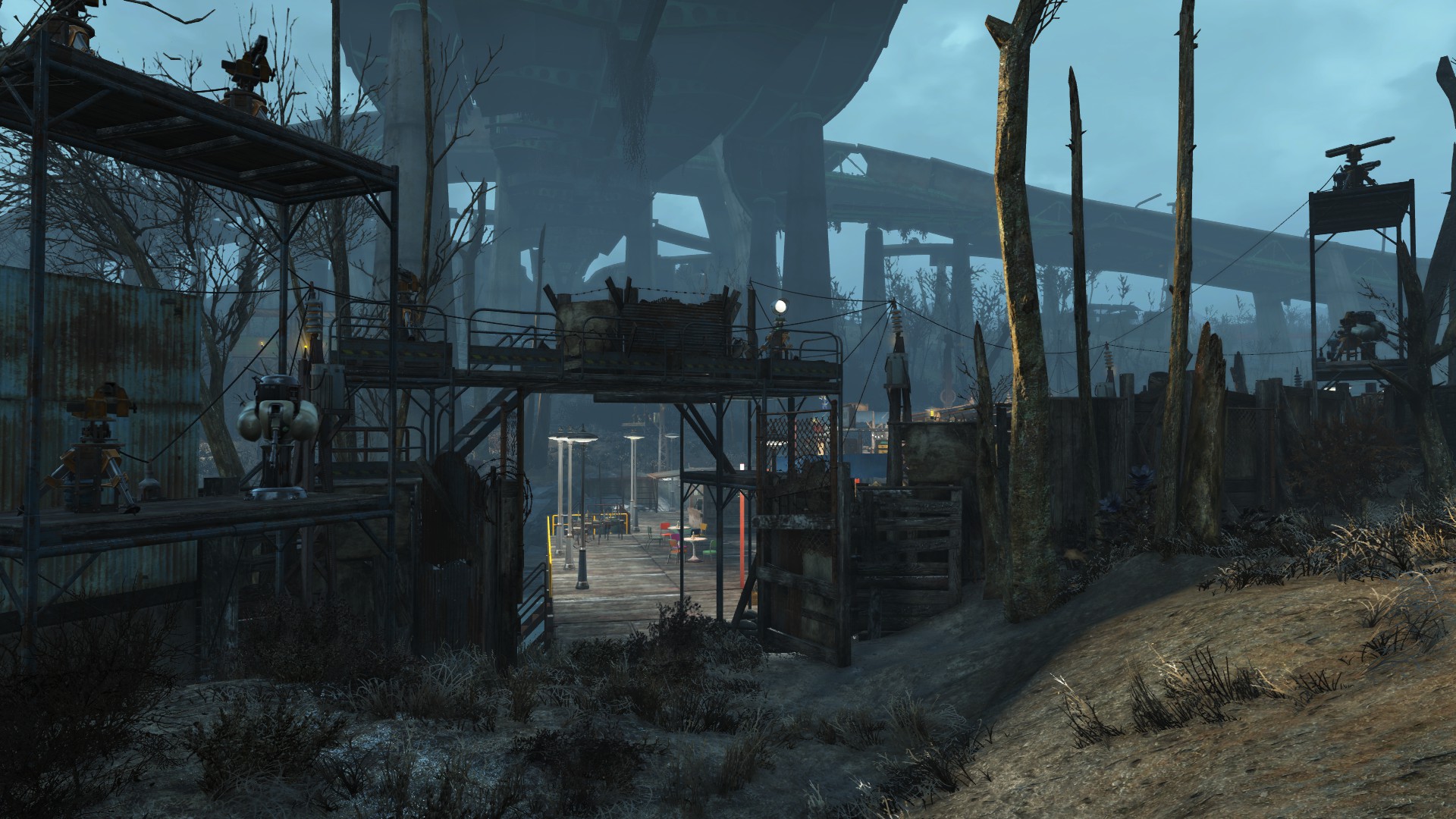 I don’t ordinarily use walls, since they don’t really keep enemies out. This time, however, I wanted to see how I could glitch things for a cobbledy, rickety effect.

Here are the living quarters. Yes, more stilts and elevation: 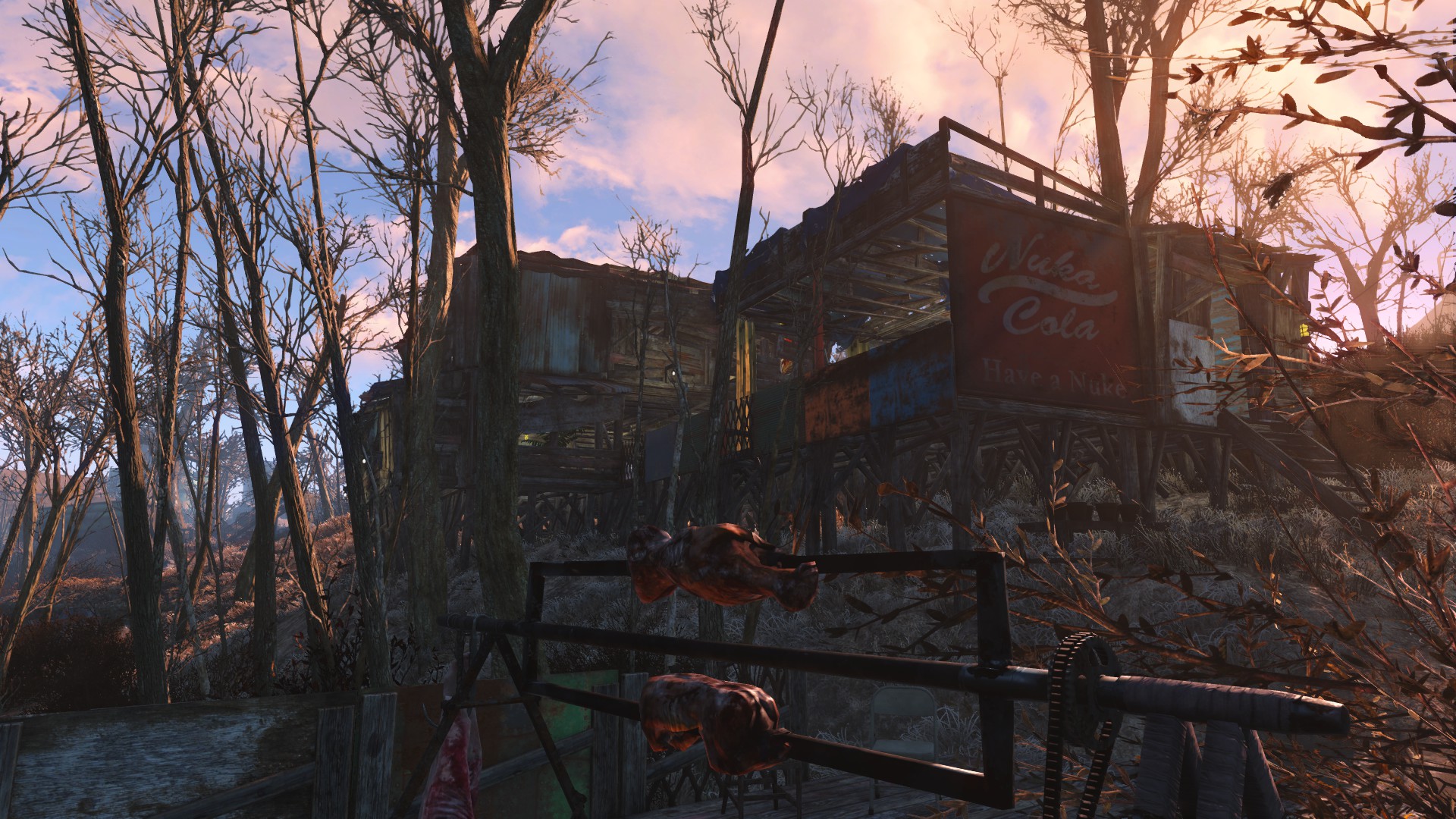 I’m so pleased with the Nuka Cola wall.

Here is a walkway adjoining the two dorm structures: 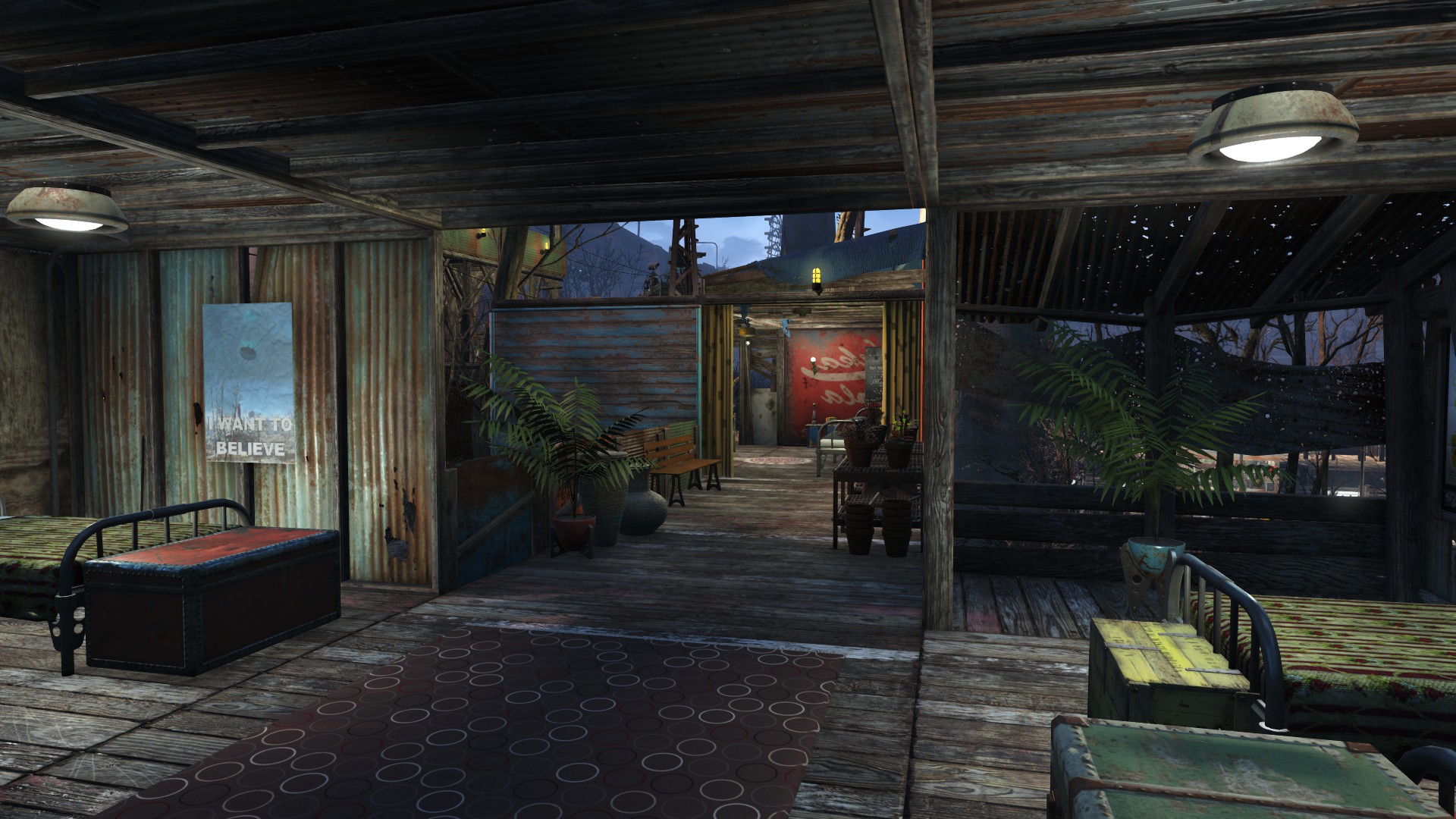 Here’s an interior of one of the dorm rooms: 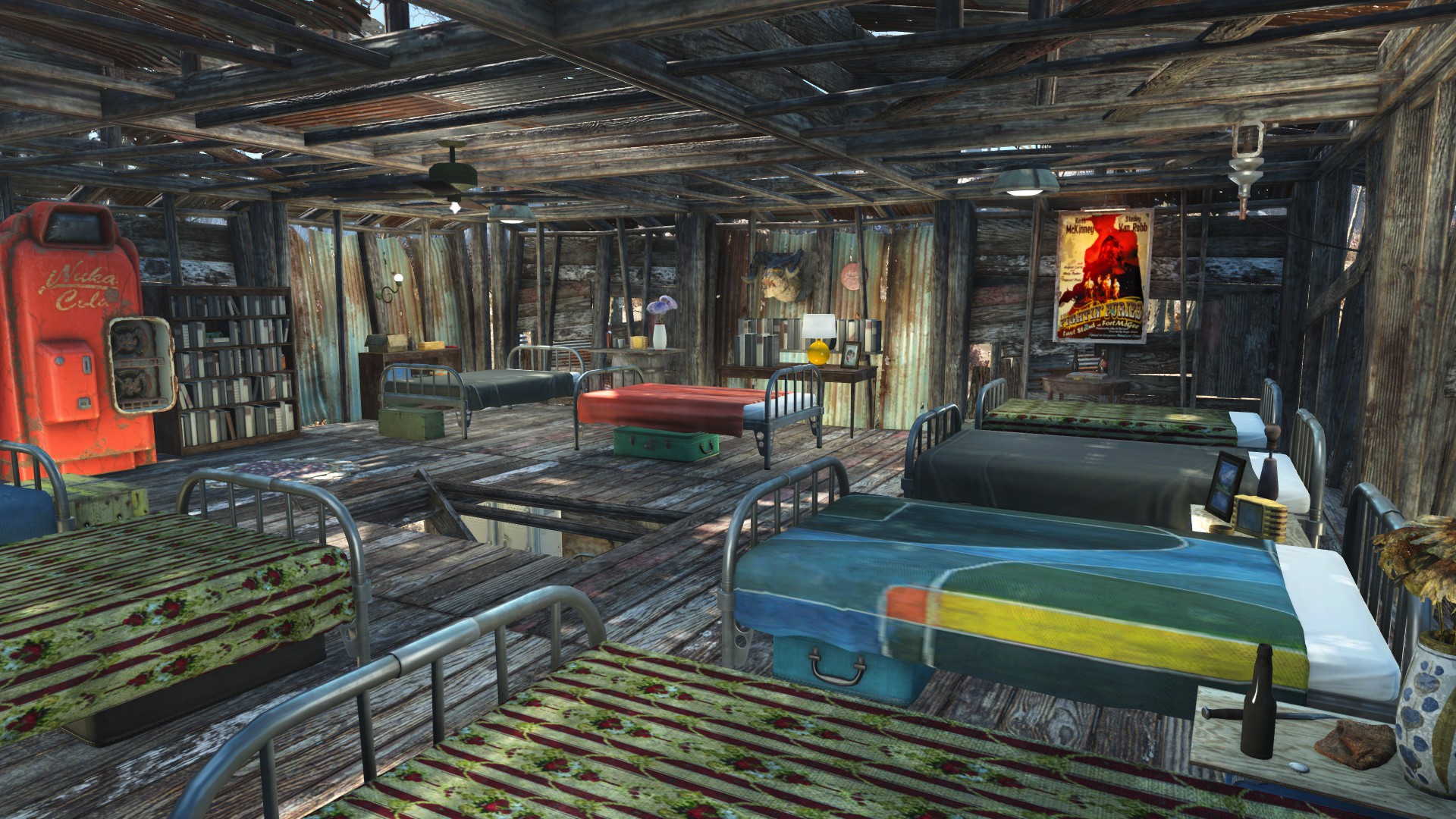 I found some nice blankets. Also, my wiring is improving.

I decided to include a library. It seems to me that reading would be valuable to settlers, especially since they can’t watch Cake Boss on TV. 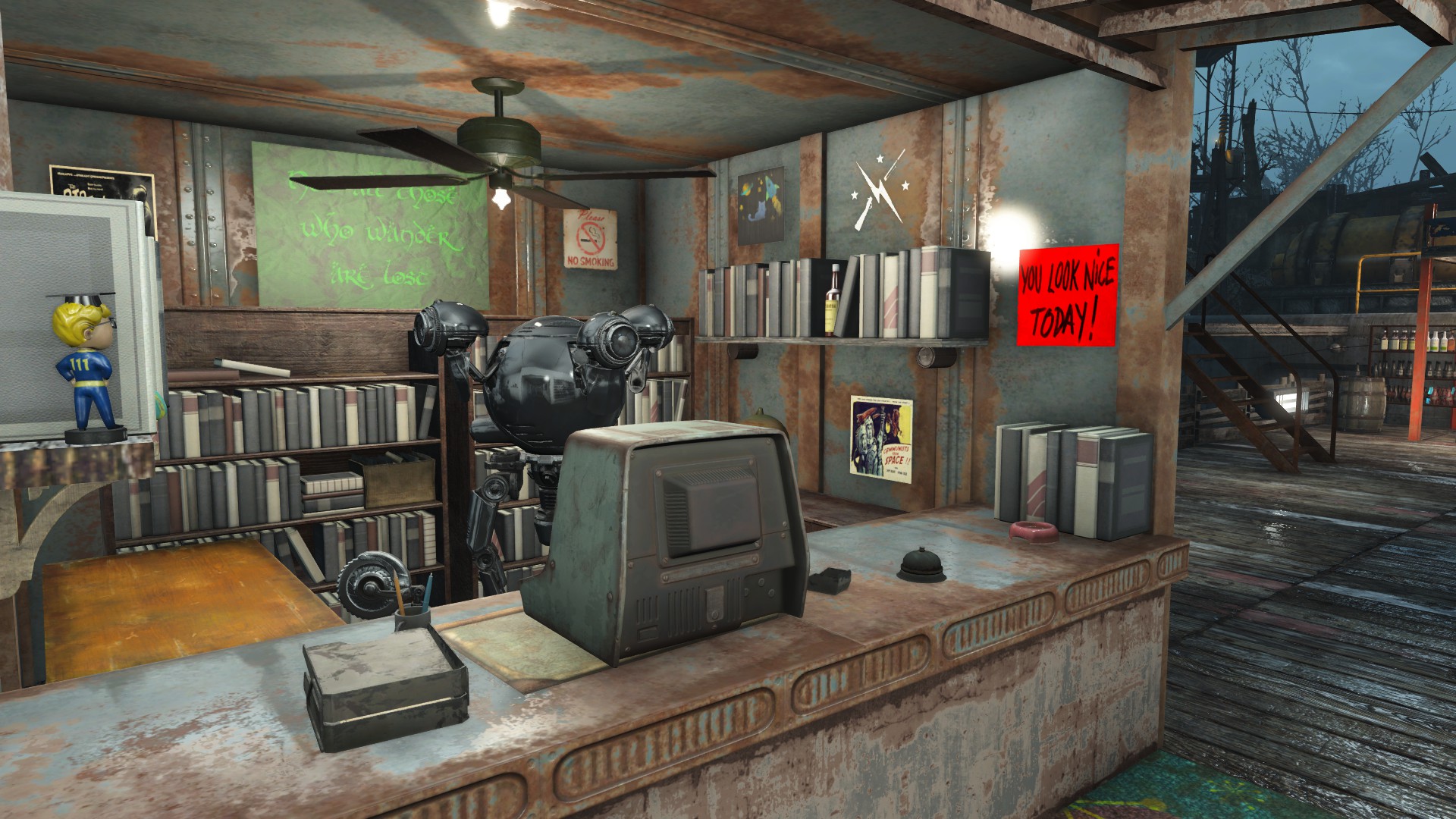 If you return books late, this robot will find you and kill you.

When they’re not reading, settlers drink, so here’s one of the bars: 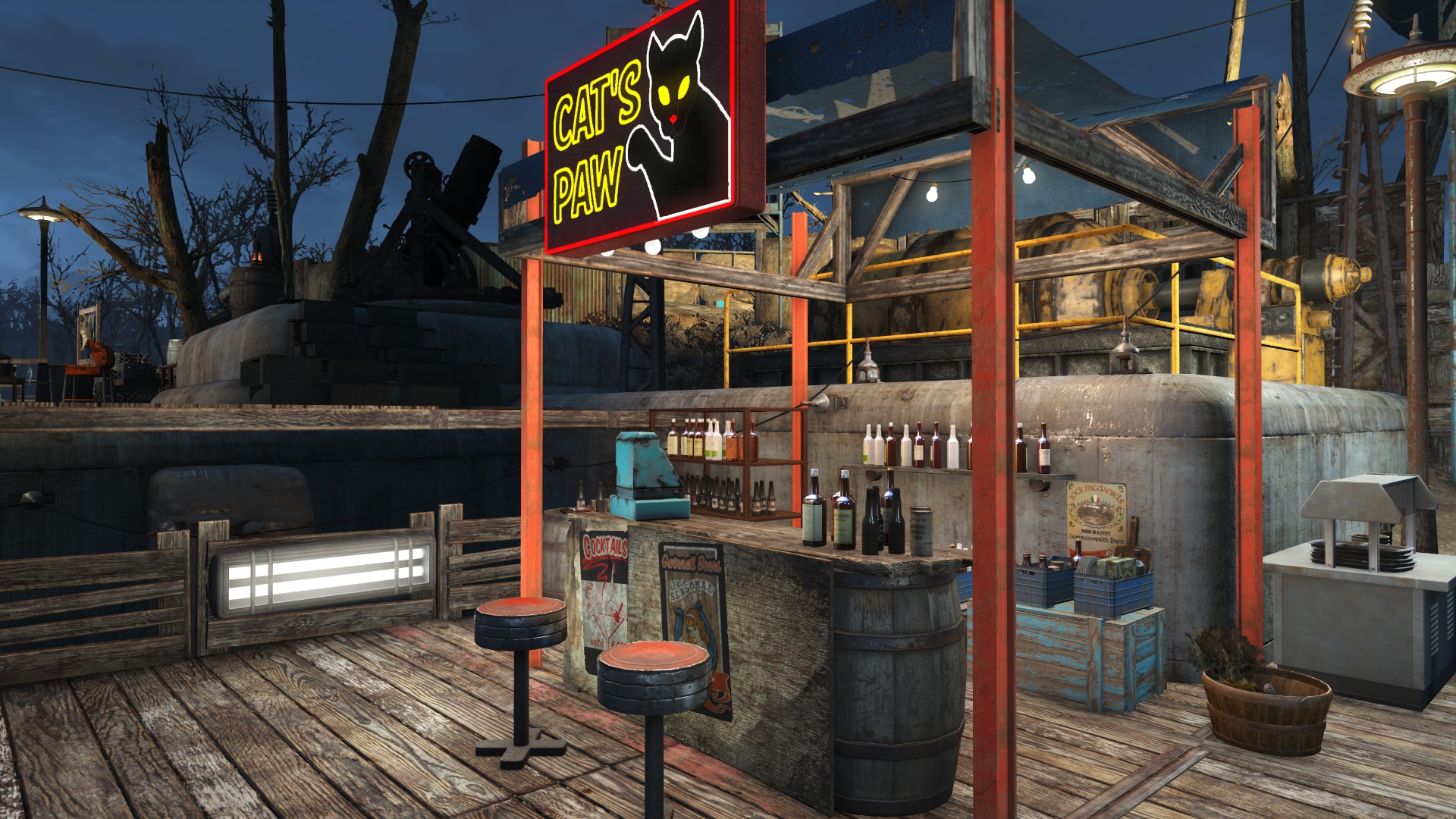 I don’t want you to think settlers drink a lot. Mostly, they just sample the bouquets and that sort of thing.

Finally, since one side of the dam holds back water, I thought settlers ought to fish. This area is where they process them. 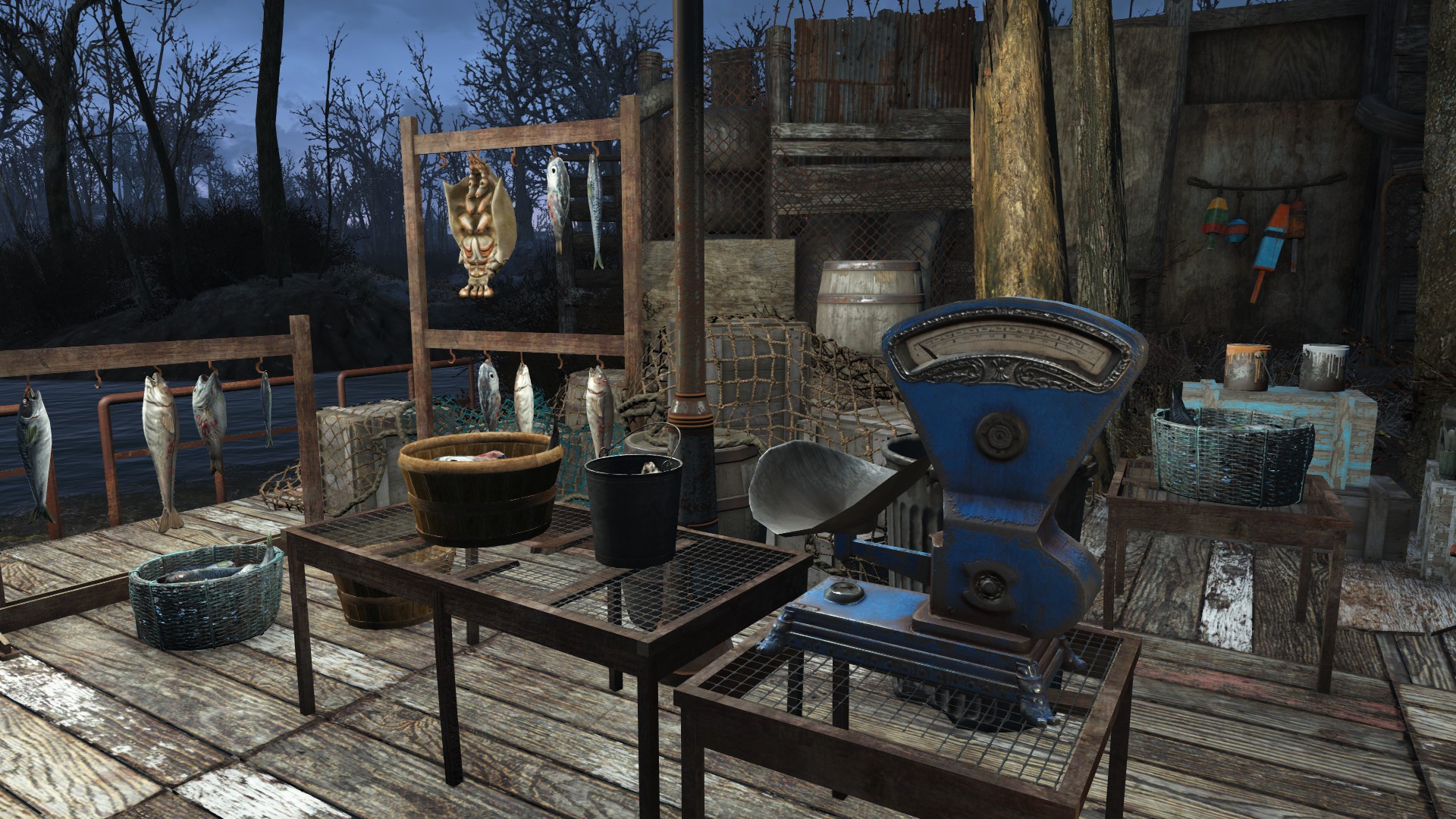 Sometimes, people have a hankering to gut fish. Go figure.

So tomorrow or soon afterwards, I’ll show you the bigger, cooler stuff. I’ll end by saying that I would live here in a second. In fact, I built myself a little house, which I probably won’t show because I have some, ah, you know, private things in there. You wouldn’t be interested.