I know that everyone has been anxiously awaiting my impressions of Nuka World, but I didn’t want to start it until I was reasonably sure I had reached a proper end-game point. 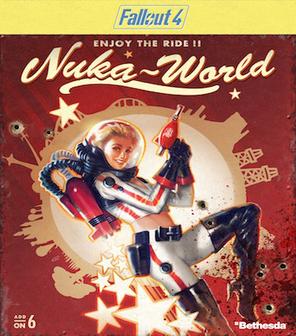 The thing about Nuka World is that it forces a choice on you that completely changes the Fallout 4 world you’ve built. Well, “force” is not quite the right word, because you can choose to remain your decent, upstanding Minute Man General self, but if you go this way, you’ll miss out on a raft of new privileges and perks. If you go the other way, you lose all the work you’ve put into crafting your settlements and establishing their happiness.

To say that Nuka World is a game-changer is an understatement. Here’s the deal:

Nuka World is a huge amusement park built by the Nuka Cola Corporation. It borrows heavily from Disney but probably also owes some of its ideas to Universal, Knott’s Berry Farm, Six Flags Over Texas, and other mega-parks. I imagine there are also sneaky references to fictional places like Duff Gardens. The land mass is quite large, with acreage devoted to multiple discrete sub-parks, each with its own theme: Dry Rock Gulch, Kiddie Kingdom, the Galactic Zone, etc. Everything you would expect to see is there: huge rides, museums, restaurants, side-show attractions, etc. Of course, it’s all about 200 years old and overgrown with horrible mutated flora. Parts of it are so radio-active that you need a hazmat suit or power armor. Some of the fauna is new (e.g. bloodworms) and some is reskinned (e.g., gatorclaws). Minigames abound, as do interesting side quests. And, of course, if you want Nuka Cola, this is the place to be. Every flavor is available, along with interesting recipes for crafting.

As you’re probably aware, Nuka World has been partially claimed by raider gangs. If you’ve always wondered what it would be like to talk to raiders and form relationships with them, this is your DLC. The main quest introduces you to three factions: the Pack, the Disciples, and the Operators. Each gang has its own ideology. Pack members base their social structure on those of predatory animals, with an “alpha” in charge. They’re also slave traders. The Disciples are grounded wholly in violence, anarchy, and nihilism. The Operators value caps above all else and therefore are more refined than their competitors. Somewhat reminiscent of the Ventrue faction in Vampire: The Masquerade, the Operators are generally well-spoken, shrewd, and as elegant as raiders can reasonably be. The other gangs sit in the dirt and eat raw meat, but the Operators have place settings and napkins. I suspect that if the Sole Survivor never showed up, the natural evolution of Nuka World would eventually select the Operators as its dominant species. Mags Black and her brother William lead the Operators. (Credit to Jspoelstra on the Fallout Wiki, which reduced this to postage-stamp size.)

Anyway, about the game-changer part:

If you decide to play out the raider story, you’ll end up co-opting, destroying, and enslaving your present settlements. This is inevitable because the raiders are determined to take over the entire Commonwealth. You end up creating new raider settlements, and since raiders don’t like to farm or perform other menial tasks, your “good” settlers become their chattel. As a result, everything about settlement building changes. You have to start over with the building aspect because your ties to the old ways have been broken. Nothing really functions as it once did, so you have to re-learn settlement crafting.

If you decide to kill all the raider bosses, you miss out on some attractive perks and interesting game functionality, but you keep what you’ve built (and Preston still likes you).

In spite of this dilemma, Nuka World is a much better DLC than Far Harbor. The world is full of things to do, people to meet, and lives to end. The loot is considerably improved, and the general amusement factor is much higher in every way. Beware, though: you should be about level 30 before starting. Even then, you’ll probably get your gluteus maximus handed to you.

No Bethesda DLC is worth the retail asking price, but Nuka World is a good sale acquisition.

Posted by muppet on November 26, 2016
Posted in: Uncategorized. 1 comment

I could have a beer with these guys

Posted by muppet on November 25, 2016
Posted in: Uncategorized. 1 comment

Now that I’m level 114 in Fallout 4, I’m pretty sure I’ve killed almost everything and visited almost every place. I do still find weird locations, like the Electrician’s Hobby Club, and I have yet to come across muppet’s sentry bot eternally awaiting guests at its tea party. I also have yet to start Nuka-World because I have to make absolutely sure I’m at the very end-end game before committing to it (the changes it makes are catastrophic). So mostly what I do these days is provoke gunfights in the Quincy Ruins and embellish my settlements.

I’m still having a good time with all the DLC stuff, and I have discovered some interesting things about making my settlers happy.

So be sure to coddle your settlers. Really high happiness in Vault 88 results in a population wishing they could give you birthday presents and write songs about you. No joke.

Also, be sure to arm your settlers with all the high-level weapons you collect from enemies. An assault rifle will keep your people alive longer than a pipe pistol.

Prepare for America to be great again

Posted by Simmery Simulacrum on November 9, 2016
Posted in: Uncategorized. 2 comments

I’m prepared for greatness. How about you?