This is just an update on my Fallout 4 settlement-building binge. I’ve made quite a lot of improvements to all the settlements, and I’ll get to those in future posts, but today I wanted to share what I’ve done at the Castle. As you know, this location is one of the big deals in the Minute Men story line. I’m not sure why, other than the introduction of a Mirelurk Queen and the tutorial on building artillery. Once you’ve cleared the place and built your cannons, you very likely won’t pay attention to it again until Preston calls on you to defend it during a fairly exciting attack by whatever factions you’ve managed to upset.

Recently, I’ve been giving the Castle some thought, and it seems to me that Preston had in mind two things when he suggested taking it over: (1) an iconic headquarters to demonstrate the strength of the Minute Men (not in the spirit of intimidation but, rather, assurance for potential settlers), and (2) a training facility for the roaming bands of Minute Men you see occasionally on your travels. Far be it from me to pay attention to anything Preston says or thinks, but it began to sadden me that the Castle was little more than a roomy settlement with walls and cannons. It should be a symbol of strength and relative prosperity. It should announce to the Wasteland that the Minute Men are more than a shabby collection of nomads doing random good deeds. They are the hope of the devastated Commonwealth. Settlers should see that they’re reasonably organized and up to something bigger than rescuing kidnapped daughters and shooting up various rowdy-dowdies.

So I began to reconceive the Castle in a manner befitting a purposeful faction. I also decided to give mods another try. I was careful about which ones I chose and how I ordered them, so they work pretty well. I could tell you which ones they are, but that would require looking up their names, and I would rather show you some pictures.

When travelers and provisioners approach, they see this (actually more, but this is as much as I could get into the frame): 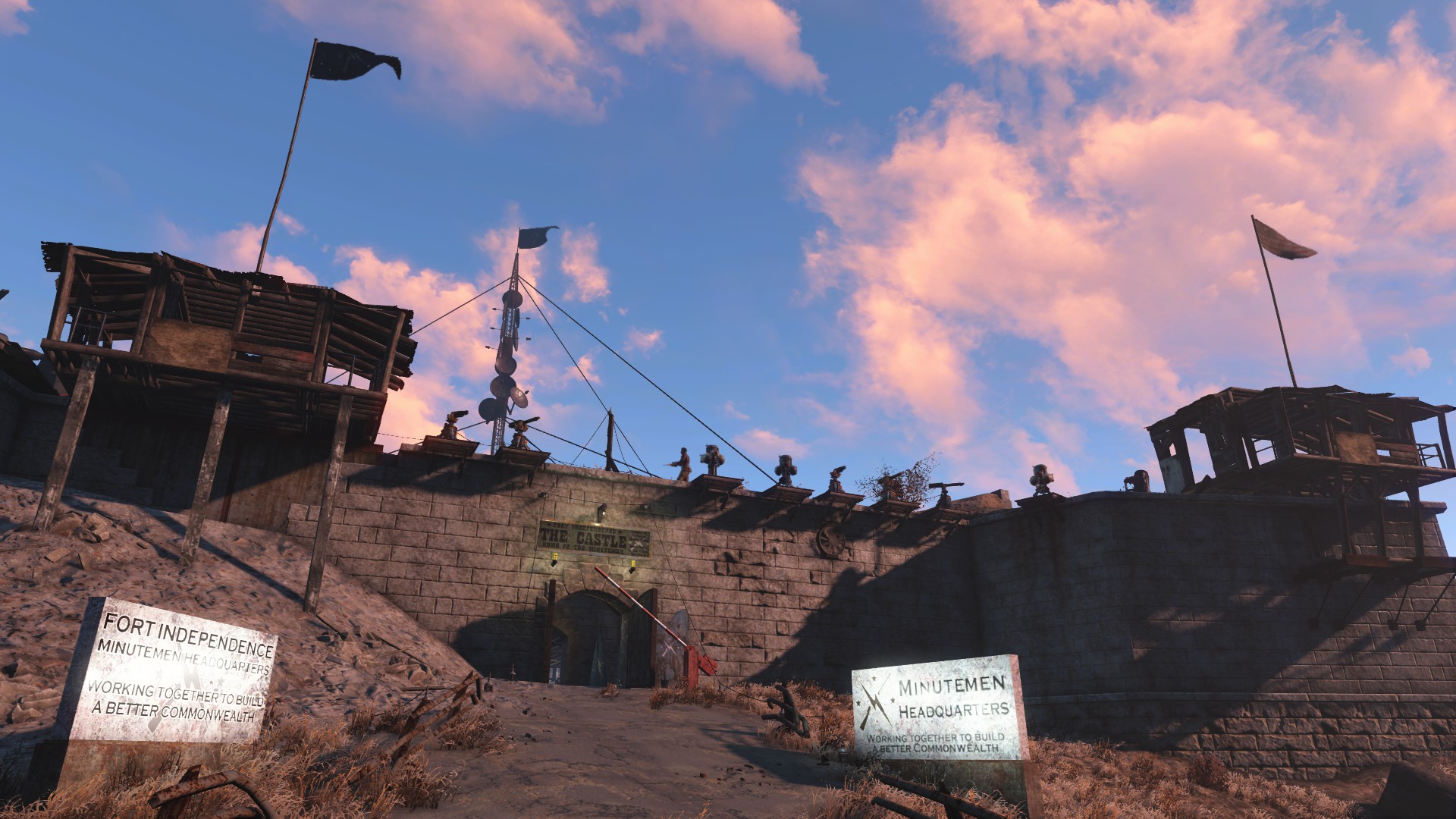 For educational purposes, the fort is clearly labeled.

Most attacks come from this side, so it’s a little better fortified than the others. Sorry about the illumination on the signs. Fallout 4’s lights are usually either too dark or too bright. 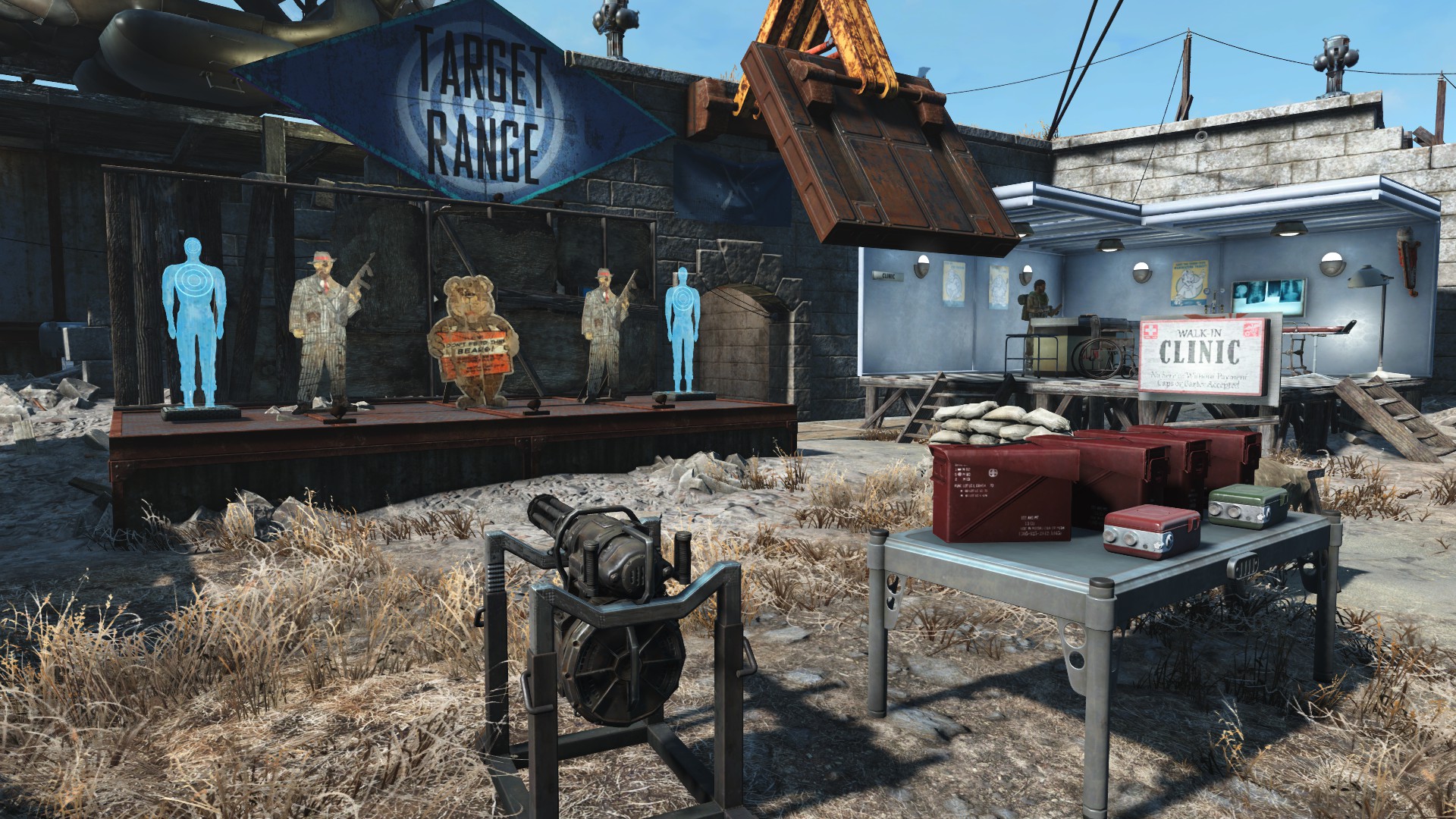 Recruits are expected to shoot miniguns vigorously at non-threatening figures.

I know you were wondering about the clinic in the last shot, so here it is again. The look is not really in keeping with the rest of the Castle’s decor, but Preston wanted a proper state-of-the-art medical center for those times when recruits shoot themselves or each other — or simply fall off the walls. As an excuse for the shiny look, I’ll tell you that an experienced patrol ransacked what they could find from the Institute’s rubble. 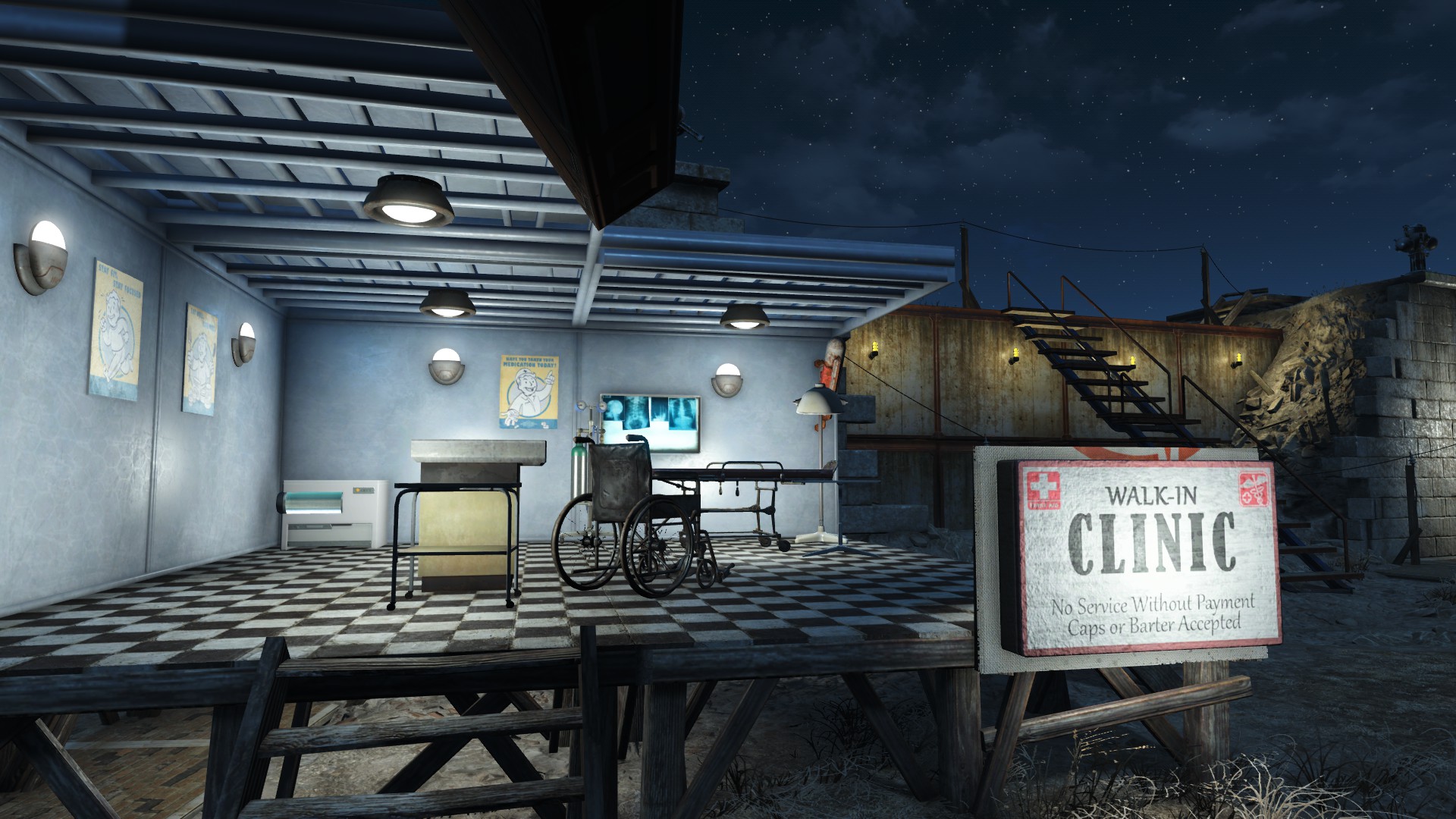 If I could find more Institute crap, I would add it.

I’m rather proud of the combination barracks/market. Never let it be said that the Minute Men can’t salvage great signs. 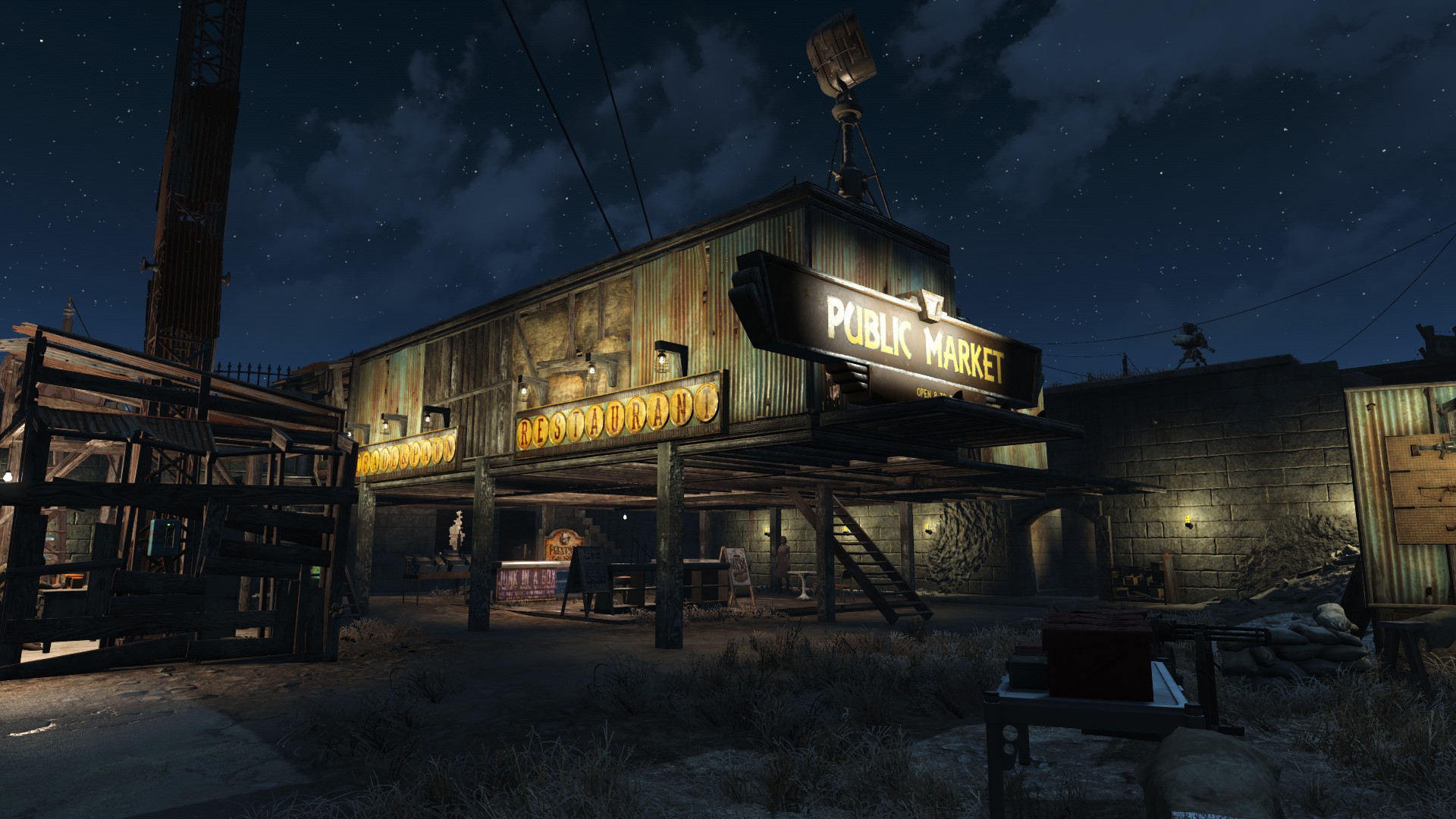 All of this was hard, but the hardest part was illuminating the “Public Market” sign.

Now, since the Minute Men are becoming a force to be reckoned with, etc., it’s only proper that they would find abandoned military vehicles and drag them to unlikely spots. In this shot, they’ve gotten hold of a vertibird and are doing their fumbly best to refit it. 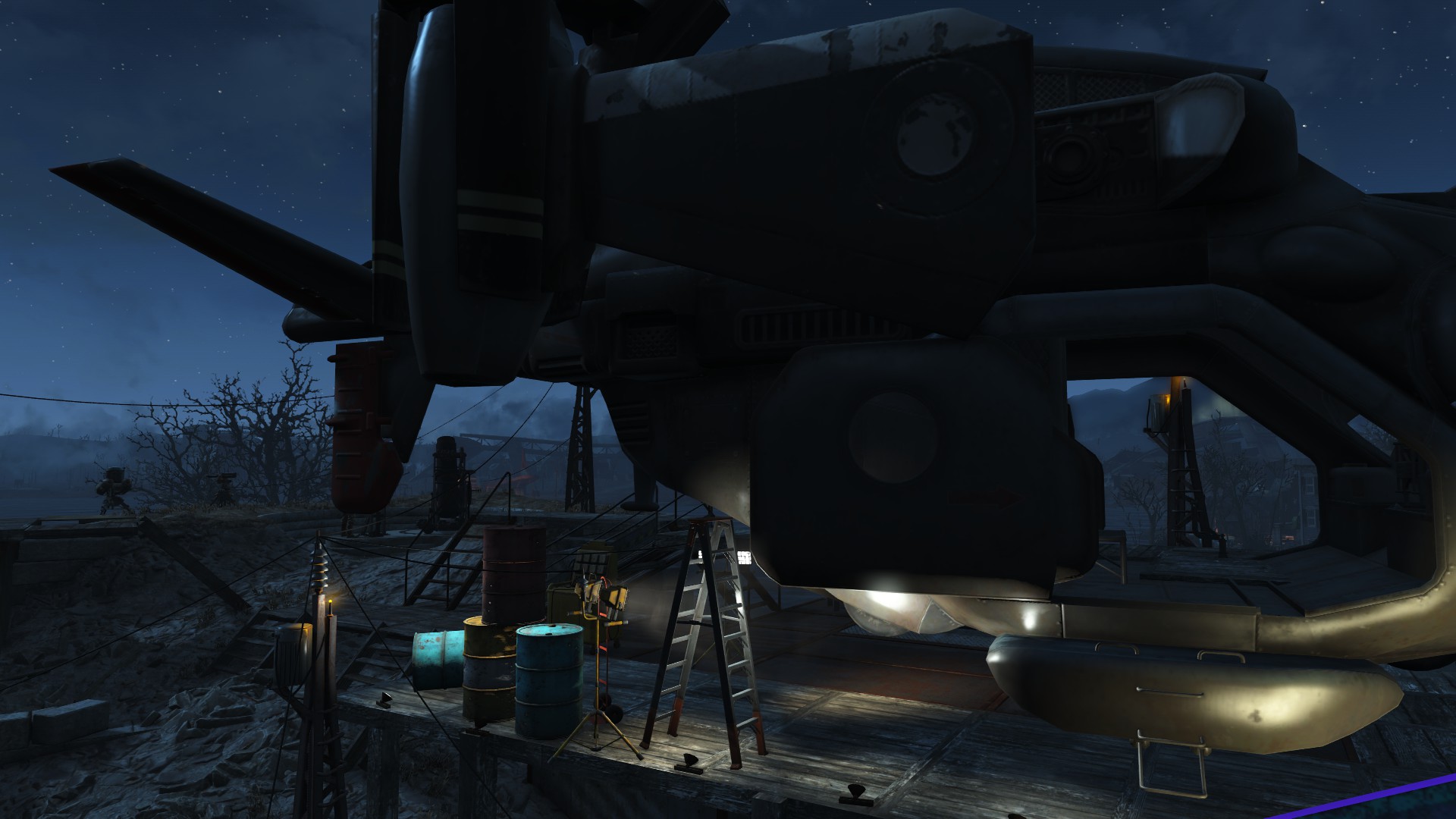 Yes, I’m aware that a service light tripod leg is hanging off the edge, but I’m not redoing this screenshot.

Finally, as part of their training, recruits learn about melee engagements with multiple attackers. This is a another reason for the clinic, so I guess Preston was more far-seeing than I thought. (That didn’t keep me from exiling him to Red Rocket and making him wear a dress and a chef’s hat.) 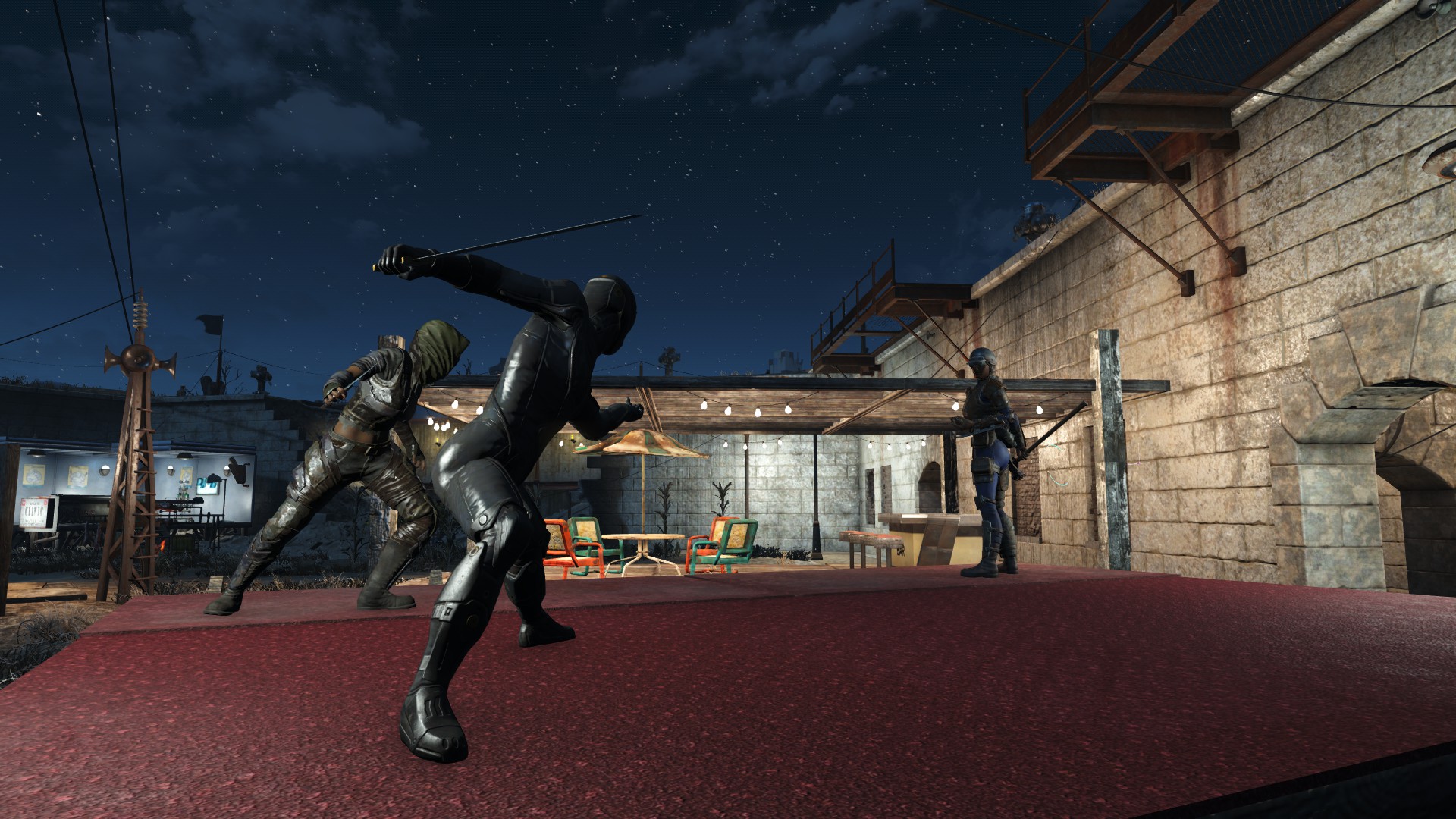 Sorry for bragging, but I think this is one of the coolest screenshots I’ve ever seen.

So that’s all for now. As mentioned above, I’m working on other settlements and will show those as time allows. I’m especially fond of Nordhagen Beach. In a future update, you may get to see the fishing poles I’ve been painstakingly planting around my custom dock. I may also show you my pampered lone human at Graygarden.

4 comments on “Remodeling the Castle”