As I’m in between games that really interest me, I’m spending time in Fallout 4 again. Presently, I’m level 138, so I’ve done just about everything there is to do, barring loading an early save and joining the Institute, which I have no interest in doing. So that leaves the other half of the game, namely settlement building. Initially, I wasn’t too intrigued by this aspect, but over time I’ve become quite invested in it.

You would think that a company touting this Sims Tycoon element as a selling point might make it more approachable. Sadly, Fallout 4’s village crafting is notoriously clunky and full of bugs, and yet there’s something about it — maybe the challenge of getting around all the shortcomings — that I really like. It seems to me that Bethesda intentionally made settlement building a little frustrating so you would be drawn into the silliness of it. Think about it: why couldn’t they just give you proper surfaces everywhere and make everything snap together correctly every time? Part of me thinks that they screwed up a lot of things and didn’t bother to fix them, but another part thinks they meant to give players a very imperfect set of circumstances in a very damaged world.

As an example, Hangman’s Alley is a strange little rookery just northwest of Diamond City. It’s a narrow gap between two buildings, with extremely limited ground space. If you get more than about ten settlers, the place becomes unbearably overcrowded. You have only sparse locations for crops and water pumps, and the bed management is nearly impossible. The only solution (and I think Bethesda meant for you to reach this conclusion) is to build upward. 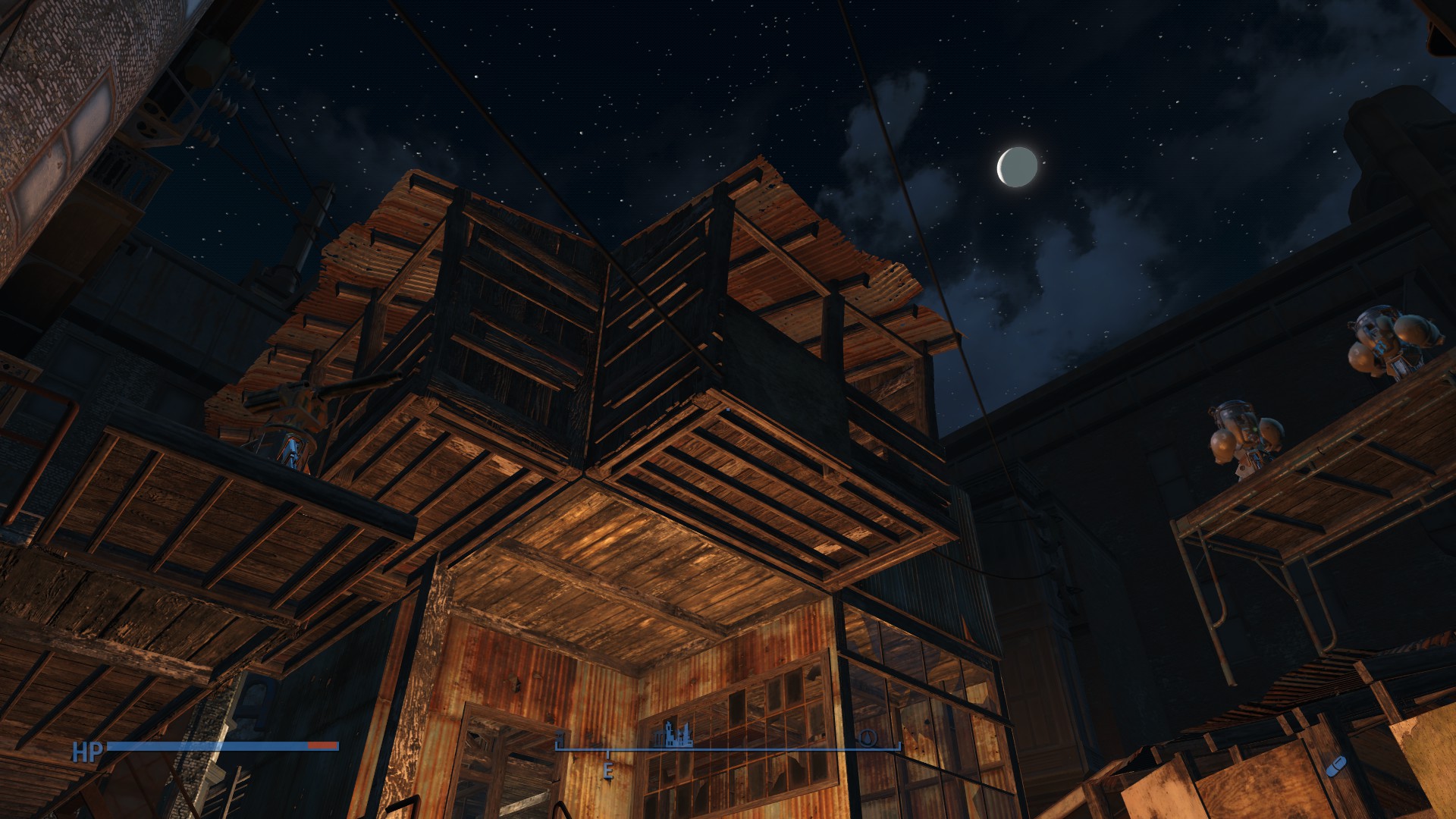 Settlers get unhappy when they can’t path correctly. They also get out of sorts when they don’t have a proper roof over their beds. Hangman’s Alley does not make pathing, bed provision, or anything else easy. You have to be especially creative with food and water management. As a “bonus,” you’ll eventually get a brahmin (one of those two-headed cows) to fertilize your crops. These animals are well known for blocking access and parking themselves in a tiny room you would like to enter or exit. You can get them to stay in a certain area if you provide them with a feeding trough, which is fine at someplace like Abernathy Farm, but where do you put it in a crowded slum? You have to make the entire ground level area a pathing and crop-growing surface, and the only way to do that is to put as much as you can in the air. 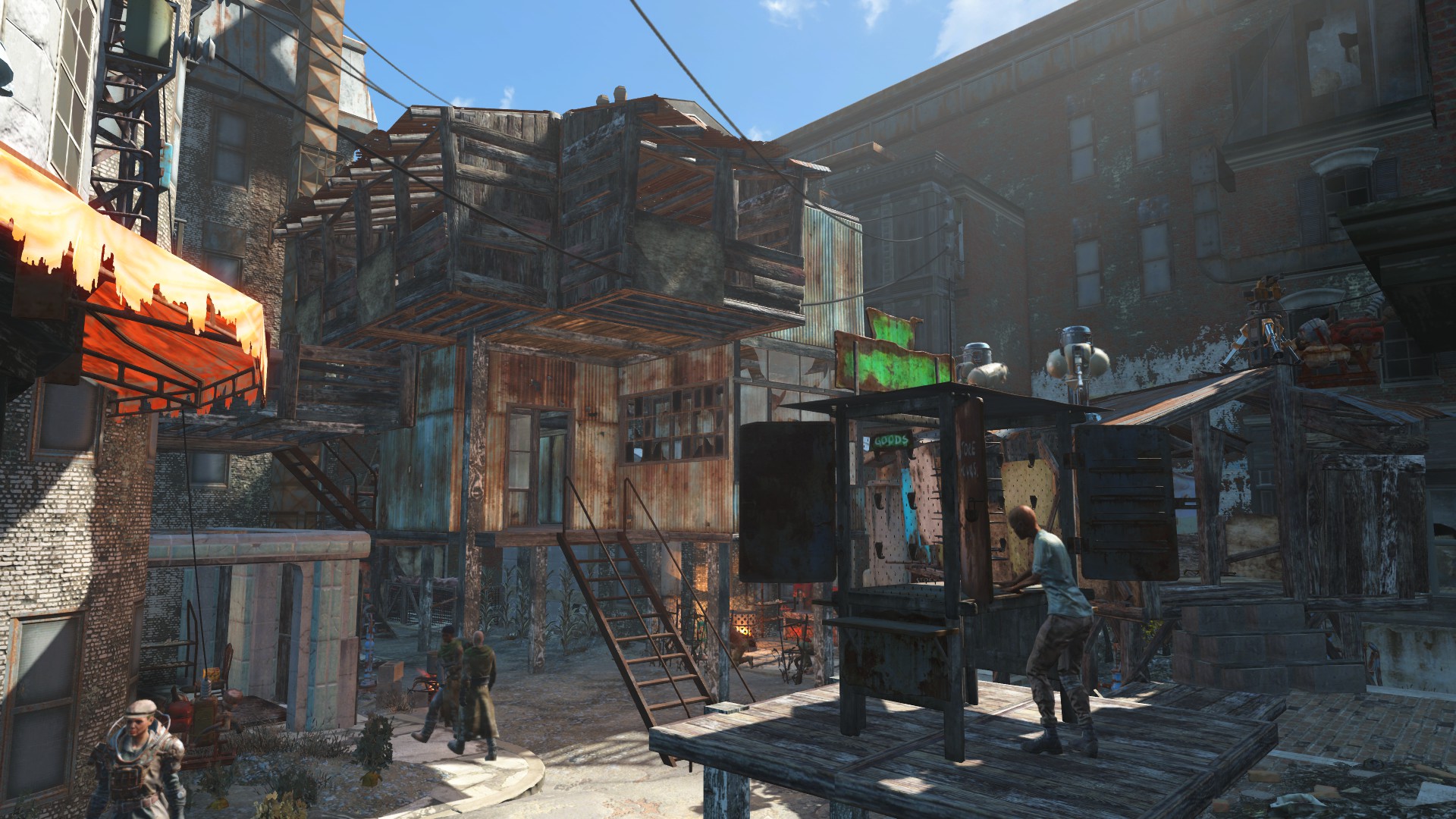 Hangman’s Alley by day. Notice all the lovely room at ground level.

This aerial solution can apply to other places that seem to give you more room but can be deceptive in their other provisions. For instance, Croup Manor is on the northern end of the Nahant archipelago. When you find it, you’re pleased that you have a decent amount of ground, and you think you’re getting a free house. The mansion is fairly spacious and interesting. Unfortunately, it’s in very bad repair and full of dead ghouls. In fact, unless you’re unusually creative, you can’t really use the house and maintain proper settler happiness levels. Also, while the grounds are more expansive than what you had at Hangman’s Alley, you don’t have that much area for crops, water, and the rest. The mansion almost overhangs the ocean, but the build area discourages the use of big water purifiers. In short, you’re more crowded and limited than you thought. There’s enough room to do things and provide pathing if you can work around the house issue. You can try to repair the house, as some youtubers have done with mods, but since I don’t like using mods, I decided to encircle the structure with my living spaces rather than try to struggle with the broken parts and the ghouls. 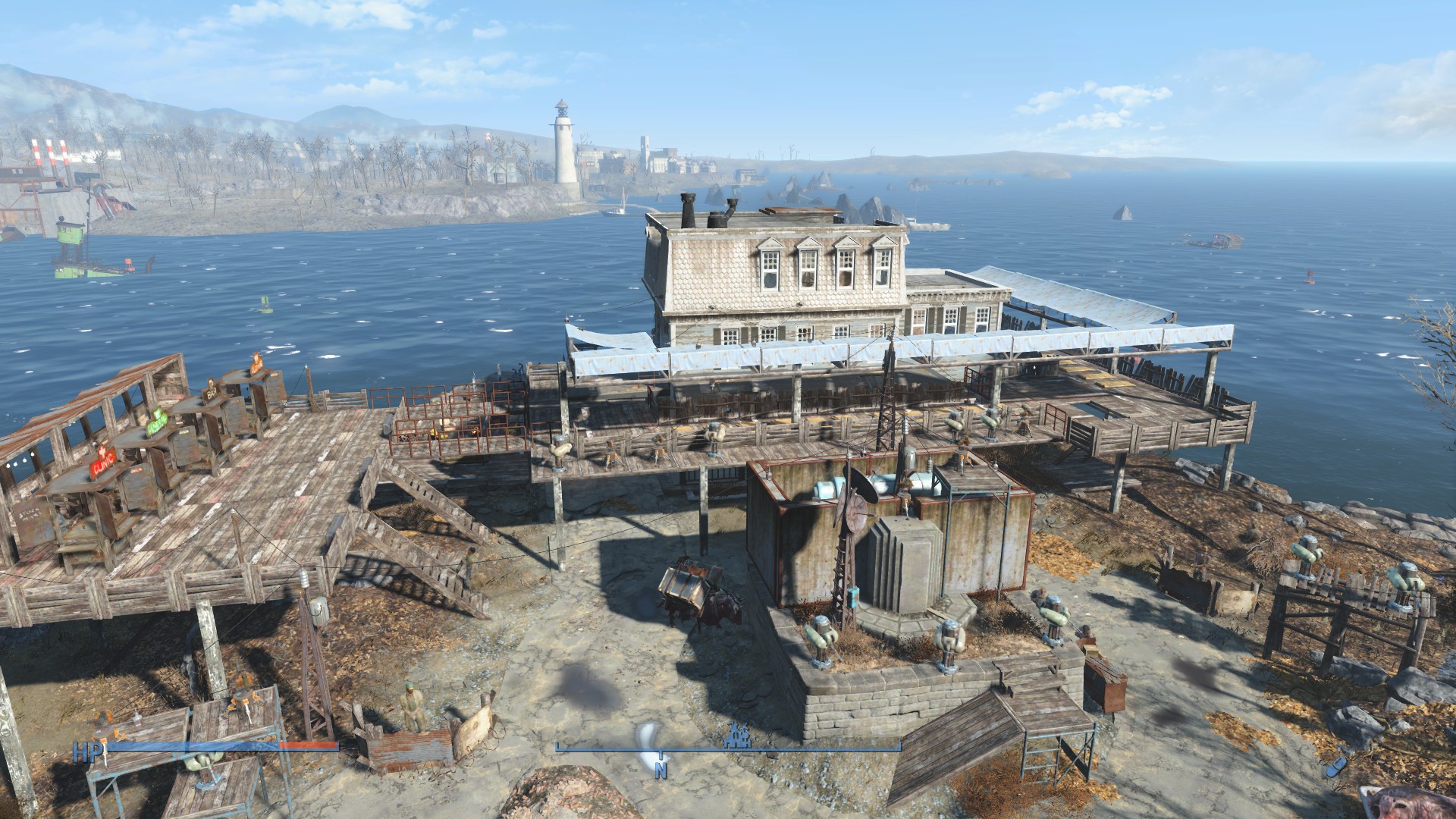 At Croup Manor, sleeping quarters and defense surround the house. My market is on the left.

An even stranger problem confronts you at Murkwater Construction Site, the southernmost settlement in the game. As the name suggests, Murkwater is a swamp. There’s plenty of room, but the ground is uneven and about half of it is calf-deep in water. It’s more difficult than one might imagine to grow crops here, and pathing becomes really problematic if you don’t watch what you’re doing. Once again, you have an onsite house, but it’s demolished and therefore useless. The aerial solution comes to the rescue. Everything goes on stilts. 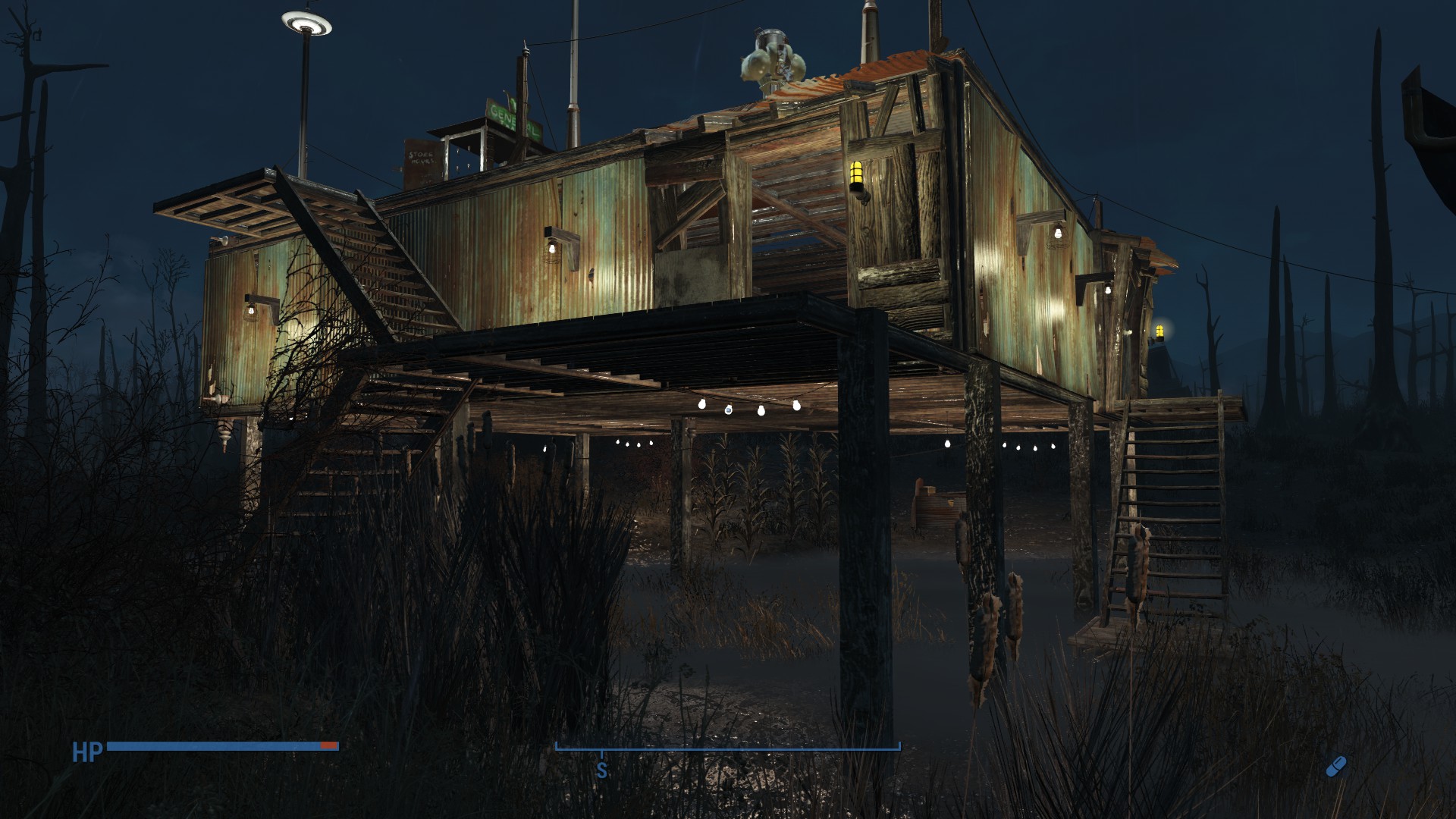 At Murkwater Construction, practically everything has to be elevated above the swamp.

Speaking of water, one of the more interesting settlements is Egret Tours Marina. Located on the Charles River, a good long walk southwest of Diamond City, this property has buildings in place but, again, they’re very damaged. The good news is that there’s plenty of water and room. Sadly, not only are the buildings generally useless for habitation; they’re laid out in such a way that getting from one structure to another is a logistical nightmare. To make proper use of the settlement, I decided to create catwalks and dogruns, a process that was more complicated than the picture suggests. 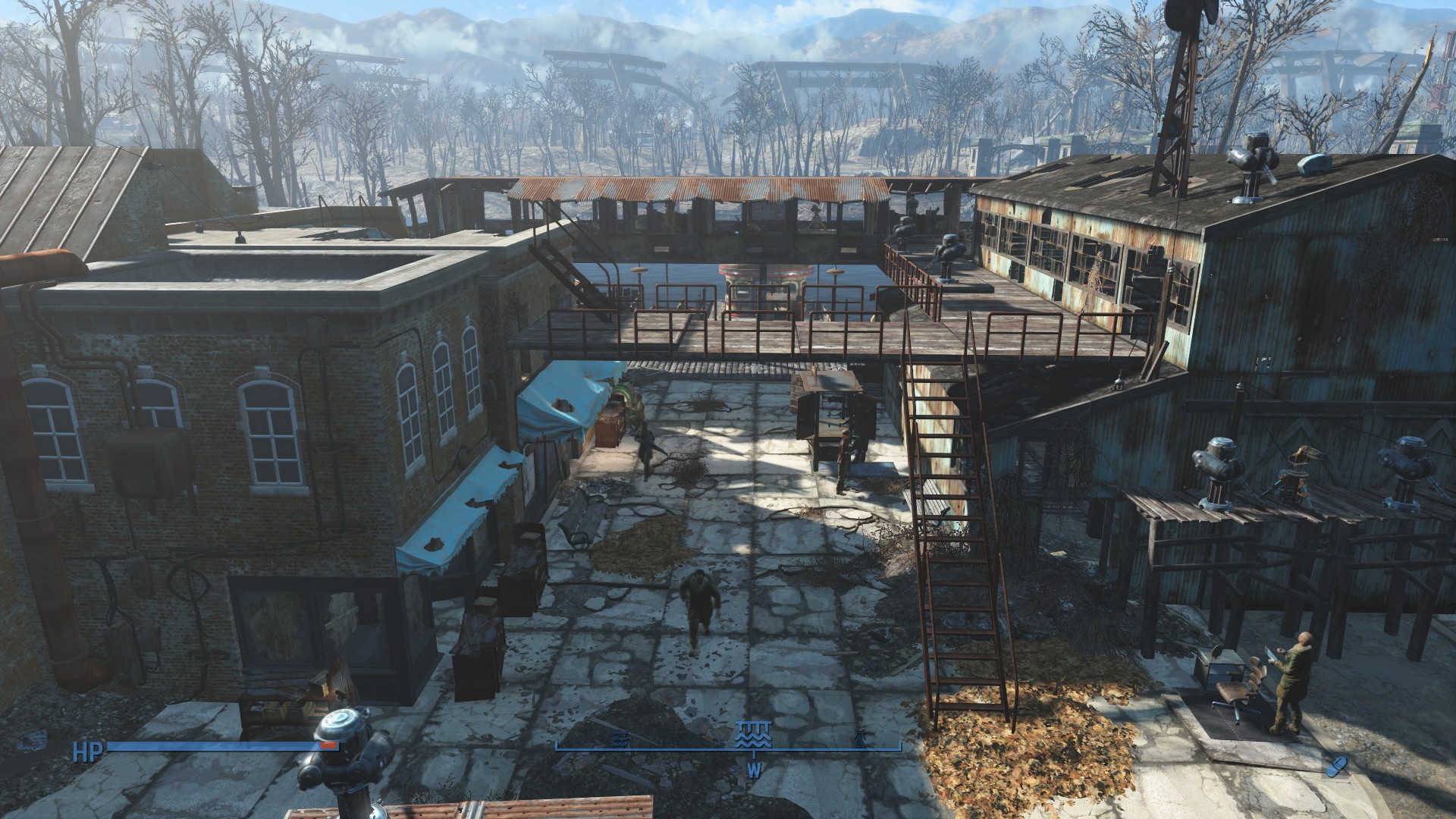 Egret Tours Marina is a lovely settlement once you connect the buildings.

But it works. I and my settlers can get from any point to any other point easily and rapidly, and that makes everyone happy. I was so pleased with the catwalk thing that I used it again at Spectacle Island, where you have to do a surprising amount of work on roofs. 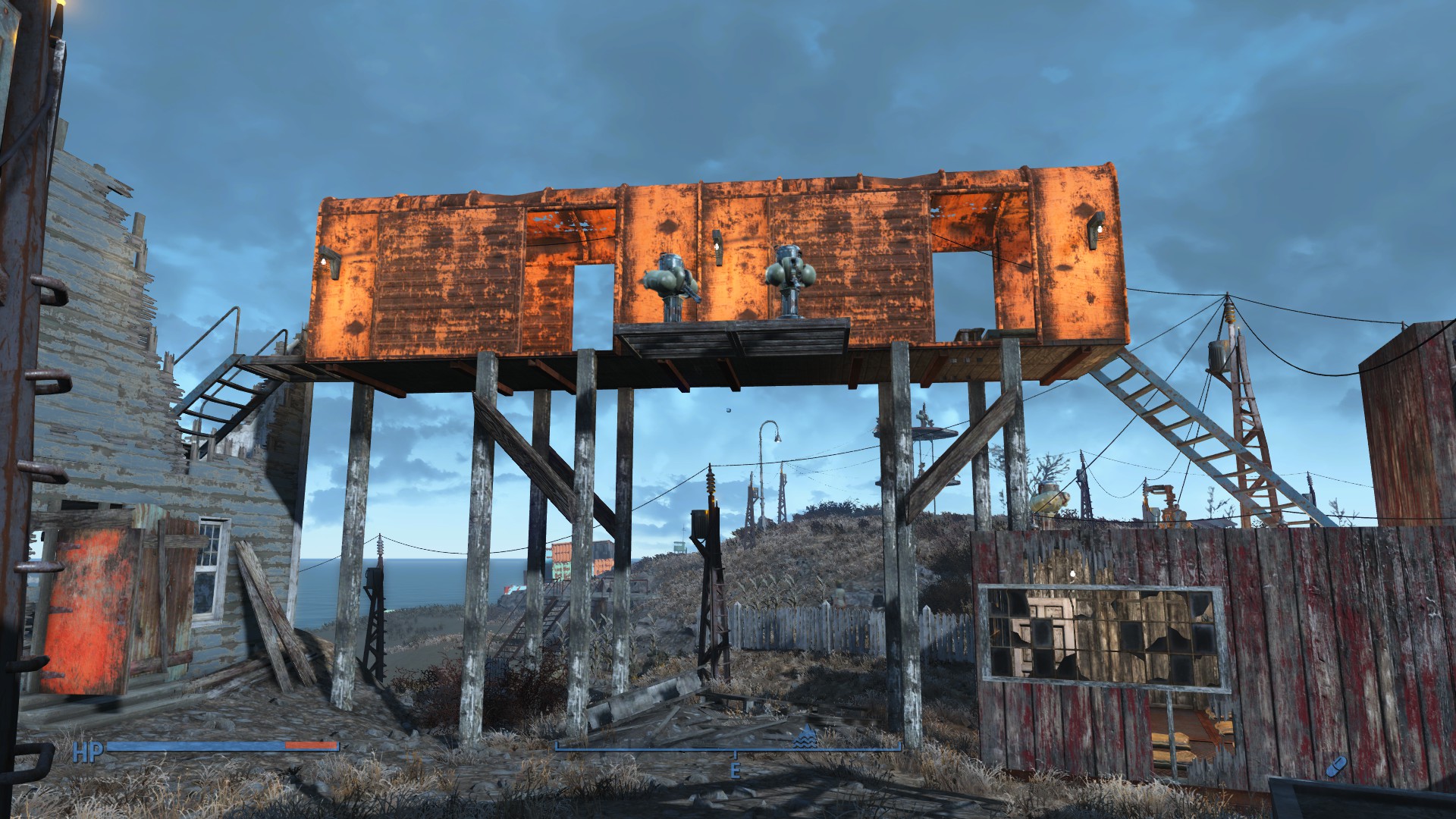 I’m especially proud of my boxcar solution at Spectacle Island.

So to sum up: I think that Bethesda made a lot of mistakes in their implementation of settlement building, but I can’t help believing that they messed up an equal number of things on purpose. The building part of the game is frustrating, but this is what makes it so interesting. Everything is a challenge. Everything requires you to be creative and come up with workarounds. This isn’t everyone’s cup of tea, but I could do it for hours.