Posted by Simmery Simulacrum on February 26, 2016
Posted in: Uncategorized. 8 comments

Has anyone here NOT seen the Thin Man series of movies? 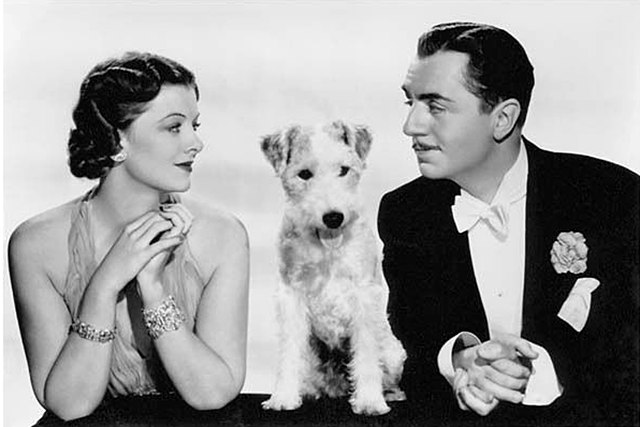 I just wondered because if you haven’t, you’re missing out on one of the best excuses for Hollywood’s existence.

I won’t go into how William Powell manages to make his character, Nick Charles, so appealing. How do you get an audience to like a drunk? You’ll have to watch the movies.

Nor will I carry on about how charming and funny Myrna Loy is and how she has an even harder job than Powell. I will merely note that Loy’s Nora Charles is always just as drunk as Nick, but you really don’t think about it. Why would you when Nora is so endearing?

If you think I’m going to natter on about how comical the Charles’ pet dog Asta is, you’re mistaken. You’ll also be disappointed when I omit how bizarre the whole milieu of the Charles’ world is. You don’t want to hear about how they’re friends with practically every criminal Nick has sent to jail, or how they have parties where the criminals and police mingle on very cordial terms, or how one of the main gags of the series is how the police and criminals always want Nick to investigate a murder and how he always refuses but somehow slips into the stream of mayhem with everyone else.

Finally, I won’t bore you with how the dialogue in this series is some of the funniest ever written.

I hope you’ll check this out on whatever market you use for old movies so I won’t be the only fan.

8 comments on “Speaking of cinema”